As reports emerge of a crisis meeting between big society architects Steve Hilton and Philip Blond, there is still notable uncertainty as to how their big idea may be operationalised at grass roots level. Paul Rainford and Jane Tinkler explore some of the available options and find that the creation of new ‘big society’ providers could offer definite benefits to local service provision in being more responsive to public needs and simplifying the institutional landscape for service users. However, big society providers cannot be seen as neat substitutes for the state and they will struggle to gain any sort of traction if funding and central support is absent or insufficient. There are also grave concerns surrounding  commissioning, accountability and redress mechanisms for which the government seems to lack coherent solutions.

Soon after taking power in May 2010, the coalition government announced that it was putting ‘big society’ provision at the heart of public sector reform. The big society programme is built around five policies that include giving communities more powers, and encouraging local people to take more active roles in local service. The Cabinet Office’s ‘Building the Big Society’ paper states:

At present though, despite intense media coverage, the details of these policies are still sketchy. Even Francis Maude, Minister for the Cabinet Office, admitted: ‘The big society is a big idea, not a big plan’.

Many critics, including the Labour Party, have alleged that the idea of big society is deliberately vague as it is essentially a cloak to disguise government disengagement from previous levels of intervention, whether assisting in local economic development or in providing social welfare. In this view, the rhetoric and practices of local socialism are being co-opted and then distorted for a more traditionally conservative state-shrinking agenda. Trade unions such as Unite believe that the big society is a smoke-screen to hand the provision of public services over to the market.

Debate on these points will continue, but it is reasonable to suggest that supporters and critics alike need to start engaging with discussions about how the big society, as it is currently being articulated, may be operationalised. Put simply, how might big society public services be designed? Is the big society even supposed to be designed, or is the government looking for something more organic or even anarchic?

What is immediately apparent when looking at the way definitions of organisations such as social enterprises, co-operatives and mutuals are banded about both in official discourse and the media, is that there is very little understanding of how they are constituted and what they do. A recent paper published by the LSE Public Policy Group attempts to demystify some of these terms and emphasises that in fact these types of organisation share many similar characteristics. Organisations can be mutual co-operatives, employee-owned co-operatives and for-profit social enterprises. Some types of organisations are still theoretical as they have only been proposed and not so far been constituted. A quick UK press search reveals that the provider type most commonly referred to is social enterprise (see Figure 1 below), which seems to almost have become a ‘catch-all’ term for voluntary sector organisations. 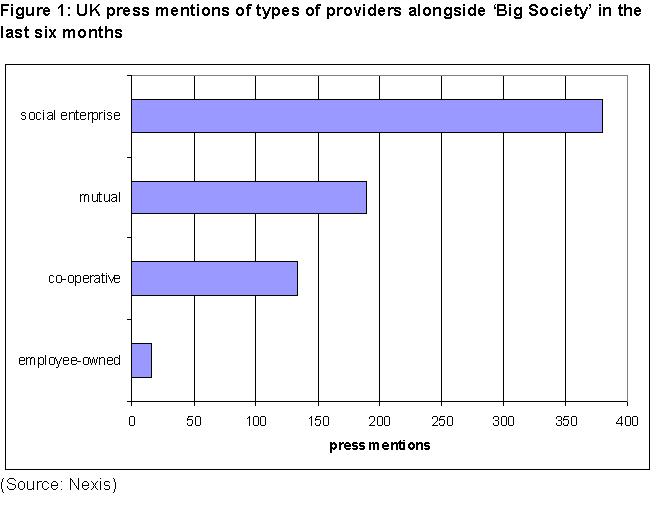 One key issue is whether the general set-up and capacity of these organisations is such that they will be able to provide better and/or cheaper public services in this era of austerity and beyond. It seems possible that by opening up public service delivery to new ideas and energies, local authorities could be able to share costs, diversify risks, prevent duplication and encourage collaboration with (and thereby learn from) the wider business and voluntary sectors who are engaged in fields of shared interest. Co-production with smaller and more flexible provider types would allow for particular user groups to receive localised and targeted services.

Moreover, by encouraging a ‘customer focussed radical disintermediation’ in public services – that is the stripping out of intermediaries in the delivery chain and the simplification of the institutional landscape – and by seeking to curtail top-down imposed changes, there could be greater needs-based provision that is able to adapt in real time to problems, thus driving up quality and performance. People who are denied services but may be able to afford to fund them themselves would be able to replace public service provision with mutual service provision – as in the case of Mutual Retirement Housing – but this would be to the exclusion of those who could not afford to self-fund similar services.

The quintessential ethos and the principles and values of co-operative enterprises in particular resonate with the big society rhetoric and the prospect of service providers and users working together for mutually beneficial outcomes is naturally appealing. However, David Rogers, the Executive Director of CDS Co-operatives has argued that it would be a fallacy to suggest that better outcomes could be provided at lower costs – rather better services may be designed in collaboration with big society type providers, but for the same costs.

Co-operatives, social enterprises and mutuals are not neat substitutes for government and cannot be expected to fill the breach if funding and central support is absent or insufficient. There are real capacity-building issues that need to be addressed as the government’s cuts threaten to strip out any capability the state may have to support the big society – not only in terms of funding but also in the provision of skilled input from lawyers, research organisations, public policy experts etc. Commercial workshops have been established and there are great promises of a Big Society Bank, but whether this is to be a first port of call or a last resort, and how much money it will have to distribute, is still unknown.

Big society providers thus cannot be seen as a way to cheaply devolve services that the government or local authorities consider no longer affordable. They will need to be economically viable with sound business models. There is real concern that the government’s austerity programme of cuts is too fast and too deep to be either realisable or to stop the economy from lurching into permanent slow growth or even deflation.

There are additional concerns about the creeping privatisation of the public sphere. The part-employee-owned company Circle that won a contract to run Cambridgeshire’s Hinchingbrooke hospital in November 2010 is half owned by venture capitalists. This may provide the necessary liquidity to operate as a business but it raises questions about public tolerance of private capital in public services, and whether private investors will seek to siphon off the most profitable parts of public enterprises while leaving the rest the fall by the wayside.

There needs to be serious discussion as to whether public assets are to be locked in if services are transferred to non-state providers and what the appropriate response would be to drastic differences in local provision (early indications suggest that fear of postcode lotteries cuts less ice with coalition ministers than it did with their Labour predecessors). It is uncertain as to whether local authority staff will be transferred over to new providers – with the attendant TUPE implications – and whether their new employers will share the public service values and commitment to comprehensiveness and universality upon which many users depend.

Indeed local councillors are elected on the very basis of upholding such values and they cannot simply abdicate the responsibility to their communities that is a condition of their democratic mandate. Big society providers will be delivering services for which they are not clearly accountable – indeed there is nothing intrinsic to civil society/employee-owned organisations that makes them democratic, even to their own members – and there are grave sensitivity issues surrounding provisions that relate to social care or protection services.

Redress system weaknesses also show up strongly in the case of outsourced services, where citizens and customers are often being left to shuttle to and fro between the funding/contracting council denying responsibility for the operational delivery of services, and the service provider disinclined to meet public sector standards of responsiveness. Indeed, what happens when citizen redress is ignored by the new big society providers is currently left unexplained by the coalition government. As Sir Andrew Foster noted; ‘the public want choice but with appropriate support and safeguards. Local control of services is popular but only within the context of proper equality and accountability frameworks’.

Decentralisation and cooperation vs. competition and economies of scale

There is a tension at the very heart of the government’s strategy between promoting cooperative enterprise and voluntarism on one hand, and the wider thrust towards increasing competitiveness in virtually every sphere – perhaps most prominently in the further development of markets in education and health care – on the other. Existing arrangements around commissioning restrain the capacity of many public sector organisations to transition and flourish in cooperative ownership. How can commissioners commission services from new providers who lack a strong record that would allow them to competitively and effectively tender with large scale private companies?

The drive to decentralise and promote small, cooperative style big society service provision is thus at odds with the necessary economies of scale that the new organisations would need to compete in a bitterly difficult economic environment. The government may decide to consider well-being impacts or quota systems when tendering out services in the hope that this would accommodate new big society providers, but they would have to ensure that any action in this area did not contravene EU procurement rules.

Employee owned organisations are membership- and place-based, and need a great deal of organising. In this sense they are somewhat restrictive, if generally resilient. While proximity and face-to-face contact remain key human drivers in mobilising an increasingly time poor and commitment phobic populace, a digital era big society could provide a new strand for development. Digital big society organisations could create open source public services and develop new types of interactive organisations online. Such a model would only be applicable to certain services but public libraries could, for example, develop a national e-book database that could be maintained and updated by groups of individuals working separately in time and space.

Whatever eventual form big society providers take, the fundamental principle should be that the motivation for adopting a new form of ownership develops organically from genuine grass roots pressure for co-production. To superimpose organisational change on services would continue the dictatorship of Whitehall over the localities and a reluctant big society will neither encourage  better local provision nor improve national prosperity.

Posted In: Central government and core executive functions | Economy and Society | Innovating through design in public services | Localism and the Big Society | Public Services and the Welfare State