Major changes to the structure of the NHS were announced by the Conservative-Liberal Democrat coalition government almost as soon as the ballot papers had been counted and the ink had dried on the coalition agreement. But what problem is the government intent on addressing with these changes? Seán Boyle argues that the previous 13 years of Labour management of the NHS, while by no means perfect, resulted in some significant improvements, and there is no reason to believe these would not have continued under the structure that had already emerged. What no one seems to have wanted – from health care professionals to managers to patients – was the potential wholesale disruption of the service, seemingly for its own sake.

There has been a somewhat sterile debate recently about whether there will be a tiny increase in real spend on the NHS over the life of the current government with ministers insisting – even in the face of worrying increases in inflation which threaten to blow the government’s assumptions out of the water – that they will honour a pledge to increase real expenditure on the NHS. But this is really not an argument worth having. The government’s instinct to introduce yet more structural change to the NHS at a time of financial stringency may prove the undoing of both.

To understand why these changes will be so damaging, it’s important to look at the recent history of the NHS. The European Observatory on Health Systems and Policies has just published a comprehensive account of the English health system which assesses developments in the NHS particularly in the last 13 years. Perhaps the single most significant factor between 1997 and 2010 was the large increase in public expenditure on health care which almost trebled (in cash terms) between 1996/97 and 2010/11. Much of this extra money was taken up by increases in the number of frontline staff, pay rises, increased capital costs and increases in costs associated with improvements in care through, for example, the implementation of national service frameworks and NICE recommendations. Despite this extra funding, there is evidence that the NHS failed to achieve overall improvements in productivity. However, there was substantial progress in some areas, particularly in improving access to elective care. Moreover, surveys have shown that the public have approved of the changes.

In the latest British Social Attitudes Survey in 2009, 64 per cent of the public were either very satisfied or quite satisfied with the way the NHS is run, a substantial increase from 2001 when the proportion was only 39 per cent. In fact this is the highest level of satisfaction since the survey began in 1983. This seems to be true whether people identify themselves as Conservatives, Liberal Democrats or Labour; for all three parties satisfaction was above 60 per cent and was at its highest level since the survey began.

This spending was accompanied by a continuous programme of transformation of the NHS. Chief among the changes introduced by successive Labour governments since 1997 were: the introduction of Payment by Results, an activity-based payments system mainly used in hospitals; the expanded use of private-sector provision; the introduction of more autonomous management of NHS hospitals through Foundation Trusts; the introduction of patient choice of hospital for elective care; new GP, Hospital Consultant and Dental Services contracts; the establishment of the National Institute for Health and Clinical Excellence (NICE) and the expansion of its remit to include the development of comprehensive guidelines for all services; and the establishment of the Care Quality Commission to regulate providers and monitor quality of services.

However, NHS productivity did not increase over this period. The most recent measure, which includes an element for quality improvements, shows NHS output increased rapidly between 1997 and 2008, at over 4.5 per cent per annum, but the increase in the value of inputs was even greater at almost 4.75 per cent per annum.

Nevertheless, the NHS made substantial progress in some areas, particularly improving access to elective care, and, to a lesser degree, outcomes. Up to March 2010, waiting lists had halved and people were waiting less time for treatment. Waiting lists fell from 1.3 million in 1998 to under 600,000 in 2008. The median average wait for elective treatment (eg hip replacements, heart surgery) fell from 12.7 weeks in 2002 to 4.3 weeks in 2010. We do not know how many people are waiting for treatment now because the government decided that these figures were no longer to be made publicly available. However waiting times appear to be on an upward trend again.

There is also evidence that for example stroke care has improved with, between 2000 and 2009, a 25 per cent reduction in mortality rates following admission to hospital. However, it would be naïve to argue from one or two examples that health care in the UK is better than it was, or better or worse than that in other countries. Not only is measurement notoriously difficult but a view of the whole system of care and how it is performing is needed, as apparent improvement in one dimension may be reflected in decline in another.

One failure of previous Labour governments was in the area of reducing health inequalities. Despite various policies intended to alleviate these inequalities, the position has worsened, even though the health of the population overall has improved. The current government has said it will not put up with the unfairness of variations in health care standards across the country; yet in its proposed reforms there is little sign of policies that will make a real impact on the disparities in UK health outcomes that have been a feature since time immemorial. Just like its Labour predecessors, the present government will find that wishing inequalities away simply does not work.

In direct contradiction to some of the statements made by coalition government politicians, the UK still has one of the lowest spends on health care of the major developed countries. Public expenditure increased considerably under previous Labour governments, which was not a bad thing, but total expenditure (including private and public) is still well below that of most of the rest of Europe, or for example Canada, the USA and New Zealand. Figure 1 below based on the latest OECD data (for 2008) shows that UK expenditure on health care as a proportion of GDP is still over one percentage point below the average for the original 15 EU countries, 2 percentage points below that of Germany and Austria and 2.5 points below that of Belgium and France. Apart from countries that joined the EU more recently (since 2004), only Luxembourg and Finland spend less, as a proportion of GDP.

Figure 1: Total health expenditure as a proportion of GDP: comparison between EU countries, 2008 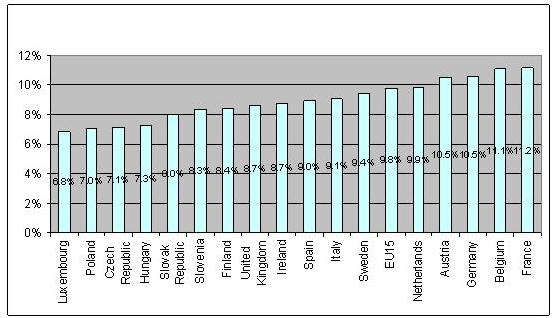 Looking at the issue in terms of total spend on health care per head of population, the latest comparative data (for 2008) show that the UK spends between 20 and 30 per cent less than countries such as the Netherlands, Belgium, Austria, Ireland, Germany and France. If the UK spent at the level of France or Germany this would be the equivalent of an increase in the health care budget of some £20 billion.

Does this sound like a situation that requires radical root and branch reform? Based on our extensive research and analysis, the answer is surely no. But this is what the Coalition’s new Bill is proposing. Already before the Bill has been passed the NHS is in the throes of preparation for significant changes to its structure. And this is happening at a time when the financial framework that the NHS faces over the next five years will be very different from that of the last ten years. The key question is whether an NHS that found improvements in productivity so difficult to deliver at a time of record increases in expenditure will find it any easier as real spending begins to fall back.

While there is always room for improvement in health service provision, the lesson of the last 10 years has been that if we increase spend to even approaching the lower slopes of that of the other main EU countries, then we get better health care – and people are happier to use the NHS. The discredited attempts by this government to suggest we are lagging way behind the rest of the world in the quality of our care are just that, discredited: false conclusions based on faulty and misapplied statistics.

There will be increased demand for health services in the future. But that is not news. Past governments have always viewed a future predicated on the need for increased spend due to an ageing population structure and the need to embrace new technologies – although predictions have often been little more than finger-in-the-air exercises. Nevertheless, there is no credible link between the changes proposed by this government and increased efficiency to meet these new demands.

Now is the time for the government to admit that it was a mistake to take an axe to a service that was performing well both when compared to its past and to what we observe in most other countries.