The apparent disproportionality of our current First Past the Post system is at the heart of the current debate on electoral reform, with many seeing Proportional Representation as being the best solution. But how has public opinion responded over the years? Stuart Wilks-Heeg and Stephen Crone of Democratic Audit have examined opinion polls since the 1970s and have found that while public opinion for and against PR has waxed and waned, opinion has hardened in the wake of the events which had led to the May 2010 hung Parliament.

There is fairly widespread agreement among British political scientists that ‘first-past-the-post’  elections in the UK have not operated as they ‘should’ since at least the mid-1970s. The symptoms of our malfunctioning electoral system are clear. First, FPTP increasingly delivers either excessive majorities or ‘hung parliaments’. Second, despite declining levels of support for the two main parties, FPTP blocks the emergence of a multi-party system. Third, in light of the first two trends, FPTP produces increasingly disproportional results. Fourth, in the face of a shrinking number of marginals, ‘voter power’ has become highly uneven.

But what about the perspective of the voters? This may seem an odd question to ask on the day of a national referendum on electoral reform.  Yet, with turnout expected to be low, and the referendum in danger of becoming a plebiscite on Nick Clegg, we might wish to consider long-term evidence on the extent of popular support for electoral reform.

In a new Democratic Audit briefing, we examine the trends in a total of 49 opinion polls which put questions on electoral reform to a representative sample of the British public between August 1974 and 2010. By grouping these polls according to question phrasing, it is possible to identify some indicative trends in public opinion during the ‘dysfunctional’ period of FPTP elections which stretches back to the two elections in 1974.

The first set of questions which have appeared regularly in opinion polls relate to the general principle of proportionality, without specifically citing PR. They typically ask respondents to indicate whether they agree or disagree with a statement along this lines of ‘this country should adopt a new voting system that would give parties seats in Parliament in proportion to their share of votes’. Our first chart shows the results from eight such polls from 1982 to 2010 and indicates a consistent majority in favour of such a principle – with 60 per cent typically supporting the statement compared to around 20 per cent against and another 20 per cent responding with ‘don’t know’.

Responses to opinion poll questions which invoke the general principle of PR, without referring to it explicitly 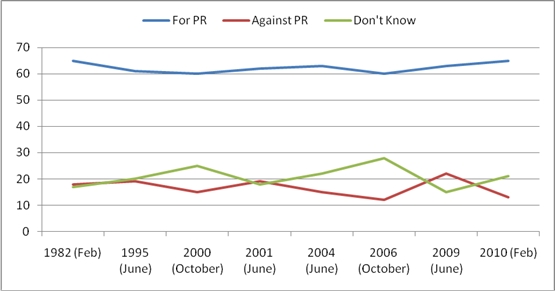 However, polls which do make specific reference to proportional representation suggest a different pattern of public opinion. We have been able to identify 16 opinion polls from 1977 to 2010 which asked respondents, in a straight question, whether they would support the introduction of PR for elections to the House of Commons.

As our second chart shows, these polls suggest that, from 1979-2008, some 40 to 50 per cent of the public typically favoured PR, while 20 per cent were against and 30-40 per cent felt unable to give an answer. However, during 2009 and 2010 there was evidence of significant shifts in public opinion. In May 2009, at the height of the MPs’ expenses crisis, the proportion favouring PR rose to an unprecedented 70 per cent, while those responding with ‘don’t know’ fell below 10 per cent for the first time ever. Public opinion appeared to shift dramatically again the following year, around the time of the 2010 General Election. By May 2010, support for PR had again fallen back to around 50 per cent, but those opposing it had risen to an all-time high of 40 per cent, suggesting that opinion was beginning to harden against electoral reform in the wake of the events which had led to a ‘hung Parliament’. 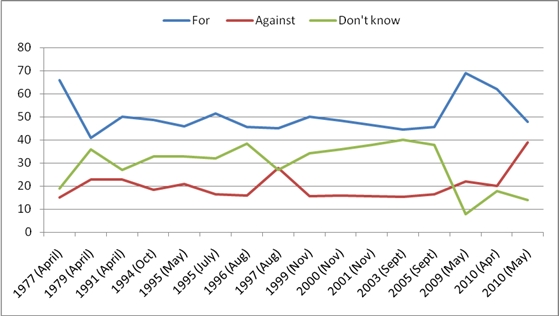 The plausibility of this interpretation is reinforced by the data in our third chart, which are taken from the British Social Attitudes Survey (BSA). On 16 occasions since 1974, the BSA has asked whether respondents would prefer to change the electoral system so that it provides ‘fairer shares’ to smaller parties or retain the existing system, which is deemed to provide ‘effective government’. The results  are not only remarkably consistent, showing in every instance around 60 per cent support for FPTP, when defined in this way, but also suggest that UK voters prefer ‘effective government’ to ‘fair shares’ by a ratio of 2:1. 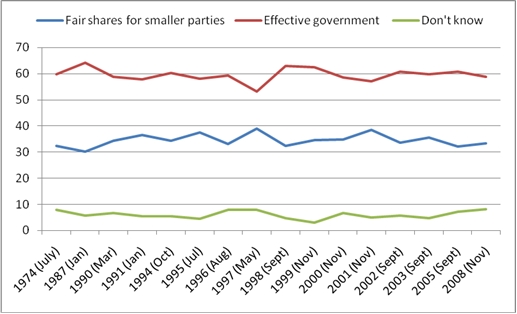 Note: The precise question used is ‘Some people say that we should change the voting system to allow smaller political parties to get a fairer share of MPs. Others say we should keep the voting system as it is, to produce more effective government. Which view comes closer to your own?’

The trends we are able to identify from opinion polls therefore appear to offer no clear evidence of a public desire for change. On one level, it could be argued that public opinion, while consistent, is also deeply contradictory – expressing support for proportional representation in theory, but not in practice.  Alternatively, it could be argued that it is perfectly logical to support the principle of proportionality or ‘fair shares’, while also regarding an electoral system which produces ‘effective government’ as preferable to one which produces ‘fair’ results. Either way, what seems clear from polling data is that, while political scientists may confer about the dysfunctionality of FPTP, the public may not necessarily see proportional representation as offering a superior system.

But what about AV?  Prior to 2010, there were remarkably few polls which asked the public about AV, so it is difficult to identify any long-term trends for how the public view this particular system.  Yet, there is a case for arguing that the patterns found in the opinion poll evidence cited above should point towards a high level of public sympathy for a system such as AV. If the public would generally prefer a voting system which is fairer to other  parties, but are reluctant to forgo the prospect of the system returning ‘effective’ – that is, single-party – governments, then AV makes intuitive sense as a reform option. Whether the electorate feels that way on 5 May 2011 is, of course, quite a different matter.

Democratic Audit’s briefing on the AV referendum can be found at: http://www.democraticaudit.com/av-referendum-briefing