Is Northern Ireland likely to have no government for the forseeable future? Will direct rule from London be implemented? And are demands for a referendum on leaving the UK and uniting with the Republic of Ireland becoming harder to resist in the context of Brexit? John Garry gives an overview of how events could unfold.

The Northern Ireland Assembly election on March 2 has not only failed to lead to the establishment of a government, as elections in ‘normal’ democracies might be expected to do, but has raised broader questions, including that of direct rule from London and, following hot on the heels of Nicola Sturgeon, that of a possible referendum.

The most immediate obstacle to the re-establishment of the Sinn Féin/Democratic Unionist Party power-sharing government is Sinn Féin’s refusal to do business with Arlene Foster, the DUP leader who they regard as responsible for a major policy mistake relating to the ‘Renewable Heat Incentive (RHI)’ scheme (‘cash for ash’ in local language) which could potentially have cost taxpayers up to half a billion pounds. Sinn Féin demand that she ‘stand aside’ while an inquiry into the handling of the scheme is completed. The DUP, however, is showing little enthusiasm for throwing its leader overboard, especially at the request of bitter rivals.

And the RHI issue is just the tip of the iceberg. Sinn Féin is also annoyed at what it regards as DUP intransigence on a range of issues directly related to the underlying nationalist versus unionist debate, such as Sinn Féin’s desire for an Irish Language Act.

So, it is no surprise that reaching a post-election agreement is difficult. Sinn Féin collapsed the power-sharing government on a ticket of being unable to work with the DUP and a demand for Foster’s head. The electorate, however, when offered the ingredients of democracy decided to serve up pretty much the same dish again, albeit somewhat colder: Sinn Féin and the DUP retained their positions as the biggest parties in the land. Under Northern Ireland’s power-sharing rules, the leaders of both parties should assume the joint prime ministerial positions (first minister and deputy first minister).

If this does not happen within three weeks of the March 2 election day, the Secretary of State for Northern Ireland, James Brokenshire, is obliged to call another election. Although the increase in turnout at the election (up 10 percentage points) suggests an appetite for democratic engagement, yet another election would surely try the patience of many voters. The alternative is for Brokenshire to introduce ‘direct rule’ from London, essentially suspending devolution and power sharing.

With London rather busy on other matters at the moment, the idea of running Northern Ireland and engaging in protracted talks for many months with squabbling Sinn Féin and DUP leaders is somewhat unpalatable. So, Brokenshire will be hoping for a deal between the two parties and will be threatening another imminent election in order to focus minds and expedite a deal.

The issue of Brexit, however, adds a whole other layer of complexity to matters. Nicola Sturgeon and Scottish nationalists have demanded a referendum for Scotland to leave the UK in the ‘new’ context of a Brexit in which Scotland voted to remain. Similarly, Gerry Adams and many Irish nationalists are demanding a referendum for Northern Ireland to leave the UK (and unite with the rest of Ireland) in the context of a Brexit in which Northern Ireland voted to remain.

A demand for such a referendum in Northern Ireland (a “border poll” in local parlance) is also in the context of nationalists performing well in the Assembly election and unionists performing poorly. Sinn Féin increased its vote share by four percentage points and the DUP declined by one point. Only a tiny number of votes separate the parties, with the DUP ahead by just 0.2 percent. To some extent, this good performance by Sinn Féin boosts its case for a ‘border poll’.

Interestingly, one of the largest parties in the Republic – Fianna Fail – has further raised the salience of the issue by stating that it is working on a detailed blueprint for how a united Ireland would operate. However, it is on the basis of opinion poll evidence rather than purely electoral success that the Secretary of State will decide whether to hold a border poll or not. Such polling evidence typically shows low levels of support for Irish unity, though this is unlikely to curb Sinn Féin’s enthusiasm for a referendum.

Overall, Northern Ireland’s post-election political landscape is highly uncertain and, particularly in the wake of Sturgeon’s announcement, mirrors the constitutional uncertainty of post-Brexit UK as a whole. 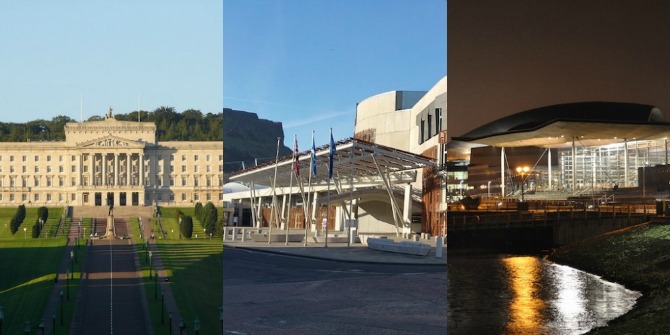