The government’s commitment to behavioural change is starting to be taken up by both central government departments and local authorities. Paul Rainford and Jane Tinkler look at the benefits and problems associated with so called ‘nudge’ theories and how this approach is being used in the UK.

In 2008 Richard Thaler and Cass Sunstein published a book entitled Nudge: Improving Decisions About Health, Wealth, and Happiness. It draws on the emerging disciplines of behavioural economics and social psychology to explain why people often act in ways that are against their interests – that is the maximisation of welfare – as defined by classical economics

The authors argue that this discrepancy between interests and actions reflects the fact that we are driven by two different, but interlocking, systems. The first system represents an individual’s cognitive capacity, which is limited but can result in deliberate and considered choices that reflect shifting priorities and values. Many public health initiatives are directed at this capacity by focussing on providing information and assisting the self-creation (and regulation) of long-term goals through different forms of motivation and incentivisation. The second system, by contrast, is automatic and sub-conscious, and is largely conditioned by the environment in which choices are made.

It is via this second system that it is possible to ‘nudge’ people into making certain ‘beneficial’ choices. Thaler and Sunstein believe it is legitimate for governments to design environments and contexts – the ‘choice architecture’ – in which people make decisions in order to make it easier for them to maximise their well being. They counterbalance this by an insistence that people should ultimately still be free to make their own decisions as the choice architecture should still leave all possible options open.

Writing in the British Medical Journal Theresa Marteau et al. note that ‘the appeal of nudging [for government] is self evident: it proposes a set of seemingly simple, low cost solutions that do not require legislation and can be applied to a wide array of problems arising from our behaviour’. In addition, ‘the absence of legislation holds particular appeal for governments and others wanting a smaller role for the state in shaping the behaviour of its citizens’.

Indeed, nudge has been enthusiastically taken up by the Coalition as one of their Commitments from May 2010, in which they pledged to incorporate behavioural insights into the wider policy planning agenda. The Behavioural Insights Team was subsequently created and is now based in the Cabinet Office. It is tasked with working on improving health, encouraging charitable giving and protecting the environment. The Unit will draw on the MINDSPACE framework.

Figure 1: A summary of the main influences outlined in the MINDSPACE framework The behavioural agenda is already being adopted: a report from the Department of Health entitled Applying Behavioural Insight to Health (2010) laid out nine case studies in which new or trial programmes would be implemented. These included the use of social norm techniques for tackling excess alcohol consumption in universities, a prompted choice system for organ donation, and a smoking cessation trial in partnership with Boots.

In this work, emphasis is placed on enhancing confidence and self-efficacy of those involved – namely a belief that change is possible through effort and perseverance – by a process of supported self-regulation. This may include face-to-face support to encourage the use of contraception and reduce rates of transmission for STIs, cognitive behaviour therapy to help deal with depression and the combined use of GPs and nutritionists to advise on diet and exercise.

Encouraging self-efficacy is also about control (over one’s self and also the external environment) so that individuals feel able to determine their own futures and work towards better behaviours. Individuals and their communities are given a set of tools designed to empower them to address their own needs and make healthy choices. Direction that is provided by figures that are largely trusted – for example GPs – is a key part of this process in encouraging the belief that change is possible. The level of support required will vary from individual to individual, and even for the same individual at different times and stages. The self-regulation cycle is summarised in Figure 1 below. 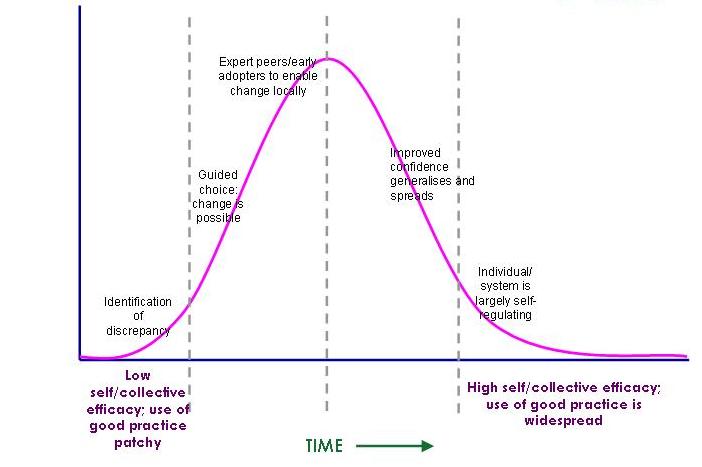 Similar methods can be used to instigate behavioural change in organisations and collective groups of people. As with individuals, change is more likely to occur – and best practice more widely diffused – when it is voluntary rather than coerced, and there is active buy-in from influential leaders willing to act as role models.

Swindon Borough Council has applied behavioural insights to the design of a new Swindon Family Project. Pre-project estimates put the number of families in Swindon living in chronic crisis and facing multiple difficulties at above one hundred. The new design was intended to focus on joint decision making and developing positive social networks that would empower families and lead to behaviour change. One major underlying problem that had previously been identified was that under pre-existing arrangements, council workers were spending less than a quarter of their time on face to face or direct service delivery, with the rest of their time taken up in dealing with the “anxieties in the system” – namely the administration, red-tape and bureaucracy that was intrinsic to the process. As such services were often spinning around families rather than engaging with them, and attempted solutions were coercively imposed rather than co-produced and willingly adopted.

At the start of the Swindon Family Project, invitations were sent out to families and council workers alike, inviting them to take part. Both sides had to accept the invitation and agree to join the project. Families had the chance to interview the relevant council workers to select the ones that they wanted to engage with. An emphasis was placed upon establishing a productive relationship based on trust, empathy and reciprocity rather than emotional detachment, imposition and hierarchy.

An eighteen year time-line for the each family (12 in total) was charted, identifying crisis points and engagements with public services, in order to develop a rich picture that would inform future action. Families were encouraged to design their own solutions and mind-map their own agendas for change. This feeds in to a twelve point model that charts development and pushes towards an exit point for families once real change has been made.

The results from the project have so far been impressive and give plenty of reason for optimism:

Beyond even these tangible benefits, the intrinsic value of working with families – as opposed to doing things for or to them – and harnessing their active participation in bringing about positive change marks a bold and highly promising new departure. The project sharply challenged the assumption of a lack of aspiration amongst families in crisis, and it tapped into the behavioural insights that show the close link between behaviour and identity, and which emphasise the role of social networks.

These case studies show that behavioural insights have an important role to play in redesigning more user focused services that better understand and are more responsive to environments that influence people’s choices. They can help to recalibrate existing tools by bringing a human touch back to over-bureaucratised and impersonal services, and harnessing aspiration as a major catalyst for change.

There is research to suggest that positive and supportive messages of change are more effective than those that seek to shock or patronise. This should mean that leaders of the agenda – including and especially ministers – should focus on how people can feel better and more empowered by changing their behaviour. Moreover, cognitive policy approaches need to be complemented by those subconscious ‘nudging’ cues that are reinforced through our environment in order to be truly effective.

However, this has to be about more than just a few cute nudges, as clearly this will not be enough to help severely troubled families and drive long-term systemic change. And how to answer the charge that behavioural techniques are too small scale, too transactional and too open to manipulation? Who is to decide what is good behaviour? Should public authority be used to influence private behaviour, or this indicative of excessive state interference? A counter-argument may point out that certain behaviours impose costs not just to the individual but also to wider society – be they, for example, costs associated with crime and violence from drug and alcohol abuse, or costs to the NHS of dealing with medical complications attached to poor health – and that the use of public authority is legitimate in this context.

A more difficult charge to answer is articulated by Peter Wilby who has suggested that nudge’s rationale stems from a mistaken belief that ‘if people act against their own best interests – by using drugs, eating junk, failing to save or taking loans they can’t repay – it is because of individual behavioural flaws, not because of poverty, inequality or lack of hope’.

As such, system redesign must be about also changing the behaviour of government staff: their view of their role, their impact and their relationship with the people they are trying to help. The pull of the old system remains strong; risk aversion, fear of postcode lotteries, silo based services, centrist bias and a limited range of tools all make government poorly designed to engage genuinely and effectively in innovative practices. The localism and devolution programme is also difficult to reconcile with the idea of scaling up, testing and sharing new innovations and services designs. The question that will present itself is whether the government will accept liberation in the system if it is accompanied by widespread ambiguity and risk.

Moreover, there needs to be greater consideration and consultation on public tolerance for nudging and government driven behavioural change. Interventionist policies may promise beneficial outcomes but they provoke fears of a violation of personal integrity and privacy that will only be assuaged if notable efforts are made to build a broad support base – including the private sector – and draw the public in to the decision making process.

The problem with this approach is that corporations and businesses are not going to risk their private profits for the public good and in many cases their interests may be diametrically opposed to the government’s health agenda. The National Federation of Retail Newsagents was recently accused by its ex-leader of being funded by and lobbying on behalf of the tobacco industry in fighting potential bans to behind-the-counter displays of cigarettes. In such cases a focus on nudging may crowd out more promising initiatives that require legislation in order to assure compliance.

A more promising approach might include insights from ‘Think’ – a concept developed by Professors Peter John from the University of Manchester and Gerry Stoker from the University of Southampton. Think draws on a different tradition to nudge in that it argues that it is possible to get citizens to think through controversial issues in innovative ways that allows for evidence and the opinions of all to count. This could be used to identify and refine those social norms and behaviours that are to be promoted.

Research into ‘Think’ found that large-scale online deliberations can be engaging for significant numbers of citizens and controversial topics can be discussed, but those that do participate tend to be already politically-interested. However it may be possible to use this route to get new voices into public debate if public sector organisations use innovative methods. Think approaches more generally require different ways of working by public sector bodies and could create a valuable entry point for proposals that seek to push behaviour change in public policy.