Rocco Friebel, Laia Maynou, and Katelyn Yoo estimate the impact of social sector spending cuts resulting from austerity measures on opioid-related hospitalisations and mortality in England. They call for more and targeted spending on the social sector, policies that address systematic inequalities, and improved macroeconomic conditions that are critical in curtailing the opioid epidemic.

Opioid abuse and addiction have become a public health concern and a significant cause of overdose-related fatalities. While perhaps the United States is synonymous for the opioid epidemic – with an average daily death toll of 130 people that has destroyed entire generations and left communities shattered – other countries have also seen dramatic increases in opioid-related mortality and morbidity, including England. Between 2011 and 2016, opioid-related deaths have risen by more than 68%, to 41 deaths per million population, and more than 40,000 patients are admitted to English hospitals because of an opioid overdose every year.

What causes the opioid epidemic?

Opioids are an important building block in the management of acute pain and cancer pain, and they support dignified end of life care. However, their prolonged use can be risky. Buildup tolerance ultimately requires higher dosages and increases the risk of addiction. Despite these shortcomings, prescription rates of opioids for non-cancer pain in England have skyrocketed between 2006 and 2017, in some instances up to 30-fold, with prescription volumes for the most used opiates approaching 2,500 prescriptions per 10,000 population. Even more shockingly, 1 in 6 prescription receptions have been found to become long-term opioid users within one year of initiation.

So, what is it that has impacted the demand of opioids to increase in the last decade? Much research has focused on disentangling the root causes of the opioid epidemic, aiming to develop tangible recommendations to inform regulatory action. While there are factors such as pharmaceutical industry-induced demand, poor knowledge, and overprescribing by medical professionals, and a growing illicit drug market, several important studies in the economic literature have identified a country’s macro-economic performance as a key driver of opioid consumption. In other words, more people consume opioids, whether obtained via a prescription or illegally, when levels of unemployment rise – a clear example of deaths of despair.

Can it be that psychological pressures that arise due to loss of employment, and its correlates such as reduced income, manifest themselves in physical pain and discomfort that pushes people into a cycle of medication and hopelessness? If that is the case, do governments have a responsibility to provide a safety-net that can protect from adverse effects of unemployment?

Our study takes advantage of the 2010 Conservative-led austerity program that was introduced to address concerns over rising levels of sovereign debt in the United Kingdom. Spending cuts of up to 50% were enforced on some local authorities, which had profound effects on the financing of welfare services, including social care and housing assistance. Perversely, the welfare state was slimmed based on ideology at a time when unemployment rose in the aftermath of the financial crisis, leaving people hanging without sufficient support, enhancing unnecessary suffering for many.

By using the variation in spending cuts across different local authorities in England, and across different expenditure items (i.e., social care, housing, etc.), we were able to estimate the impact austerity had on opioid abuse in England and provide evidence on the factors underlying the previously established countercyclical relationship with macroeconomic performance. We studied two important outcomes: mortality and hospitalisations; the latter highlighting possible spill-over effects of government spending reductions into the health care budget that was ‘ring-fenced’ from austerity cuts.

Impact of austerity on opioid abuse

Like work from the US, we find that opioid mortality and hospitalisations increased in line with a rise in unemployment. A 10% increase in unemployment was associated with seven opioid-related deaths and 62 hospitalisations. When we introduced variation in spending, the findings were compelling. It appears that deaths and hospitalisations were concentrated in the southeast, east, and northwest of England, all areas that had seen the most significant spending cuts between 2010 and 2017 (see figures 1 & 2). Our modelling showed that impacts were particularly large for reductions in social care and housing assistance, and we show that targeted spending for welfare programs can have mediating effects at times when unemployment rates rise. 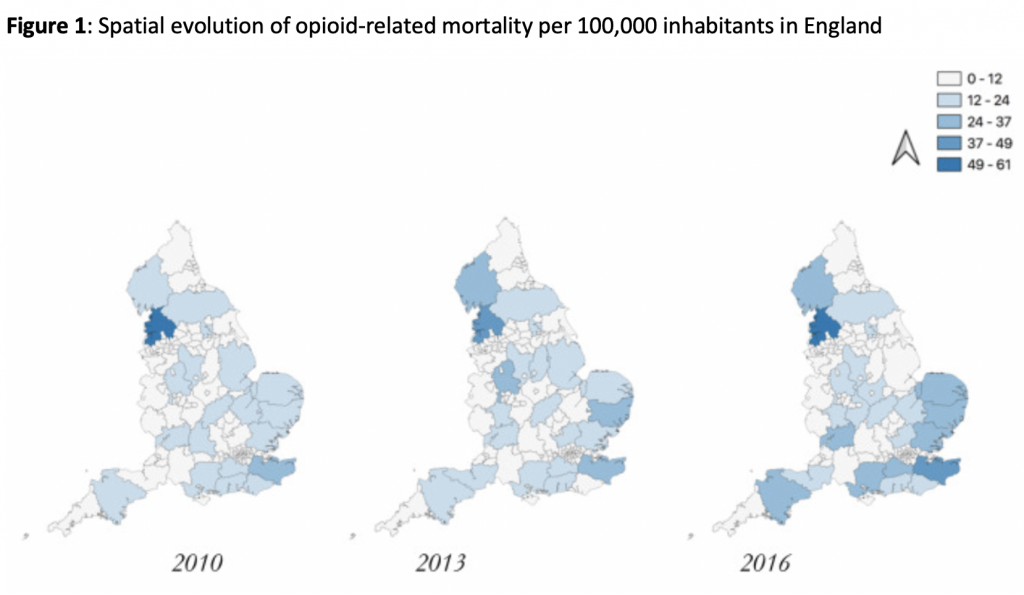 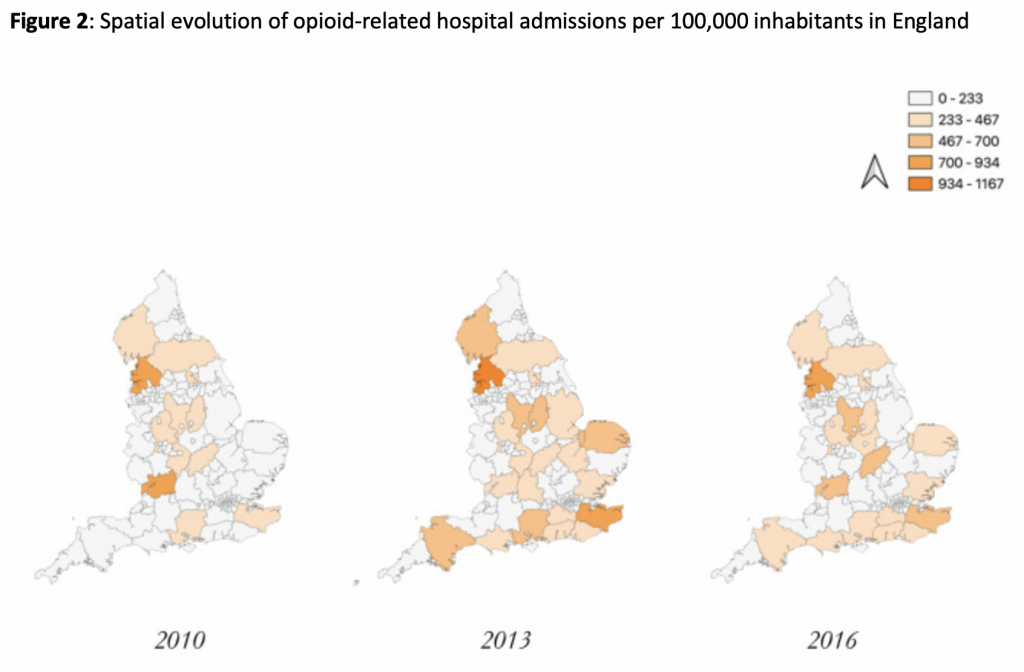 Our research highlights the important role the welfare state plays in protecting societies from social-risk effects. The last decade of austerity has shown us the havoc fiscal consolidation has on societies. As poverty grew, homelessness soared, inequalities entrenched, and suicides and mental health issues mounted, it has become ever clearer that austerity is not the path that encourages economic recovery. Instead, it is important for governments to acknowledge that focused and targeted spending on welfare, policies that address systematic inequalities, and improved macroeconomic conditions pay a dividend in form of improved population health. This will lead to a healthier and more productive workforce, subsequently aiding economic recovery.

Ultimately, it is the duty of governments to consider the wider impact of their fiscal policies, ensuring not only economic recovery but protecting the poor and vulnerable. This duty should be called into memory of current decision-makers, who are faced by a perfect storm of social and economic uncertainty resulting from Brexit and the COVID-19 pandemic. Unemployment rates are on the rise, and government debt as a share of GDP has increased to levels beyond those seen during the last financial crises. The model of austerity on the back social support is obsolete. Societies should demand a strong and reliable welfare state, which ultimately will benefit everybody.

Photo by Hal Gatewood on Unsplash.