The 2010 general election was notable in multiple respects, and will be recorded by history as the election which saw Britain’s first post-war coalition government. Yet, perhaps just as notable is the breaking of the record for the vote won by ‘other’ parties outside the big three of Labour, Conservatives and Liberal Democrats. In this post, Chris Terry argues that this fragmentation of the party system is incompatible with the UK’s first-past-the-post electoral system.

UKIP now regularly poll in third place and have won their place in the House of Commons with two parliamentary by-elections. The SNP have seen strong growth since the Scottish referendum. Based on current polling, the website Election Forecast predicts the SNP will win between 21 and 44 seats in May, with 32 most likely, enough to make them the third largest party in the Westminster parliament. The Greens, too, have seen growth. Now regularly polling level with the Lib Dems they are experiencing a rapid growth in membership.

Party fragmentation is an international phenomenon, which affects almost all advanced democracies (perhaps the only exceptions are Malta and the US). In the UK it has been a phenomenon which has been ongoing since the 1950s. Between the 1951 and 2010 elections the percentage of voters voting for the main two parties went from 96.8% to 65.1%.

As we enter the next election we see the emergence of a party system which is more fragmented. Yet, this fragmentation is incompatible with our electoral system which is supposed to provide two party politics.

At such low shares and close results an element of chance enters the race as a stray last-minute ballot box decision here, or a small mistake by a Get Out The Vote campaign there can change the winner.

For the beleaguered voter tactical voting becomes more difficult too. In such a splintered race how is a voter supposed to know who to vote for to keep out their least preferred option, especially when all parties will describe themselves as such. That voters feel that they must vote tactically is a true shame already, to wake up on May 8th to find they have tactically voted for the wrong candidate only to have let in the candidate they least wanted.

At a national level we may well see results with almost no resemblance between seats and votes. FPTP rewards parties with votes concentrated into a small number of voters, such as those in one nation, such as the SNP or DUP and those who’ve learned to target their vote into a smaller number of constituencies like the Liberal Democrats. So we could see the spectacle of the SNP as the third largest parliamentary party with the sixth largest number of votes. The DUP winning more seats than the Greens or UKIP on a fractional vote share and UKIP winning the third largest number of votes but being able to break out of single digits in seats.

Coalition government can be a good thing, but they must reflect the will of the electorate who must be able to appropriately reward and punish both big and small parties for their performance.

So we head into an election where FPTP looks certain to fail on its own terms. Its defenders argue that it produces a two party system and, with it, supposedly stronger and more stable one party governance. That is no longer true. A single party government is still possible, though we should question the legitimacy of a government elected by only 35% of the population as in 2005, but with time hung parliaments are likely to become more frequent. In this sense, FPTP fails on its own terms, failing to deliver what its supporters claim it will.

Yet, at the same time, FPTP fails to produce the kind of legitimacy and basic fairness seen in elections in countries used to coalition. This mismatch between Britain’s party system and its electoral system can only combine to undermine the legitimacy of British politics and to cause serious governing issues. The two do not go together and one must shift to accommodate the other. It tends to be easier to change institutions, than to change voters. 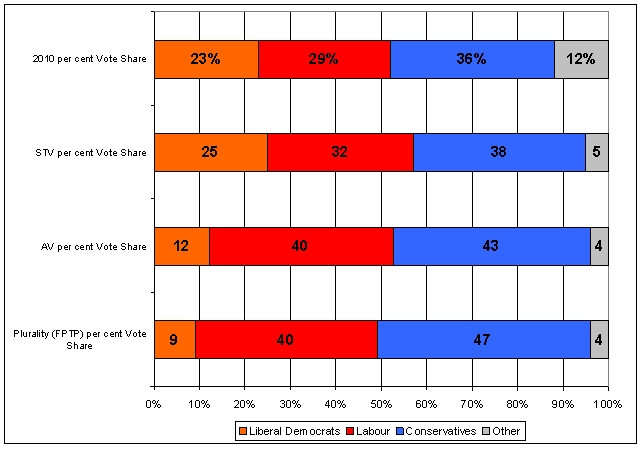