On 4 January, and two days prior to his arrest for assault, former leader of the English Defence League (EDL) Tommy Robinson, launched – for the third time – the British branch of the German movement “Patriotic Europeans Against the Islamisation of the Occident” (Pegida). William Allchorn writes that the group’s rhetoric is almost identical to that of the EDL, while the movement seems to have no independent message to that of Pegida Germany. He argues these two characteristics mean this third attempt will very likely be another failed one.

Earlier this month, three key figures from the UK ‘anti-Islamisation’ scene assembled in a rural Bedfordshire pub for a press conference. Tommy Robinson, former leader of the EDL, convened the meeting in order to announce the creation of a new leadership team for the UK chapter of Pegida, the pan-European anti-Islam, anti-refugee movement ‘Patriotic Europeans Against the Islamisation of the West’. At the 4 January press conference, Paul Weston, leader of Liberty GB, and Ann-Marie Waters, former UKIP Parliamentary candidate and editor of ‘Sharia Watch’, were announced as leader and deputy leader of the fledgling protest movement. February 6 is the date set for their first Birmingham demonstration of 2016.

Pegida UK has had a tumultuous start, going through three iterations over the past year. The first came in January 2015 with the creation of the movement’s promotional Facebook page, ‘Patriot Voice’. This formed the basis for organising a number of (albeit small) rallies in the first part of 2015. In the first of these in February 2015, 400 protestors aligned with the group and demonstrated in Newcastle-on-Tyne at what they saw as ‘the Islamisation of Europe’. But this ‘inaugural’ saw the group largely outnumbered – with 600 counter-protestors turning out to rally against the event. The second protest occurred just over a month later at Whitehall. The nascent movement could only muster 100 protestors in a rally intended to ‘raise awareness of the detrimental affect [sic] radical Islam’. It was after this that the group appeared to fizzle out – with no subsequent protests planned on its Facebook page.

The new movement looked dead and buried, until the revival of the group in December 2015. It was at this time that Tommy Robinson told the media that he would be helping to ‘advise’ and re-launch Pegida UK in the New Year. To those following Robinson’s activities on Twitter and in the mass media, this was not a great surprise. Robinson has been in talks with the leader of Pegida Germany, Lutz Bachman, since the autumn of 2015 and has attended and talked at demonstrations in Dresden and Utrecht. He did this with the express interest of scheduling similar anti-refugee, anti-Islam demonstrations across Europe.

Poor fortune, however, hit the group yet again. Shortly after talking to the media, Robinson installed a former British soldier and anti-ISIS mercenary, Tim Scott, as the movement’s new leader. Under heavy questioning and in what became a car crash interview with Channel 4 News, Scott failed to outline what the movement stood for and the nature of its grievances. Scrambling for answers to the interviewer’s questions, Scott vaguely gestured at ‘all stuff to do with [radical Islam]’ and drew tenuous links between the situation in Iraq and the UK. Unsurprisingly, Scott resigned shortly afterwards.

A new, sanitised version of the EDL?

The New Year saw yet another ‘new start’ for the movement and a third iteration after a number of false starts – with news that Paul Weston, chairman of the anti-Islam party Liberty GB, would become the group’s new leader. Clearly drawing from his pre-Christmas experience, Robinson drew in more politically and media savvy members of the UK’s anti-Muslim scene to front the re-launch. In what looked like a particularly tense interaction between journalists and the new leadership team, Robinson arranged a press conference to announce the new team and the group’s planned protest in Birmingham in February.

Unsurprisingly, the key question remains: to what extent is Pegida UK a different type of protest movement to the EDL? At the press conference, Robinson was keen to stress that – in style at least – Pegida UK is designed as a ‘step away’ from the violent, balaclava-wearing and alcohol fuelled events that were typical of the EDL demonstrations. Pegida UK demonstrations, he suggested, would be a ‘safe environment’ for ‘families and ordinary people’ to voice their concerns over immigration, Islam and the feeling that they ‘were not being heard.’ So Pegida UK, is seen by Robinson as a fresh, mature break from the chaotic and disorderly scenes of the EDL – stressing that the Birmingham event would be in a car park and ‘isolated.’

Yet the substance of this change rubs away when you look more closely at the grievances of the group. In an interview with The Independent in December, for example, Robinson explicitly stated that the group would campaign for a ‘moratorium on Muslim immigration to the UK, as well as place a ban on the building of mosques.’ Such policies are almost identical to those advocated when Robinson was leader of the EDL. Moreover, the background anti-Muslim ideology and conspiracy theories remain the same, such as accusations that the UK government is ‘in the pockets of the Saudi petrol dollar’ and that Islam is not just a religion but a ‘political ideology’.

A second related point is the extent to which Pegida UK will be an independent branch of Pegida Germany. At the moment, it seems that the group is locked into the same cycle of protests and appeals to ‘ordinary people’ its German counterparts pioneered when setting up the movement in December 2014. The extent to which this hampers and stifles autonomous operations by Pegida UK will be interesting to track. Without a distinct message for the UK public and its own mode of activities, the re-launched movement might not last long, while the already top-down nature of organisation adopted by the newly re-launched Pegida UK will be interesting to watch. Research suggests that what made the EDL originally so successful was the ‘buzz’ that it gave to those participating and the slightly chaotic nature of such demonstrations. Will a more sedate and sanitised version of these demonstrations be able to sustain a loyal following? Going on the tumultuous first year that the group has already had – and with Tommy Robinson having been arrested on prior charges of battery two days after the group’s ‘new start’ – it increasingly looks like this third iteration will not be too long-lived.

William Allchorn is a Doctoral candidate at the University of Leeds, researching political responses to the English Defence League. William’s research interests include UK politics and the far right. He tweets as @willallchorn. 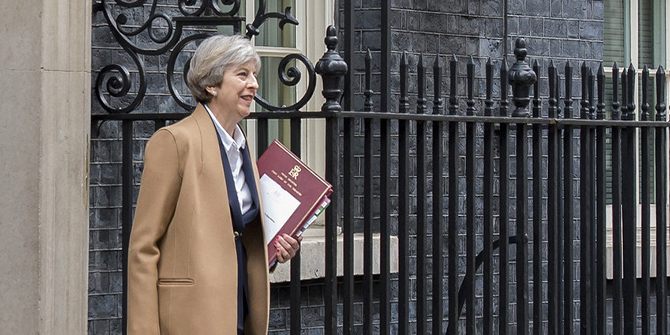