With an ageing population, the question of how we will pay for our retirement is a pressing one. Using new survey data, James Lloyd of the Strategic Society Centre finds that just over half of the workforce is saving a pension, and that employer contributions are by far the largest influence on pension savings. Policy makers should focus on this ‘policy lever’ if they wish to increase the amount that we save.

The question of how to encourage individuals into pension saving remains one of the biggest policy challenges of our time. The availability of data from the first wave of the Wealth Assets Survey (WAS) provided a new opportunity to explore what individual, household and employment factors are associated with pension saving. Even by the standards of longitudinal social surveys, the sample in WAS is large: around 55,000 individuals.

We focused on the 25,995 individuals in the survey who are employed and who could therefore be expected to save into an occupational or personal pension. We first mapped the prevalence of pension saving across the population, breaking the sample down by gender, age, education, job-type, size of employer, and so forth.

We found that around 55% of the workforce saves into a pension, 48% into an employer pension scheme, 5% into a personal pension, and 2% into both types. Participation is broadly similar across the genders. Pension savers are on average older, in couples, of white ethnicity, highly educated with relatively high earnings and own their own home. Interestingly, within couples, partners typically adopt a similar position on pension saving, suggesting that few couples make active decisions for one to save rather than the other.

The real value of WAS in this regard was being able to map the population of both occupational and personal pension savers, and in so much detail. Few data sources are able to provide such rich information. But the availability of such data also pointed the way to the second part of our research: a regression analysis of factors influencing participation in pension saving.

We wanted to do this because the precise drivers of pension saving are a heated topic of debate among policymakers and the pension industry. It was also a way of helping policymakers identify which ‘levers’ would provide the most ‘bang for the buck’ if they are targeted by public policy.

Pension saving decisions will clearly be influenced by household finances. Unsurprisingly, level of earnings is positively correlated with pension saving, although the effect diminishes beyond a relatively low level. A similar effect is found for liquid savings. Although individuals might build up liquid savings as a ‘buffer’ against unforeseen events and subsequently feel more comfortable with ‘locking away’ their money in a pension until retirement, beyond a surprisingly low level – around £2500 – a person’s level of savings has little influence on participation in pension saving.

But the real headline finding for the whole research was the role of employer contributions, as Figure 1 shows. After controlling for the effect of age, gender, earnings, financial attitudes, tenure and education, the availability of employer contributions for occupational pension schemes increases the chance that someone will save into a pension by 71 percentage points. We should caution that this remarkably strong effect almost certainly captures unobserved factors such as the extent to which employers ‘sell’ their occupational pension scheme.

Figure 1: Factors affecting whether people save into an occupational pension, if eligible 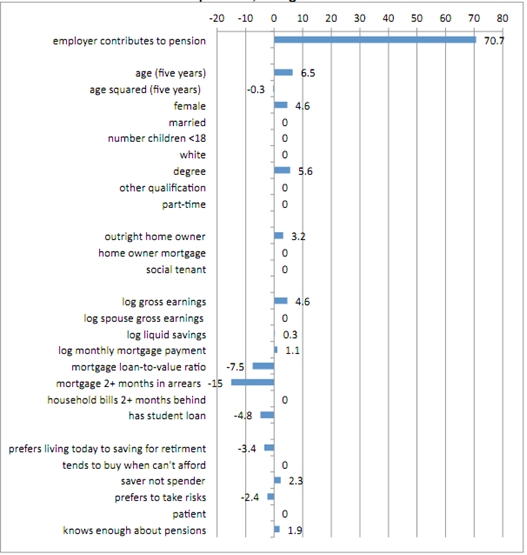 But even taking account of such factors, this remains a remarkably strong effect. Indeed, someone could have multiple negative characteristics for participating in a pension – being male, having a student loan, being behind with their mortgage – and still be more likely than not to save into an occupational pension if the offer of employer contributions is available.

So what do these findings mean for policymakers? First, it is clear that as a potential policy lever, employer contributions are by far the biggest influence on pension saving that policymakers can target through policy. There is simply no other ‘policy lever’ available that is anywhere near as powerful.

Second, and more topically, these findings suggest that the government’s pension reforms, due to come on-stream on October 1st 2012, are indeed likely to result in higher rates of pension saving. The reforms will see all organisations with more than 50 workers compelled to offer an occupational pension scheme, automatically enrol their employees into it, and to offer employer contributions as a ‘match’ to employee contributions.

The government recently decided to postpone even further a similar duty that was due to be phased in for smaller employers. Our research suggests there can be no doubt that pension saving among employees of these firms will inevitably be lower as a result. By highlighting the most effective levers for policymakers to encourage individuals into pension saving, this research also highlights the cost of not making the most of these levers.

Download Who Saves for Retirement? from the Strategic Society Centre.

This article describes a joint project by the Strategic Society Centre and the Institute for Social and Economic Research (ISER) at the University of Essex, made possible by the support of Prudential.