Brian Reading outlines here why the coalition government’s fiscal consolidation plan is in trouble. He goes on to note the shortcomings of the government’s promises around the deficit reductions and the harsh truths he feels underlie these promises.

In its first two years, the coalition government succeeded in beating its spending target. Yet its fiscal consolidation Plan A failed. In the June 2010 emergency budget the Coalition announced plans to limit the rise in public spending to £30½ billion between financial years 2009-10 and 2011-12, with current spending up £50½ billion and capital spending down £20 billion.

In this event, current spending went up less and capital spending went down more. The budget was under-spent by £5 billion. Yet George Osborne’s mandated cut in the cyclically adjusted current budget deficit was missed by half. It was supposed to be reduced by over two per cent points to 5½ per of nominal GDP cent. It fell by less than one per cent point.

Why? Growth, or rather lack of it. Larry Elliott, commenting on my Lombard Street Research report ‘The Blunt Axe’ (Guardian, 24th September), summed it up succinctly, “a deficit reduction plan without a growth plan is no deficit reduction plan at all.” Real GDP is barely higher than it was when the Coalition took office. It was forecast to increase by five per cent. GDP was over-estimated and consequently tax revenue disappointed.

On 5 December the Chancellor will reveal his autumn pre-budget, and the Office for Budgetary Responsibility (OBR) its latest forecasts. This year’s deficit could be bigger than last years. The 12-month moving total current deficit is nudging the level inherited from Labour. Twice a year the OBR judges whether the government is on track to meet its fiscal mandates. These are to balance the cyclically adjusted current budget five years hence (rolled forward each year) and start bring down the net debt/GDP ratio in 2015-16. The OBR has awarded pass marks in all five of its forecasts to date – grade inflation is not confined to education. 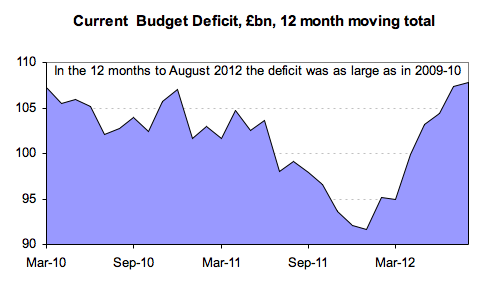 In December the OBR must declare the falling debt target will be missed. It should fail both mandates, but it could still pass the rolling budget target. (If that target had been fixed it would be missed by a mile.) The OBR’s medium-term projections are biased in the government’s favour. It uses a dynamic stochastic general equilibrium model which assumes the GDP level reverts to trend at the forecast horizon. Lost growth now is thus corrected by faster growth later, unless long term trend growth is assumed to have weakened — a knowable unknown.

Plan A’s macro-economic consequences are much debated. My report did not question what the Government set out to do, but whether it went about it in the right way. “The Blunt Axe“ analysed the flaws in the government’s 2010 Spending Review decisions that did needless and grievous damage to the economy. It was written in the hope that a Plan B will get it right next time.

Correcting an unprecedented deficit required unprecedentedly deep and protracted cuts. Pain was inescapable. But the gulf between rhetoric and reality has rarely been wider. Take the following promises and underlying realities: 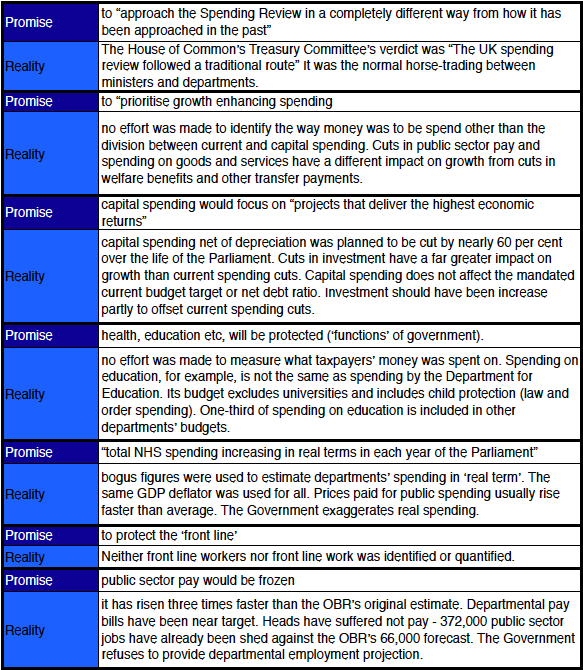 Public spending controls are designed to show which ministers are accountable to Parliament for spending how much. They do not reveal what the money is spent on or how it is spent. After the event the Office for National Statistics (ONS) analyses departmental spending to show its economic consequences. But it makes limited efforts to measure real changes, value for money. A meaningful spending review would start from where and how money is to be spent. Employment projections would be de rigueur, together with detailed price projections.

Author’s Note: ‘The Blunt Axe’ was a sequel to Lombard Street Research’s pre-election report ‘Sharpening the Axe’. We advocated then the appointment of an independent ‘Geddes’ style commission to recommend cuts that would do the least damage. We do so again now.