Growing numbers of university students in Britain and the United States are staying on after their first degrees to invest in a postgraduate qualification. Joanne Lindley and Stephen Machin find that workplace technological changes, such as increasing computer use, has driven rises in the demand for workers with postgraduate qualifications, leading to widening wage inequalities among graduates and across the labour force as a whole.

Mass participation in higher education has altered the typical path followed by university graduates. The norm used to be that after obtaining an undergraduate degree; people would finish their studies and enter the labour market. These days, many more students stay on to invest in postgraduate education. Indeed, by 2009 just over 10% of the workforce in Britain and theUnited States– and more than a third of all graduates – had a postgraduate qualification.

We have documented these trends in postgraduate education and how they relate to rising wage inequality in the two countries. It is now widely understood that despite rapidly growing numbers of university-educated workers, increased relative demand for their skills has been a key driver of overall wage inequality. Our research reveals that the changing composition of the graduate labour force – and widening wage differentials within this group – has also been a key feature of rising inequality.

Figure 1 shows changes in the proportions of all graduates and postgraduates in the labour force during the past 30 years, as well as the changing share of postgraduates among all graduates. In theUnited States, the graduate share of employment has increased steadily, rising from 24% in 1980 to 36% in 2009. InBritain, the graduate share doubled between 1996 and 2009, going from 14.5% to 29%.

Figure 1: Employment shares of all graduates and postgraduates 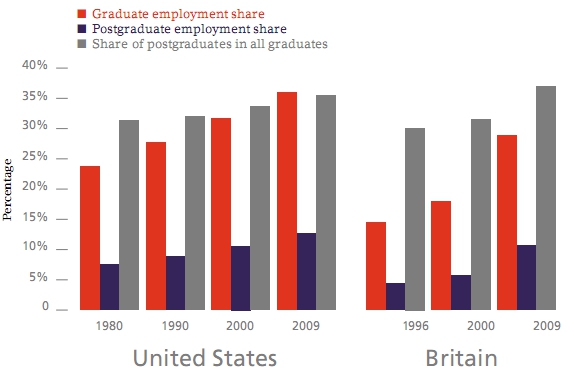 Source: US Current Population Surveys and Labour Force Surveys in Britain – employment shares are defined for people in work with 0-39 years of potential  experience and aged 26-60.

At the same time as postgraduates increased their employment share, their relative wages also rose. Figure 2 shows how the wage differential between those with a postgraduate qualification and those with just an undergraduate degree has increased through time. 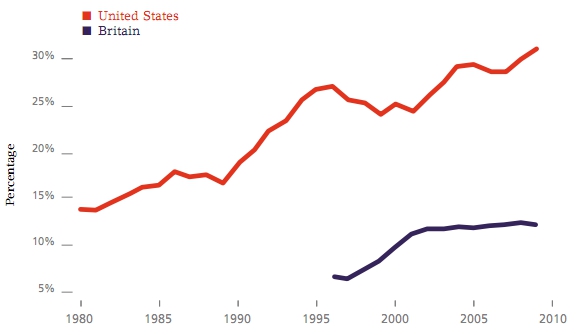 It is evident that postgraduates have significantly strengthened their relative wage position in both countries. In the United States, the postgraduate/college- only wage differential has risen sharply over time, more than doubling from around 14% in 1980 to just over 30% by 2009. In Britain, the postgraduate/ college-only gap is lower but it has risen from 6% in 1996 to 13% by 2009.

Previous research has connected the relative demand shifts for different education groups that have underpinned increased wage inequality to measures of technological change. The usual approach is to relate the two in terms of changes across industries through time. We have found that that measures of technology – such as R&D, innovation, computer usage and investment in computers – have been strongly correlated with the increased demand for more educated workers.

More evidence that employers are increasingly demanding postgraduates can be seen by comparing the skill sets required by the jobs of postgraduate and college-only workers. Table 1 shows postgraduate/college-only differences in their estimates of cognitive skills, problem- solving skills, people skills, firm-specific skills, the tasks they use computers for and how routine their jobs are.

Table 1: Skills and job tasks suggesting that postgraduates in Britain are more in demand than college-only graduates 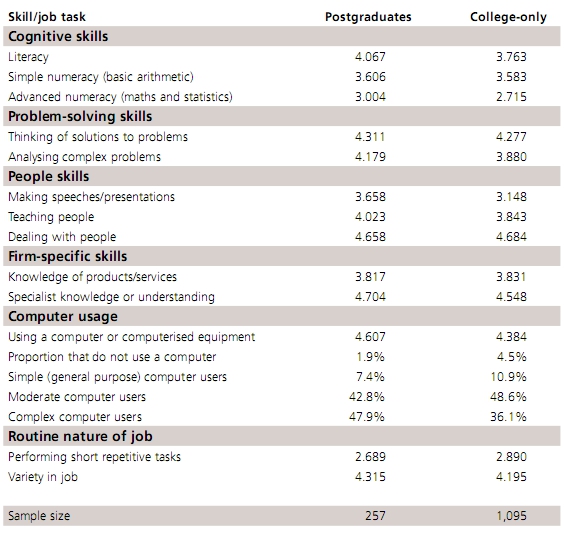 Source: The 2006 Skills Survey. With the exception of the proportions using computers, the numbers are based on a scale of 1-5 for questions on task performance – ‘How important is this task in performing your current job?’ – for which the choices are 1 ‘not at all important’,2 ‘not very important’,3 ‘fairly important’,4 ‘very important’ or 5 ‘essential’.

It is clear that both sets of graduates do jobs with high skill and job task requirements. But in key skills areas, the levels are significantly higher for postgraduates. For example, postgraduates have higher numeracy levels (especially advanced numeracy), higher levels of analyzing complex problems and more specialist knowledge or understanding.

Breakdowns of computer usage are also striking. Postgraduate and college-only workers both report high levels of computer usage, but using computers to perform complex tasks is markedly higher among the postgraduate group. So it seems that postgraduates possess different skills and do jobs involving different (usually more complex) tasks than college-only workers. This is in line with the finding that relative demand has shifted faster in favour of the postgraduate group, and it appears to be an important aspect of rising wage inequality among college graduates. 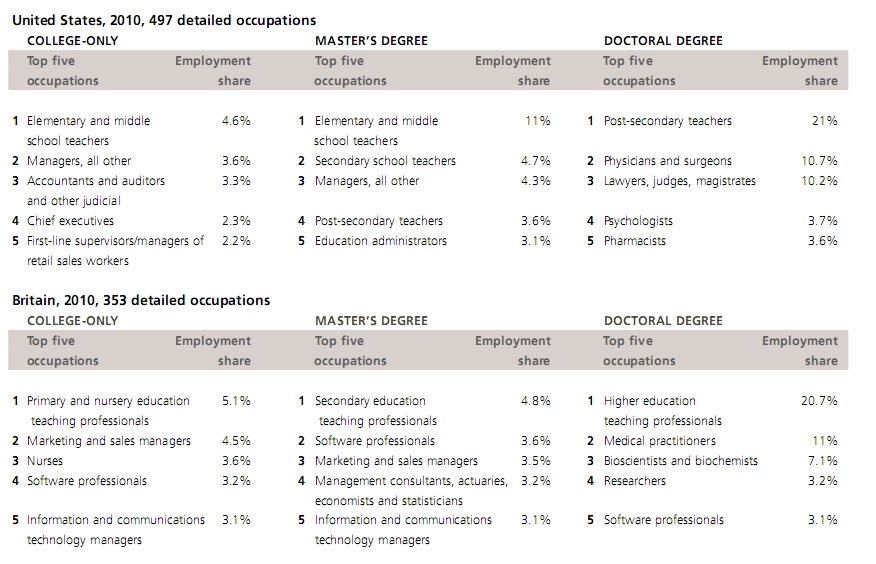 Overall, our findings on increasing divergences within the group of workers who go to university offer new evidence on how the changing education structure of the workforce has contributed to rising inequality. There have been significant increases in the number of workers with a postgraduate qualification, and at the same time as this increase in their relative supply, their relative wages have risen strongly compared with workers with only a college degree. Trend increases in the relative demand for postgraduates have acted as a key driver of increasing within-graduate inequality and of overall rises in inequality.

The full version of this article first featured in the Autumn 2011 edition of CentrePiece magazine, which is now online.

Professor Stephen Machin – LSE Centre for Economic Performance
Stephen Machin is Professor of Economics at University College London and Research Director of the Centre for Economic Performance at the London School of Economics. He is one of the Editors of the Economic Journal. Previously he has been visiting Professor atHarvardUniversity (1993/4) and at the Massachusetts Institute of Technology (2001/2). He is an elected fellow of theBritishAcademy (since 2006), President of the European Association of Labour Economists (from 2008) and is an independent member of the Low Pay Commission (since 2007). 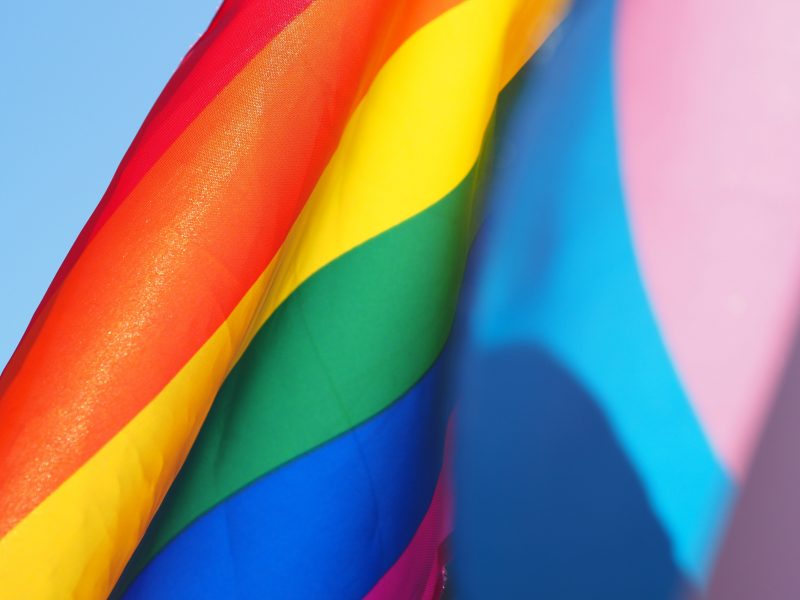 Homelessness is rising as benefits are cut