Policy makers appear to be recognising that the lack of representativeness of both Parliament and the civil service is a problem. A better mix of backgrounds may also help the public rebuild some trust in political institutions. Mathew Flinders, Felicity Matthews and Christina Eason discuss recent research looking reasons behind the continued traditional make-up of public appointments.

Academic attention regarding diversity and issues of representation has burgeoned in recent decades. However, this literature has concentrated almost exclusively on elected political institutions; and despite the growth of the unelected equivalents, knowledge regarding the composition of public boards is limited. In June 1998, the Labour Government pledged to achieve a ‘50:50 ratio of women and men for public appointments and a pro rata representation of members of the ethnic minorities.’ Yet just four years later the Commissioner for Public Appointments Dame Rennie Fritchie bemoaned the fact that the composition of boards remained ‘male, pale and stale’; and official statistics suggest that this complaint remains relevant today.

So, why did the Labour Government fail to increase social diversity on public body boards, despite its 1998 target pledges? To answer this question, we undertook a large series of interviews with past and present ministers, MPs, appointees, recruitment consultants and Appointments Commission staff between 2008 and 2011, which shed light upon the main structural, cultural and institutional barriers.

We found that despite appointed quangos having an increasing range of policy responsibilities, there is a lack of basic public knowledge about the opportunities offered by public appointments, how decisions are made and how to apply. Some organisations have actively attempted to publicise opportunities. These include recent projects by the Appointments Commission (notably their ‘Ladder of Participation’ project), the Government and Equalities Office (the recruitment of 180 Public Appointments Ambassadors), the Commissioner for Public Appointments (like the ‘Targeting Talent’ and mentoring initiatives), the WNC (networking breakfasts and regional workshops) and the ‘Get on Board’ project run by Belfast Metropolitan College. Yet, despite such initiatives, negative perceptions of public appointees remain; and negative portrayals of public appointees in the UK as parasitical ‘fat cats’, being paid too much money for too little work, deterred potential appointees from putting themselves forward.

In reality less than 5 per cent of ministerial appointees receive any payment, and even when a ministerial appointment is remunerated (usually only in relation to chair appointments to large executive bodies) salaries are low compared to the private sector. As the head of the Civil Service, Sir Gus O’Donnell, noted, most public appointments are taken on a pro bono basis as a contribution to the general public good, and there is a general rule that senior salaried appointments involve ‘part-time pay, full-time work’. Our research also suggested that time constraints prevented many people from serving on a public board; and that time and remuneration factors may have gendered implications, which could explain why fewer women hold a public appointment. Finally, the demographic profile of certain professions, compounded by a risk-adverse approach to making appointments has also impeded the diversity of boards. Many sectors are disproportionately dominated by ‘white blokes with beards’; and civil servants have often applied a very narrow understanding of ‘relevant experience’, equating it with ‘prior board level experience.’

Our research also revealed that certain aspects of the appointments process itself also impeded diversity. It was widely suggested, for example, that advertising strategies often lacked creativity and failed to reach out to under-represented social groups. Selection panels were perceived as ‘sticking to type’ and recommending individuals who ‘cloned’ existing board members. This may explain the high prevalence of recycling that tends to occur within the appointments process. During 2009-2010, for example, 45 per cent of all ministerial appointments were re-appointments and some individuals hold as many as three or four public appointments concurrently. Finally, many suggested that formalised pre-appointment hearings in front of select committees for a range of specific posts, may have an unintended consequence of narrowing the diversity of applicants, as only individuals with experience of Whitehall and Westminster would feel confident in applying where a pre-appointment hearing was likely.

Overall, we can see that diversity has been impeded by broad societal issues such as deficient knowledge and awareness of opportunities, and the under-representation of some social groups in some areas of professional life; and some aspects of the public appointments process have served to entrench narrow ideas of who could take on a public appointment, whilst other aspects such as increased parliamentary involvement have acted as a deterrent. A key challenge is therefore to build upon the incremental improvements in the diversity of public appointments that have been achieved to date.

The Coalition Government has an ‘aspiration’ for women to comprise half of all new appointments to public boards by the end of this parliament, although it has failed to set targets for other diversity strands such as ethnicity and disability. Nonetheless, as the Coalition seeks to re-engage and empower local communities under the banner of the ‘Big Society’, public appointments can act as a critical tool in drawing in and giving a voice to previously disenfranchised social groups, and represent a pertinent opportunity to move power away from Whitehall into the hands of the public.

This post draws upon the themes and ideas discussed in ‘Are Public Bodies Still ‘Male, Pale and Stale’? Examining Diversity in UK Public Appointments 1997–201’, which appears the latest edition of Politics. The authors would like to acknowledge the support of the Economic and Social Research Council for research grant RES-000-22-3794. 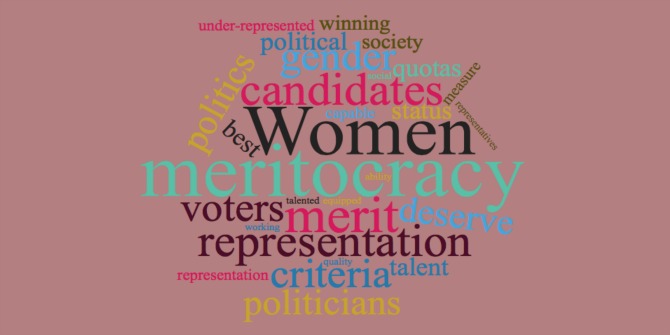