Last week Bart Cammaerts was asked by the North Belgian broadsheet newspaper De Standaard to write an opinion piece regarding the debate on race, language and political correctness in the UK (the piece was published in the printed edition of 13 May 2014). What follows is a slightly edited translation of what he wrote in which he condemns politicians, such as David Cameron and Boris Johnson, for condemning those that react against racism more than those who use racist language. He suggests this acceptance of ‘banal’ racism definitely has something to do with the growing success of UKIP.

The outcry over and subsequent defense of the mumbling of the N-word by Top Gear presenter Jeremy Clarkson, and the backlash against the dismissal of a DJ by the BBC for broadcasting a ‘golden oldie’ from 1932 which also featured the N-word needs to be situated in a much broader debate which has been simmering in the UK; namely, the greatly increased multi-cultural character of the UK and the ever more powerful political forces which resist this evolution.

There has always been a racist undercurrent in this country, think of Oswald Mosley or the long legacy of the profuse use of racist jokes by comedians such as Bernard John Manning, amongst others. What is new though is the way in which mainstream right wing political heavy weights such as PM David Cameron and the mayor of London Boris Johnson feel compelled to speak out to condemn those that condemn the use of racist language and defend political correctness. What they seem to suggest is that these are examples of ‘political correctness gone bonkers’. Johnson, who just as Clarkson never shies away from an opportunity to anger liberals and progressives, wrote in his column in the so-called Torygraph that the media-storm regarding Clarkson and the firing of the BBC radio DJ are illustrations of the fact that we are living in a [dixit] ‘Boko Haram world’. In other words, Johnson thus laments that we are living in a world where it is not possible anymore to be a blatant racist or make a racist joke.

The stand-up legend Stewart Lee once said that political correctness is:

“an often clumsy negotiation towards a kind of formal linguistic politeness and there are all sorts of problems with it, but it is better than what we had before.”

What went before was an unbridled racism expressed through language and which exhumed a white superiority feeling and which disciplined otherness; it was also, referring to the work of Hannah Arendt, an expression of everyday ‘banal’ racism. To be clear, mainstream right-wing politicians such as the prime minister or the mayor of London of course condemn racism, at least rhetorically, but what is surprising and alarming at the same time is that they seem to condemn those that react against racism more than those who use racist language.

I live almost 10 year in London and I have always thought that one of the great things about a city like London is its incredible diversity and the respect for difference, which I have always argued is much greater than in other European countries and regions on the continent. Merely 45 per cent of inhabitants of London are white and British, about 20 per cent are Asian and 15 per cent are from African or Caribbean descent. Besides this a sizable proportion of London’s inhabitants, including myself, come from other EU countries. So given all this, how did we suddenly arrive to the point that mainstream right-wing politicians think it is totally acceptable to condone the use of racist language while condemning and ridiculing those who contest the use of racist language?

For one, outside of the London metropolis and a few other major cities in the UK, the ethnic make-up of Britain is much less cosmopolitan with non-whites representing between 0 and 5 per cent of the population. Furthermore, spurred on by tabloid media such as the Sun and the Daily Mail, an overwhelming majority of British people (i.e. between 70 and 80 per cent) tend to agree with statements such as political correctness has gone too far or being a Muslim is incompatible with the British way of life. It is especially this constituency of fearful white voters that has become central to the right-wing political discourse contesting those that condemn racism.

It is impossible to deny the impact of the rise and success of UKIP in this regard. It was just a few months ago that one of UKIP’s MEPs referred to the African continent as Bong-Bongo land and their current EU campaign definitely flirts with an extreme right anti-immigration discourse coated in a sauce of ultra-nationalism. It looks like the UK will experience its own ‘black’ Tuesday on the 22nd of May (in a Belgian context, ‘black Sunday’ refers to the day when the neo-fascist and Flemish nationalist party Vlaams Blok first broke through in 1991).

It looks likely that UKIP will become the largest party with the polls projecting that UKIP might gain over 30 per cent of the popular vote at the European elections this week. If this were to happen the Tories might very well be relegated to third place, respectively after UKIP and Labour. This is leading to panic reactions and might also explain why Cameron recently called Britain a ‘Christian country’ and why he together with Johnson felt compelled to support Clarkson and to ‘whitewash’ his banal racism as an innocent joke. It was not, and banal racism of this sort, as well as that inherent to parties such as UKIP, should be utterly and unambiguously condemned by all political forces on the left as much as on the right.

Note:  This article gives the views of the author, and not the position of the British Politics and Policy blog, nor of the London School of Economics. Please read our comments policy before posting. Homepage image credit: Tony Harrison 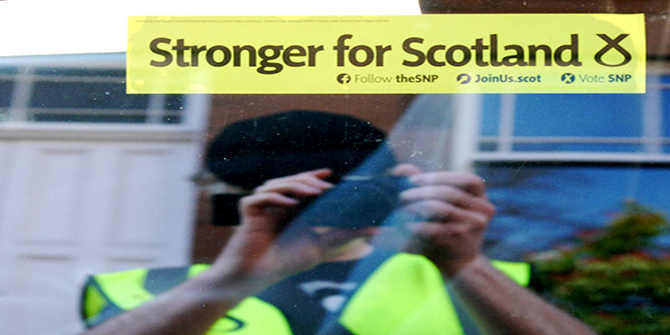 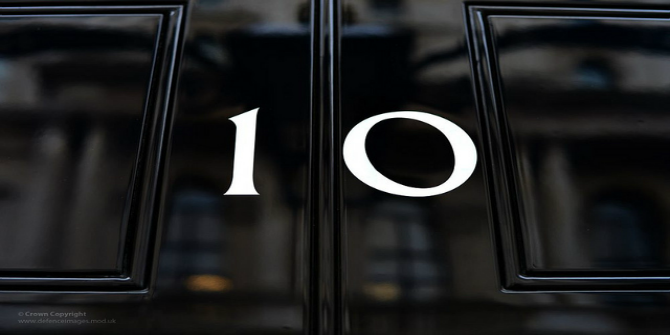 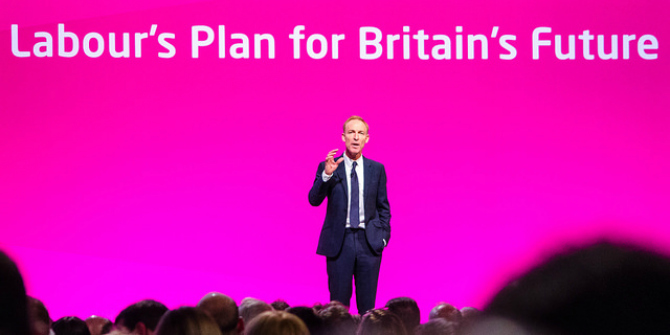