The columnist David Rose has frequently told his readers in the ‘Mail on Sunday’ that global warming ‘stopped’ almost two decades ago. Yet as Bob Ward observes, his often repeated claim has no basis in climate science and ought to be challenged.

David Rose loves to tell readers of the ‘The Mail on Sunday’ that global warming ‘stopped’ in the mid-1990s. On 5 December 2010, the newspaper published a long article by Rose, under the headline: ‘What happened to the ‘warmest year on record’: The truth is global warming has halted’. Rose’s contribution claimed “for the past 15 years, global warming has stopped”, drawing on an analysis handed to him by the Global Warming Policy Foundation, the club for climate change ‘sceptics’ that was set up by Lord Lawson in November 2009 to campaign against policies to reduce greenhouse gas emissions.

Rose was at it again on 30 October 2011, with another article for ‘The Mail on Sunday’, based on information passed to him by the Global Warming Policy Foundation, which suggested “there has been no increase in world temperatures since the end of the Nineties”.

Three months later, on 29 January 2012, Rose recycled his story in ‘The Mail on Sunday’, yet again using a hand-out from the Global Warming Policy Foundation, to assert “[t]he supposed ‘consensus’ on man-made global warming is facing an inconvenient challenge after the release of new temperature data showing the planet has not warmed for the past 15 years”.

And so fast forward to 14 October 2012, and sure enough, Rose rehashed his story in ‘The Mail on Sunday’, under the headline ‘Global Warming stopped 16 years ago, Met Office report reveals’. This ‘new’ article was apparently based on the publication of an updated version of the HadCRUT4 dataset of monthly global average temperature measurements from January 1850 to August 2012.

The HadCRUT4 dataset, the preparation of which is described in an academic paper by Colin Morice and co-authors, is considered to be more accurate than its predecessors, and includes better estimates of temperature from higher latitudes in the northern hemisphere. It shows that 12 of the 13 warmest years on record have all occurred since the end of 2000.

But the objective of Rose’s article was apparently to convince readers of ‘The Mail on Sunday’ that global warming “stopped” in the mid-1990s. So he set out not to describe what the overall HadCRUT4 dataset shows, but instead to cherry-pick a portion of it to try to give the false impression that his story was based on scientific evidence. This is how he did it.

Here is a plot of the monthly global temperature data from HadCRUT4 for the period from January 1970 to August 2012, inclusive, expressed in terms of the difference from the average value for 1961-1990. 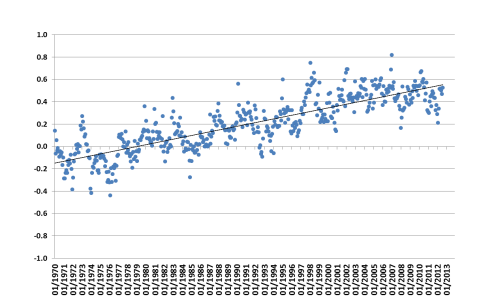 Although there is a lot of scatter, it is clear that these data define a strong warming trend of 0.164°C per decade. The variation in monthly values around the warming trend reflects the impact of natural variability and the effects of other processes that influence the global climate, such as El Niño and La Niña. It is because of this natural variability that bodies such as the Met Office and the World Meteorological Organisation recommend measuring temperature trends over periods of not less than 30 years.

But in writing his story, Rose ignored all the HadCRUT4 data from prior to January 1997, and instead only considered monthly temperature measurements from about the last 15 years. So, here is a plot of the monthly data from had HadCRUT4 for the period from January 1997 to August 2012, inclusive. 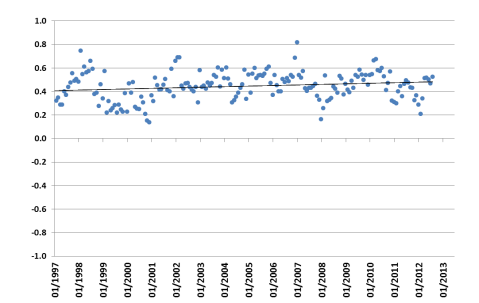 These data define a warming trend of 0.047°C per decade. Applying simple linear regression using ordinary least squares to the data shows that this trend is statistically significant at the 95 per cent level. It should be noted simple linear regression using ordinary least squares is not really the best method for assessing these data as it depends on assumptions which are violated by global temperature measurements. Nevertheless, it can be used to show that Rose’s claim that “from the beginning of 1997 until August 2012, there was no discernible rise in aggregate global temperatures” is entirely false.

It is also worth noting that this plot differs from the fake graph that accompanied the article by Rose – for instance, in the HadCRUT4 dataset, January 2007 is the warmest month ever recorded, whereas Rose’s graph suggests that it was much cooler.

Why did Rose choose January 1997 as a starting point? In April 1997, the strongest El Niño event of the 20th century was underway, causing global temperatures to become anomalously warm. Hence by choosing January 1997 as a starting point, with the end point in mid-2012 when there was no El Niño occurring, Rose seemingly hoped to maximise his chances of finding a time period over which there was no measurable global warming.

This attempt to hide global warming is a common trick used by self-proclaimed climate change ‘sceptics’. If one considers annual temperatures, there are a number of 15-year sequences since 1970 when warming has been statistically insignificant, and it is obvious that the period since January 1997 is not particularly special.

This table shows how the monthly temperature trend for 15-year periods since 1970 has varied.

It demonstrates that while the data period from January 1997 to the end of 2011 define the lowest rate of warming (0.058°C per decade), the trend not much lower than the rate of warming between 1979 and 1993, or between 1980 and 1994. Furthermore, the table also shows that the data for periods on either side of that cherry-picked by Rose also recorded higher rates of warming.

It is also apparent that Rose’s cherry-picking was deliberate rather than accidental. The Met Office’s press office has published details of its exchange with Rose ahead of publication of his article, warning him “[a]s we’ve stressed before, choosing a starting or end point on short-term scales can be very misleading”.

But Rose was undaunted by the Met Office’s expert advice and steadfast in his effort to force the scientific evidence into the straitjacket of a story which approvingly quoted the new Conservative energy minister, John Hayes, who said at his recent party conference that “the high-flown theories of bourgeois left-wing academics will not override the interests of ordinary people who need fuel for heat, light and transport”.

In an accompanying polemic, ironically under the headline ‘Flawed science costs us dearly’, Rose complained about “the widespread conviction, which is shared by politicians of all stripes and drilled into children at primary schools, that, without drastic action to reduce carbon-dioxide [sic] emissions, global warming is certain soon to accelerate, with truly catastrophic consequences by the end of the century”, before concluding that warming “may be happening much slower than the catastrophists have claimed – a conclusion with enormous policy implications”.

In addition, one should note that Rose’s article arose not from his own investigation but instead, as with all of his previous articles claiming that global warming stopped in 1997, was prompted by Dr David Whitehouse of the Global Warming Policy Foundation. Dr Whitehouse provided Rose with the idea for his article through a blog which was posted on the Foundations’ website on 10 October, stating “[t]he recent temperature standstill is very evident”, but at least acknowledging that the data had been cherry-picked.

Perhaps it is not surprising that ‘The Mail on Sunday’ chooses to mislead its readers in this way, given the dismal track record of its stablemates, the ‘Daily Mail’ and the ‘Mail Online’.

This article originally appeared on the Grantham Research Institute’s website

About the author
Bob Ward is policy and communications director at the Grantham Research Institute on Climate Change and the Environment at London School of Economics and Political Science.