Rising unemployment and long-term unemployment have become increasing concerns for Europe’s policymakers since the onset of the financial crisis five years ago. One option for governments is to shorten the duration of unemployment benefits. Using evidence from Denmark, Stéphanie Vincent Lyk-Jensen and Cecilie Dohlmann Weatherall find that if benefits for the long-term unemployed are limited to four years instead of five years, then there is a significant spike in the likelihood that they will enter the workforce between three and six months before their benefits end.

The problem of long-term unemployment is growing throughout Europe, with around ten million people in this position. For policymakers who also face a squeeze on welfare budgets because of austerity policies, the question remains whether activation measures of any kind can return these workers to the labour market. With this in mind, we investigated whether or not the long-term unemployed would be able to find jobs if benefit periods were shortened. By analysing how the long-term unemployed react to the threat of running out of unemployment insurance (UI) after receiving it for almost four years, we found a spike in the number of people re-entering the workforce three to six months before benefits were due to end, as shown in our Chart below. 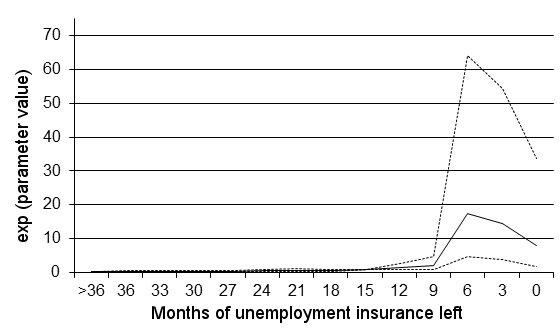 In Denmark some of the long-term unemployed have received UI for several years (up to 5 years until 1998). These workers have a lower possibility of job matching relative to other unemployed individuals and therefore have a higher risk of structural problems in the labour market. The persistence of long-term unemployed workers is problematic for two reasons: First, given unfavourable demographic developments, most welfare states cannot financially afford to have any potential workers not working. Second, some workers appear to be unwillingly long-term unemployed, because they state that they desire work but remain without a job offer.

The implications of UI systems with time-limited benefits have been investigated in the theoretical search literature. The rationale for setting limits is that reducing the potential UI will increase the job search of the unemployed worker whilst UI exhaustion is approaching, because the worker will not want to risk running out of income. Empirically the ‘spike’ in the exit rate from unemployment at the exhaustion of the UI is a well-established result in labour economics.

The presence of means-tested social assistance is a common factor in many European countries. For example Pellizzari  has shown that in the EU, UI recipients eligible for other welfare schemes are less sensitive to changes in the level and duration of their benefits. Indeed, comparing the US and European UI systems shows that the main differences are the length of potential benefits and the existence of other benefits such as social assistance. Whilst eligibility for UI is counted in weeks in the US, it can cover years in Europe.

Finding a spike at UI exhaustion for long-term unemployed in a system providing other benefits will indicate that economic incentives are still working after a long period of unemployment and that shortening the duration of benefits is one way of returning these workers to the labour market. However, this result may not carry over to Denmark because there the unemployed can receive other social benefits (some unlimited in time) and Denmark, together with the Netherlands, had the longest finite benefit period in Europe − about four years – until 2010.

To identify the effect of UI exhaustion, we exploited a legislative change in the duration of benefits that progressively reduced UI entitlement from five to four years. To analyse the effect of UI exhaustion in a benefit system that allows for a long benefit duration and provides social assistance and other welfare schemes to some recipients, we used Danish register panel data on weekly UI observations for the entire population. Our data allowed us to check what happens to the long-term unemployed when they stop receiving UI and whether the shortening of their benefit duration increased their willingness to leave unemployment.

As we use detailed administrative records showing whether the person is receiving other benefits, as well as whether the person has emigrated or died, previous criticism about the lack of measuring whether a person finds a job or leaves the labour market does not apply. Indeed, in Denmark the number of persons not receiving any support whilst they are searching for job is almost zero. Moreover, we have administrative records on all other subsidies a person can receive from the state (e.g. student grant, sickness benefit, disability pension). Thus we can conclude with confidence that the persons exiting unemployment and not receiving any other benefits are employed.

To estimate the conditional probability of leaving unemployment to employment or all other exit states (e.g. social assistance, sickness benefit, student programs, or disability pension immigrate or die), we use a competing risk model.  Figure 1 above shows the clear jumps in the likelihood of moving into employment when the unemployed are close to the end of their benefits. The exit into employment reaches its maximum around three to six months before exhaustion. At this peak the odds of finding employment are increased by 1700 per cent, compared to the reference category 12 to 15 months left before exhaustion. However, Figure 1 shows that the confidence interval for the unemployed individuals having less than a year left on UI is large. Thus a conservative estimate of the effect of UI exhaustion is that the odds of finding employment increase by nearly 500 per cent, compared to the reference category: the unemployed having 12 to 15 months left before exhaustion. The size of the effect depends on the reference category. In addition to the size of the effect, the fact that UI exhaustion still has a positive effect on entering employment −even after more than three years as UI recipients in a welfare generous country− is surprising! Thus one would expect that for other countries having shorter potential benefit durations the effect should still be present.

This article is based on the SFI Paper, The Effect of Unemployment Insurance Exhaustion: Evidence From Denmark and was originally published on LSE’s EUROPP blog.