Between the end of 2007 and the middle of 2009, Britain and the United States experienced the worst recession for more than half a century. During that time entry into high-paying and high-risk private sector jobs declined substantially while many graduates tried to secure employment in less volatile sectors, such as academia. But how may this affect the economy in the long run? Michael Boehm and Martin Watzinger measure significantly higher research productivity for academics that started their career in recession compared to academics that started out in a boom. This suggests that less volatile sectors benefit from recessions in terms of the talent they can attract.

Graduates starting their career in a recession have lower wages, higher unemployment rates, and worse career progression. This is true even more than a decade after the recession has ended. The severe adverse effect of recessions is obvious to anyone who was around during the last seven years. Yet, why does the impact last for such a long time?

One reason seems to be that in recessions graduates choose different types of jobs – voluntary or involuntary – leading to different career trajectories. For example, one study found that MBA students from recession cohorts are much less likely than boom cohorts to secure a well-paying job in finance. Instead, recession cohorts start out (and stay on) in more stable, but lower-paying, sectors. If you went to school in London during 2008/09 – as did one of the authors of this blog – you will know real-world examples to back up the statistical evidence.

But if finance and other high-skill, high-risk sectors employ fewer of the best and the brightest, where do they go to? Who benefits from the reallocation of human capital away from the volatile sectors? In our research we look at one particular sector that might receive some additional inflow of talent during recessions: academia.

Specifically, we collected information about economics PhD graduates from the 30 best universities in the United States over almost four decades. Each person’s data include the graduation year and institution as well as all publications in peer-reviewed journals for the first fifteen years after graduation in order to get information about long-term productivity. We match this data with information about the business cycle (whether the economy is recovering, booming, contracting or in recession).

In normal years economics graduates from these top 30 schools, which could be compared to the Russell Group universities in the UK, are likely to have very attractive options in academic employment at universities and research institutions as well as the private sector, including finance and other high-level professional services. Our conjecture is therefore that some members of recession cohorts extend their education and enter a PhD / doctoral program and maybe even stay in academic research after finishing their PhD.

Academia, as the public sector more generally, is relatively stable over the business cycle in terms of the number of jobs and compensation. Figure 1 underlines this point for our market of PhD economists as it plots the relative number of academic job offers against overall demand. We can see that the two move against each other. Therefore it remains possible and attractive for the most talented individuals to pursue academia even in the worst recession. 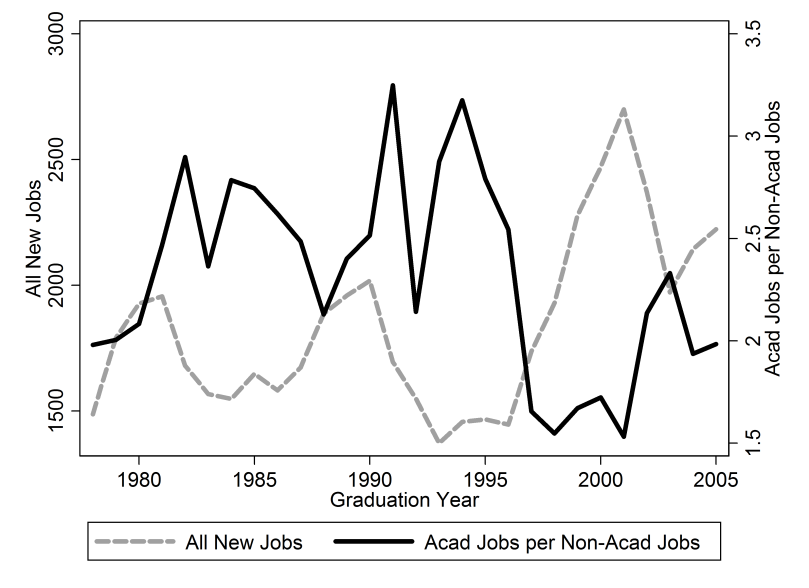 The good thing about studying academics is that their “output” and productivity can be readily measured. Academia and more generally the research and innovation sector have the unique feature that the individual contributors’ names appear on published research papers or patents. In these sectors we can therefore attribute output and productivity to individuals who have started their career during different phases of the business cycle.

Our findings in terms of the impact of recessions in academia are very much in line with our hypothesis: finishing the PhD in a recession makes it more likely for the graduate to stay in academia and on average these researchers are substantially more productive. Per graduate, recession cohorts publish 12% more impact-weighted research papers during the first decade after graduation. This implies that academia really is benefitting from the crisis in terms of the talent that it can attract.

The evidence is even more striking if we look at the business cycle when these individuals applied for the PhD. On the one hand, those graduates who applied during recession times are less likely to end up in academia after they finish. On the other hand, however, those individuals from the “recession-at-application” cohorts who do stay in academia publish 17% more on average.

These findings are consistent with the idea that some very able students who would otherwise have opted for a private sector career decide to pursue graduate education in economics during recessions; and that some of those individuals move to the private sector eventually after they graduate when the recession is over but that also some of them stay in academia and become more productive researchers than the overall average. 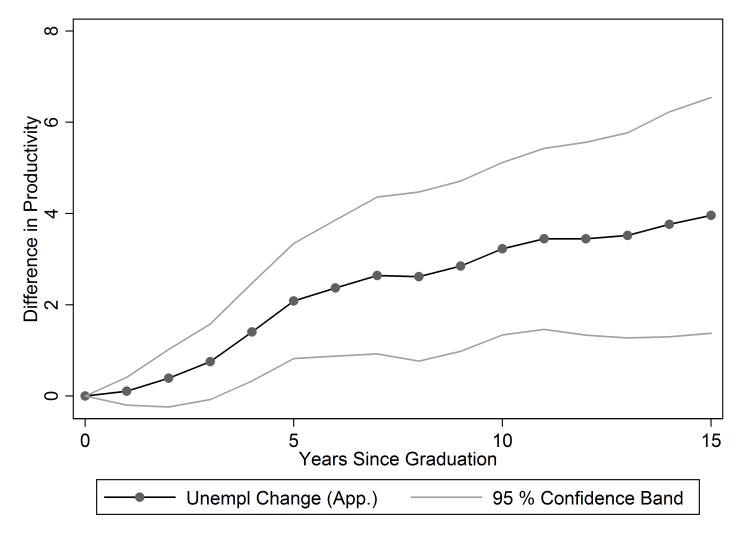 Note: Unemployment change at application is used as a measure of the effect of the business cycle on labour market prospects of workers.

What about the effects for the overall economy?

Of course, academia is a specific sector and what can we learn from our work about the “real world” outside the ivory tower? Quite a lot, we think. First of all, academia is an innovative sector and economic growth in developed countries such as Britain or the United States crucially depends on knowledge creation. Similar effects of recessions are also found for other innovative activities, such as patenting from engineering and science graduates.

Secondly, our research indicates that in recession talent flows to the stable sectors of the economy and that at least some of that talent sticks around: a substantial number of graduates who entered academia because of recession seem to stay in this profession for the next 15 years.  There is good reason to believe that these results will also apply to other stable sectors or professions – such as the public sector, teachers, or doctors. If we then think that these are important, recessions could also have some positive effects amidst all the damage that they do.

The research that the blog refers to can be found under this link.

Michael Boehm- Bonn University and the LSE’s Centre for Economic Performance.
Michael Boehm obtained his PhD in economics from LSE in 2013. His thesis, “three essays on the allocation of talent”, investigated the causes and effects of the allocation of workers into occupations, sectors and locations. He is currently an Assistant Professor at Bonn University and an associate at the LSE’s Centre for Economic Performance. 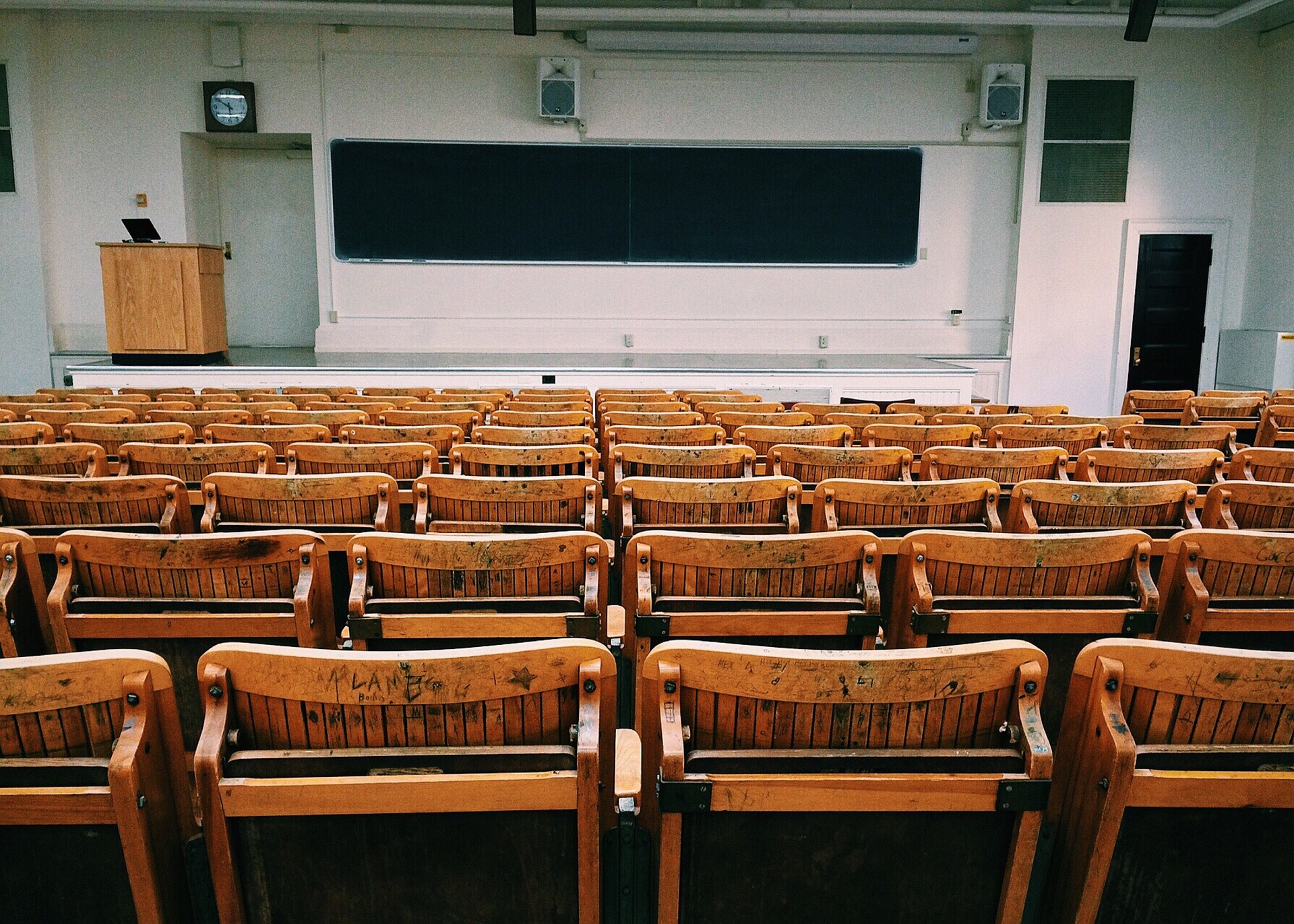 A drop-out crisis looms if students are not supported