As expected, the MPC revised upwards its GDP growth forecasts and predicted a return of the unemployment rate to the 7% threshold 18 months earlier than it previously thought. Costas Milas argues that despite the rising economic optimism and better economic data, unemployment might still take until the second quarter of 2016 to return to 7%.

In August 2013, the Bank of England’s Monetary Policy Committee (MPC) announced its brand new forward guidance policy. The MPC pledged to leave its policy interest rate unchanged (at 0.5%) and support the economy with quantitative easing (QE) at least until the unemployment rate returned from its current 7.7% level to 7% (which, the August inflation report, predicted to happen with a 55% probability only in the third quarter of 2016). Forward guidance would cease to hold if any of the following three “knockouts” were breached: (a) inflation forecasts (18 to 24 months ahead) turned out to be 0.5 percentage points or more above the 2% target; (b) medium-term inflation expectations no longer remained sufficiently well anchored; and (c) the currently loose monetary policy posed a risk to financial stability. 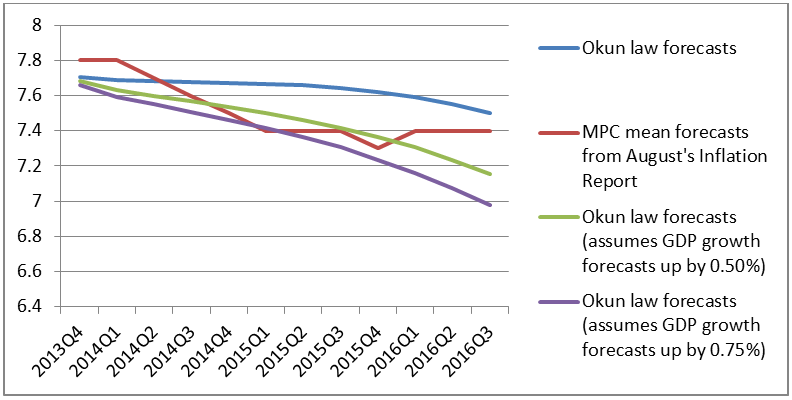 It is not quite clear to me which empirical model (and what type of collective judgement) the MPC members relied on to produce their forecasts. This is not a criticism. To understand their thinking, I run a simple “Okun law” model which estimates changes in the UK unemployment rate as a function of UK GDP growth (based on historical data over the 1970q1-2013q3 period) augmented by a GARCH-type measure of GDP growth uncertainty  The idea is that changes in unemployment rate are negatively related to economic growth and positively related to economic uncertainty. The model uses as inputs the MPC’s mean GDP growth forecasts (see Figure 2) to produce unemployment rate forecasts up until 2016q3. 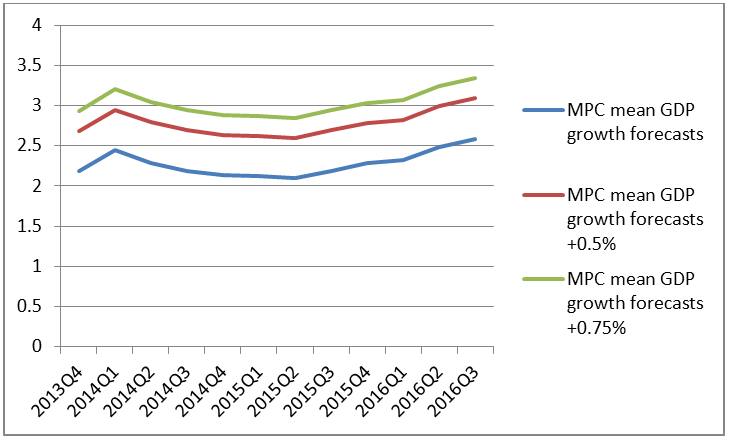 Using the MPC’s mean GDP growth forecasts, a revised set of unemployment rate forecasts are reported back in Figure 1 (labelled “Okun law forecasts”).  Clearly, MPC’s unemployment rate forecasts provide a rosier economic picture since they are lower than those produced by the simple Okun law (which also relies on the MPC’s GDP growth forecasts!).  With this in mind, two tentative conclusions emerge:

Costas Milas is Professor of Finance at the University of Liverpool Management School. Email: costas.milas@liverpool.ac.uk

Tripping up economists, fisking the case against Lords reform and stopping the 0.7% nonsense: Top 5 blogs you might have missed this week