The contributors to this detailed and concise book collectively raise questions about the novelty of the Big Society agenda, its ideological underpinnings, and challenges it poses for policymakers and practitioners. Peter John praises the book for its valuable historical cases and excellent job it does in bringing to bear evidence and examples that are not often discussed by policy-makers. 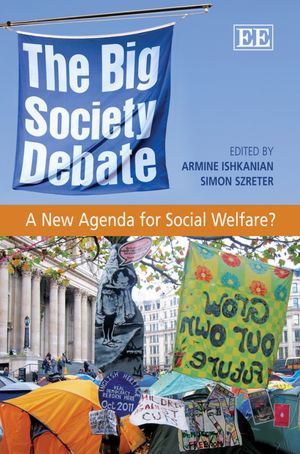 It is easy to parody and mock The Big Society. The journalist Stephen Smith has presented some very funny and telling features on the BBC’s Newsnight television programme, when he and his team vainly tried to stimulate interest in Big Society projects in Hastings. These simulations make the serious point that such proposals are bound to fail because there is no public appetite to do unpaid work, such as collecting litter, planting out public spaces and running public libraries, in place of some of the key activities of the state.

The Big Society is typical of the kinds of slogans that politicians like to promote, which easily get forgotten once the incumbent leaves office. Who remembers ‘The Third Way’ or communitarianism? And no doubt the slogan of David Cameron will suffer the same fate as its predecessors. With these ready targets available, it would be too easy to commission essays that engage in an academic form of mockery, making the same points as journalists do, but critical of a wider political project the appears to tear down the very fabric of the welfare state. The Big Society Debate does not do this: the book contains thoughtful and insightful essays on the concept of the Big Society, using examples from history and other countries to enhance knowledge and to give the term more of a historical and sociological context, something that is not so apparent from government statements and the public pronouncements of politicians.

But I would not have mentioned this problem about talking about the Big Society had it not occurred to me when reading this book. The authors and most of the contributors do not directly parody the Big Society; but it is clear they do not like it very much. For a book with the word debate in the title there is surprising little of it in the book: the authors broadly share the same critical perspective on the project of the Coalition. Lurking in these pages is a similar kind of critique that journalists and commentators like to make. There is nothing wrong with academics doing this. One of the more enjoyable pieces to read is byMartin Albrow: this is a well-written, blistering critique of the use of these big empty ideas by politicians. Albrow makes the credible point that politicians use a slogan like the Big Society in a strategically ambiguous manner for political advantage. Had the book been more of a polemic, it would have less serious, but clearer and more incisive.

Having decided to occupy the higher ground of serious academic commentary, the question becomes what can be achieved with such an approach using the limited form of the essay, which cannot report direct academic research, but only can review examples and make reference to other studies. The danger is that The Big Society Debate falls between two stools: it neither takes a strong stand against (or for) particular policies; nor is there enough space to be a serious academic study of the Big Society and its antecedents. There are some serious academic questions to answer.  Why do governments wish to promote more community action when achieving it is so hard and it is not a vote-winning strategy?  What connects the various efforts of governments in this area – how different were the policies of New Labour, advocated by the former Home Secretary David Blunkett in the civil renewal programme, to the Big Society? The continuing interest in social capital (which is discussed in the book) shows that the Big Society may have a short life as a particular idea but represents one stage in continual set of preoccupations by governments. Politicians want to have a debate about how to design policies to re-define the role of the state and citizen. The book reveals that some of these ideas are being considered by Ed Miliband’s team, so are likely to appear under a Labour government just like they did under Tony Blair and Gordon Brown. Finally, is there hard evidence that shows whether these kinds of programmes work or not?

To this end of answering the big questions, the contributions by historians are very thought provoking. Here the academic historian is able to give a far wider context to these ideas, and recount how they – or similar ones – have been articulated in different contexts. It is valuable to point out these differences and similarities of the use of the term society in past debates, which show the lack of historical awareness of today’s politicians; but I wonder whether knowing these facts helps understand the current preoccupation. Does history have clear lessons for today’s policy-makers? Are there previous forms of community action that could be reinvented and are there some policies that could be avoided, or are the practices of the past the property of previous social and political arrangements and cannot be used to inform the present – at least not in a straightforward way? I found the contribution of Jose Harris very interesting in this respect and it told me much that I did not know before; but it made me think we are very different from our forebears who were operating with distinct values, social arrangements and political struggles that we do not have now or have receded in importance. So it is not really possible to read across the generations; and to be fair, Harris does not say we should.

There are some practical lessons from history, of course. Simon Szreter‘s contribution shows that a voluntaristic approach is not inconsistent with welfare spending – the crowding out hypothesis of the current government is wrong. And surely this is right. Even the most passionate advocate of the Big Society must regret that the arrival of this programme coincides with one of the largest cuts in public spending since 1945, which makes the task so much harder, and also politicises the project and creates more opposition to it. I think the authors fail to acknowledge the large cuts in public finances are not a necessary feature of a desire to encourage more decentralised approach to volunteering and community involvement. Even David Lewis, in his judicious and well-argued conclusion, says that it is impossible to see these two things apart.

Some of the contributors make the fair criticism against the declinism thesis. This claim that community involvement, volunteering and charitable giving are broken in today’s Britain is continually reiterated by politicians. But, as Matthew Hilton’s essay ably shows, the evidence in Europe, in spite of data limitations, says otherwise. Of course, much of this has been said before, such as in the influential paper by Peter Hall; but it is useful to have more of the evidence reviewed, especially from other countries. Also Armine Ishkanian shows how policy-makers want to select examples of success rather than failure when reviewing existing policies, such as from other countries. However, with the recent official interest in experimental evidence such cherry picking might not be so prevalent as it was before. Overall, the quality of evidence is increasing in the field of civic voluntarism something that does not come through in this book except in Liz Richardson‘s piece.

Overall, I am convinced that the contributors do an excellent job in bringing to bear evidence and examples that are not often discussed by policy-makers, and even by some academics. Most of the time the critical tone is kept under control; but the editors cannot resist some cheap shots, such as their statement that the Big Society programme, when replacing local government, “begins to look like some form of vigilante alternative to democratic structures” (p. 6). One might disagree with the government’s proposals, but to describe structures introduced by a democratically elected government as vigilante is not right, even with the qualifications the authors make. But such slips should not take away from the useful corrections to conventional wisdom and valuable historical cases that are in this book.

On Tuesday 19th June 2012, Armine Ishkanian and Simon Szreter launched this book with a discussion at the LSE. Listen to a podcast and see more about the event.

Peter John is a Professor of Political Science and Public Policy at UCL. He tweets at @peterjohn10. Read more reviews by Peter.