The government has attempted to portray the ‘Devo Manc’ proposals for governance change in Manchester as a bold step towards the decentralisation of power in England. Here, Robin Hambleton, explains how the proposals actually represent an extraordinary boost to top down government in a state that is already one of the most centralised in the Western world.

Until this week Prime Minister Thatcher stood tall as the unrivalled centraliser of power in British politics. Her Rates Act of 1984 enabled the central state to decide, over the heads of local voters, how much they would be allowed to tax themselves. In countries that value the importance of local democracy in society, such a centralising step is regarded as incomprehensible.

However, with his speech on 3 November 2014, ‘Manchester to get directly elected Mayor’, Chancellor George Osborne hopes to introduce an era of hyper-centralisation into England, one that goes well beyond the Thatcherite command and control state of the 1980s. So startling is the proposal I suggest we need a new word to encapsulate it.

To Osbornify public policy involves introducing extraordinary measures to boost the power of the central state whilst all the time pretending that power is being decentralised. It takes political spin to a new level of deception. The Chancellor said his proposals to create a directly elected mayor for the Manchester conurbation, with powers over transport, housing, planning and policing, would: ‘… give Mancunians a powerful voice and bring practical improvements for local people’. Not all bad, you might say.

But he went on to state: ‘I want to talk to other cities who are keen to follow Manchester’s lead – every city is different and no model of local power will be the same’. Think about it. The Osborne proposals involve Whitehall taking three massive steps to centralise power:

This is classic divide and rule tactics. Cities around England understand this well enough. However, at this point in time, they have few options. The solidarity of local government is a casualty as localities vie for the bespoke attention of ministers.

A new era of differential treatment and micro-management?

It is disappointing to note that the recent RSA City Growth Commission report on Unleashing Metro Growth says nothing about the centralisation of power that would stem from their proposals. The Commission acknowledges (on page 8) that ‘The UK is one of the most centrally driven countries in the world when it comes to tax raising and spending’. But it then goes on to advocate a ludicrously over-centralised model of decision-making. Under their proposals individual cities will have to prepare detailed metro applications for devolved status.

The dynamics proposed here resemble the dialogue that takes place between autocratic parents and their children over pocket money. The government seems to be saying to cities – by the way counties and country areas are left out of the loop completely which is another major flaw – if you do as I say you can have a bit more to spend.

Learning from other countries 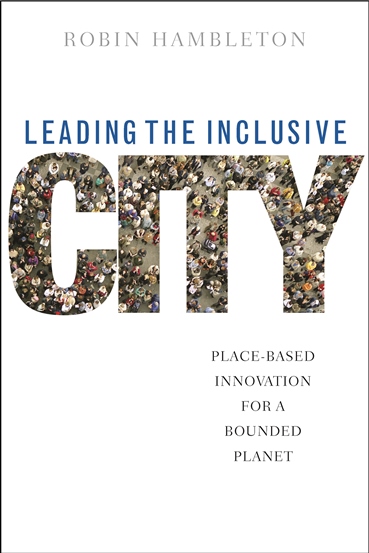 In preparing a new book, Leading the Inclusive City: Place-based innovation for a bounded planet, I have been fortunate to work with some of the most innovative cities in the world to document seventeen examples of bold and effective civic leadership. The Innovation Stories, drawn from fourteen countries covering all continents, show how powerful elected local authorities are advancing social justice, promoting care for the environment, boosting local economies and strengthening community empowerment. Big cities, like Chicago, Copenhagen, Melbourne and New York City, feature alongside smaller cities and localities, like Freiburg, Malmo and Curitiba.

The analysis shows that remarkable improvements in the quality of life can be achieved if central governments get out of the way and let independent, locally accountable local leaders get on with the job. In addition, the evidence shows that liberated local governments exercising major powers attract much higher turnout in local elections. In recent years, with local voter turnout hovering around the 31% mark, British local democracy is sick. It has now established itself firmly at the bottom of the European league tables. In countries with powerful elected local authorities and no overbearing central state the voter turnout in local elections is far higher with, for example, Germany at 70%, Denmark 72% and Sweden 79%.

If Osbornification is to be consigned to history there needs to be a significant rebalancing of power within England. As in every other respected democracy local governments need to be accountable downwards to their citizens, not upwards to distant ministers and civil servants in Whitehall.

On 18 September Scotland came close to breaking away from the UK. The lively referendum campaign demonstrated truly massive frustration with the excessive centralisation of the British state. Believing that adjusting voting arrangements in Westminster – the so-called ‘English Votes for English Laws’ debate – represents an appropriate response is to demonstrate a startling lack of understanding of what is called for.

We need a radical overhaul of the UK constitution. This requires, almost certainly, the creation of a constitutional convention – one that takes account of the voices of civil society, local government and the regions, as well as the political parties. The evidence presented in my book suggests that such a convention would be wise to consider three avenues for reform:

In addition, the convention should adopt an international approach. There are hundreds of thousands of local authorities in the world today and many of them are having a highly beneficial impact on the local quality of life. They promote civic pride, social innovation and place-based creativity. English local authorities can do the same.

This article draws on arguments that are set out in more detail in a new book: Leading the Inclusive City. Place-based innovation for a bounded planet

Note: This article gives the views of the author, and not the position of the British Politics and Policy blog, nor of the London School of Economics. Please read our comments policy before posting. Featured image credit: Richard Heyes CC BY 2.0

Robin Hambleton BA, MA, PhD, MRTPI, FRSA is Professor of City Leadership in the Centre for Sustainable Planning and Environments, Faculty of Environment and Technology at the University of the West of England, Bristol and Director of Urban Answers – a UK based company: http://www.urbananswers.co.uk

The UK is at a constitutional crossroads

Podcast for ‘The End of the Peer Show?: A debate on the future of the House of Lords’ is now available