The budget announcement has been pitched as an end to compulsory annuitisation. More significant, however, is the scrapping of rules limiting the drawdown of funds from private pension pots, writes Deborah Mabbett. The government is taking a risk, but if the state pension is going to have to be paid anyway there are no savings for the Exchequer to be reaped from limiting drawdown.

The Financial Times called it ‘the biggest pensions revolution for almost a century’ but their timing is a few decades out. The Chancellor’s budget announcement on the lifting of constraints on drawing down retirement pension pots is the end of an era that began, not in 1921, but in the 1980s. Under Thatcher, the government sought to curtail spending on the state pension and promote private provision of retirement income. Private pensions would, supposedly, perform so well that state provision could die back under the heavy mulch of the funded layer, managed by our cutting-edge financial services industry and reaping the high returns that followed the big bang of financial market liberalisation. 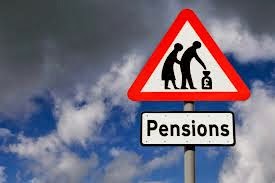 What happened instead was that the inadequacy of the National Insurance pension, linked to prices at a time when wages were rising strongly, brought increasing numbers of elderly people into the means-tested part of the social security system. This system was made more generous under Labour, which at least did something to address the problem of pensioner poverty. But it damaged the strategy of promoting private funded provision, because savers faced a ‘better off’ problem. Basically, it was not worth saving for retirement if the expected level of savings was insufficient to steer clear of means testing.

It was against this background that the Turner review found that we must return to a basic state pension, whether universal or contributions-based, which would be adequate to live on, so that means-tested supplementation could be put back in its box. This was strongly supported by the financial services industry, which had detected the potential for another misselling scandal affecting private pensions taken out by low-income earners.

The industry’s problem became the government’s problem with the advent of automatic enrolment. While this has been marketed to the public as a clever application of behavioural economics, its public policy feedback effects have been neglected. If a government tells everyone that they will be better off saving for their retirement, and ensures that they are defaulted into schemes, then it risks some pronounced negative feedback if people are not in fact better off. The recent scramble to find ways of ensuring that excessive fees are not skimmed from auto-enrolled pensions fed into the decision announced in the budget to allow people to draw on their savings pots as they please.

The government is taking a risk: it is quite likely that many pots will be used up early in retirement, leaving people dependent on the state pension alone. The calculation is that the state pension will have to be paid anyway, so there are no savings for the Exchequer to be reaped from limiting drawdown. This assumes that means-tested supplementation will shrink and become confined to people who would never have saved for retirement. This is the point of the triple lock: it will keep the state pension at a sufficient level of adequacy. For historians of social policy, this is not the biggest change in a century but a return to William Beveridge, who planned that flat-rate National Insurance benefits would drive out the remnants of the Poor Law. That plan failed, but this one might succeed, because the costs of failure will rebound on a government that has become in effect the main sales agent for private pensions.

The budget announcement has been pitched as an end to compulsory annuitisation, brought about by the failings of the annuities market, supposedly about to be forensically exposed by a now-redundant retirement income Market Study. This is smoke and mirrors. The media have proved wonderfully manipulable: few have pointed out that compulsory annuitisation ended in April 2011. What stayed after 2011, and will now go, was a set of rules limiting the drawdown of funds from pension pots. These limits were set with reference to annuity values, but the government had the option of allowing more drawdown, and it exercised this option recently when it raised the drawdown limit to 120% of the corresponding annuity value. If annuities market failure was the problem, the drawdown limit could have been raised further.

The real problem is not the annuities market, but low interest rates on low-risk investments. Low returns are making money purchase pensions look rather sickly at the point of retirement, but they look twice as ill on a realistic assessment of the income stream they will generate. So let’s use a bit more behavioural economics, this time to cover the tracks of low returns. People value the lump of money in their pot at retirement far above the income stream it will generate. The government can avoid a tide of complaint about the results of auto-enrolment by letting people take their pots as lump sums.

So what is the point of auto-enrolment, since it is not to generate a retirement income? Some will invest the money differently: by paying off their mortgage, or buying a rental property. Buying a new car (preferably one that does not depreciate as fast as a Lamborghini), or replacing domestic appliances, or double-glazing the windows, might also be sensible decisions. The government is right that people may find better ways to use the money than the financial services industry can offer them, but it still leaves the question of why exactly auto-enrolment took this money in the first place. Why only get the lump sum at retirement? What about other times in life when a lump sum is useful? Perhaps we should just be allowed to draw down our pots every ten years or so? This is not a rhetorical question: New Zealanders can draw on their auto-enrolled KiwiSaver pots to buy their houses; Americans can take money out of their 401k schemes if they are made redundant or face other major costly events.

It is well-known in public policy-making that problems are redefined to fit the solutions that are available. The solution is auto-enrolment, that beacon of ‘nudge’ policy-making. With a bit of imagination, we find a problem for it to solve. Here it is. The age of eligibility for the state pension is rising. Some people are working longer, but many are not. Life is tough for those who stop working before the state pension age. The available benefits have been cut in real terms: no triple lock for them. The process of claiming benefits, designed to deter scroungers and benefit tourists, will keep many self-respecting citizens from entering the doors of JobCentre Plus. How to survive until reaching pensionable age and entering the promised land, protected by Conservative voters? Answer: tap the pension pot that has been accumulated, which can be accessed ten years before the state pension age. Draw it down carefully, working towards the definite end date of pensionable age, not to an uncertain life expectancy.

One final question: what if about those who really want to save to provide income for their retirement, and do not want to be a landlord, or run their own share portfolio? The Chancellor does have something for them after all. For people aged 65 and over, NS&I will launch ‘market leading’ pensioner bonds, paying a significantly higher return than other safe assets. The financial crisis taught everyone that the financial system is underpinned by the state, but large parts of the industry already knew that. The annuities market in particular has always been heavily dependent on the government to provide the financial instruments that it needs to match its liabilities. Reformers have periodically advocated that the government should boost the market by creating tailor-made instruments such as ‘longevity bonds’ that would shift some risks from the insurer to the taxpayer, a process which we’re now all thoroughly familiar with. In this light, the new bonds from NS&I are a great step forward: pensioners will be able to secure an income stream directly from the government, rather than paying the masters of the financial universe to buy government bonds to back an annuity. No wonder the share prices of some financial intermediaries fell. At this rate, we’ll return to having a welfare state by the back door. It might be expensive, but now that we know how much financial intermediation can cost, the welfare state is beginning to look like quite a good deal.

Note: This article was originally published on The Political Quarterly Editors’ Blog and gives the views of the authors, and not the position of the British Politics and Policy blog, nor of the London School of Economics. Please read our comments policy before posting. Featured image credit: TaxCredits.net

Deborah Mabbett is Professor of Public Policy and Head of the Politics Department at Birkbeck University.