Last month the eurozone returned to recession, three years after it emerged from the deep recession of 2008-09. Paul De Grauwe argues that the current situation has been produced by policy failures at the beginning of the crisis. The best initial policy would have been for the eurozone’s creditor countries to increase spending, while the struggling periphery countries implemented austerity measures. The budget-balancing policies of creditor countries have instead created an asymmetric adjustment process in which most of the adjustment has been carried by debtor countries such as Spain, Greece and Ireland. One mechanism for returning the eurozone to growth may be for states such as Germany, Finland and the Netherlands to maintain small budget deficits while keeping a constant debt to GDP ratio.

This article first appeared on the LSE EUROPP blog

The risk of a double-dip recession in the eurozone had been increasing during the last few months. Figure 1 shows the growth rate of GDP in the eurozone. It can be seen that after a recovery from the deep recession of 2008-09, the eurozone’s GDP growth has been turning again into negative territory since the second part of 2012.

The renewed decline in the growth rates of GDP in the eurozone has the effect of automatically increasing government budget deficits and putting pressure on national governments to avoid an increase in these deficits. As a result, fiscal policies are tightened even further. The risk is that pro-cyclical budgetary policies will push GDP growth rates in 2013 firmer into negative territory, exacerbating the current recession. The asymmetric structure of macroeconomic adjustments in the eurozone has led it towards this situation. A more symmetric approach of adjustment may be a way to avoid it. 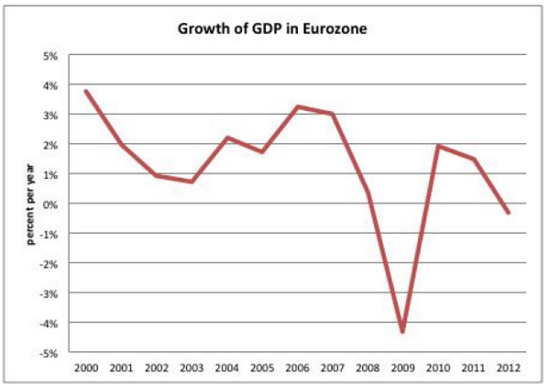 Asymmetries in macroeconomic adjustments in the eurozone 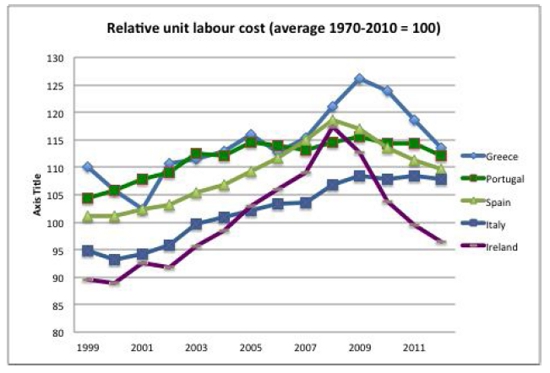 Is there evidence that such a process of internal revaluations is going on in the surplus countries? The answer is given in Figure 3, which presents the evolution of the relative unit labour costs in the creditor countries. We observe that since 2008-09, there is very little movement in these relative unit labour costs in these countries. The position of Germany stands out. During 1999-2007, Germany engineered a significant internal devaluation that contributed to its economic recovery and the build-up of external surpluses. This internal devaluation stopped in 2007-08. Since then no significant internal revaluation has taken place in Germany. We also observe from Figure 3 that the other countries remain close to the long run equilibrium (the average over 1970-2010) and that no significant changes have taken place since 2008-09. 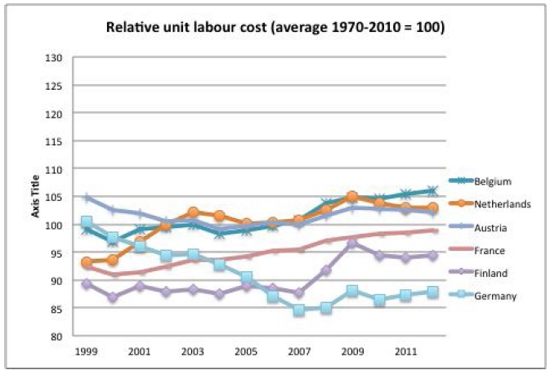 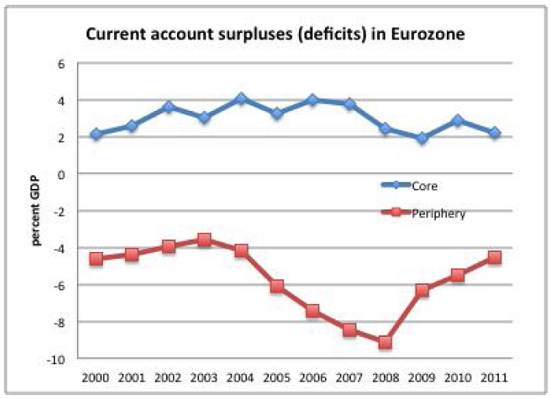 How to recover from the double-dip recession

A symmetric approach should start from the different fiscal positions of the member countries of the eurozone. This difference is shown in Figures 5 and 6, which present the government debt ratios of two groups of countries in the eurozone, the debtor and the creditor countries. One observes from these figures that while the debtor countries have not been able to stabilise their government debt ratios (in fact, these are still on an explosive path), the situation of the creditor countries is dramatically different. With the exception of France, the latter set of countries has managed to stabilise these ratios. This opens a window of opportunity to introduce a rule that can contribute to more symmetry in the macroeconomic policies in the eurozone.

Here is the proposed rule. The creditor countries that have stabilised their debt ratios should stop trying to reduce their budget deficits further now that the eurozone is entering a double-dip recession. Instead they should stabilise their government debt ratios at the levels they have achieved in 2012. The implication of such a rule is that these countries can run small budget deficits and yet keep their government debt levels constant. Germany, in particular, which today has almost achieved a balanced budget, could increase its budget deficit to close to 3 per cent while keeping its ratio of debt to GDP constant. Other creditor countries – Belgium, Netherlands, Finland and Austria – could be urged to stop adding new austerity measures without leading to an increase in their debt-to-GDP ratios.

Whether such a rule will be implemented very much depends on the European Commission. The latter should invoke exceptional circumstances: i.e. the start of a recession that is hitting the whole eurozone and threatens to undermine the stability of the currency area, and urge the creditor countries to temporarily stop trying to balance their budgets. As an alternative rule, the European Commission should convince the creditor countries that it is in both their and the eurozone’s interest that they stabilise their government debt ratios instead.

The more symmetric budgetary policies advocated here would go some way toward reducing the deflationary bias that has been instilled in the macroeconomic policies pursued in the eurozone since the start of the debt crisis, and which have pushed the eurozone into a double-dip recession.

This article is based on material originally compiled for the CEPS commentaries series.