In what is often described as a post-political and post-truth world, is it worth being positive about democracy’s future? Is there even anything new to say about democracy altogether? Inspired by a new book on the crises of American democracy, Matthew Flinders takes a broader view and explains the book’s relevance and reach.

It is a brave scholar who dares to write about the state of democracy in the twenty-first century. What is there to know that we do not already know? What is there to say that has not already been said? Democracy is in crisis. History did not end in 1989. Fluidity defines modernity. We are in a period of post-political, post-truth, post-state, post-fact, post-democratic, post-representative, post-tribal politics about which I am almost post-caring. It was therefore with a certain sense of foreboding and intellectual trepidation that I peeped between the pages of Alasdair Roberts’s new book The Four Crises of American Democracy.

This is a great title. I can almost see the four horsemen of the apocalypse – thunder, lightning, storm, and mizzle* – charging towards Capitol Hill. However, in order to save my less than thunderous fingertips let me re-title the book with the far more hip and youthful acronym – 4CAD.  [Note. If this label takes off and the book flies off the shelves, or down the download wires, I will expect a commission.]

In 4CAD Alasdair Roberts locates the United States’ recent bout of democratic malaise in a larger context, arguing that it is the latest in a series of very different crises that have plagued America throughout the entire post-Civil War era. He focuses on four crises, describing the features of each and outlining solutions the government adopted in response.

The first crisis – the ‘crisis of representation’ – occurred in the late nineteenth and early twentieth centuries, and was dominated by fears of plutocracy and debates about the rights of African Americans, women, and immigrants. The ‘crisis of mastery’ spanned the years 1917-1948, and focused on building administrative capabilities so that government could better manage both an increasingly complex economy and volatile international system. The ‘crisis of discipline’, beginning in the 1970s, was triggered by the perception that voters and special interests were overloading governments with unreasonable demands and the response was to limit government’s reach. The current crisis – what Roberts calls ‘the crisis of anticipation’ – is a future-orientated crisis, preoccupied with the capacity of democratic systems to deal with long-term problems such as the rise of China and climate change.

And yet despite the focus on recurrent crises, Robert’s confidence remains unwavering. ‘A long view of history should give us better grounds for optimism’ he notes in the concluding chapter on ‘Adaptable Democracy’. ‘This is not the first time that the country has sunk into malaise. It is, in fact, a recurrent feature of American politics, and perhaps of democratic politics more broadly’. His core argument is therefore one of almost Obama-esque hope and joy – ‘[T]hese dark moments of malaise have served as preludes to longer periods of ideological and institutional renewal’.

This is a brilliant book and a much-needed antidote to ‘the politics of pessimism’ that swirls around so much scholarly writing and media messaging. And yet – when all is said and done – what is the real sign of a brilliant book? The answer is one that leaves you with a million thoughts and ideas swirling around your mind like autumnal leaves falling from a tree. 4CAD is therefore a brilliant book. 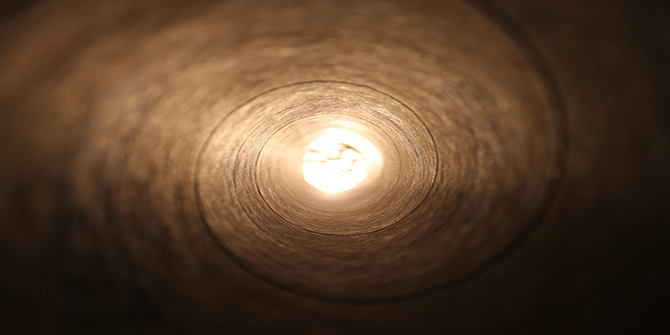 So let me grasp a couple of those leaves out of the air in order to tease-apart the relevance and reach of Roberts’s book.

The first leaf has the word ‘excess’ faintly written upon it. A larger leaf, possibly a small and more scholarly twig, might have had the word ‘hyper-democracy’ etched upon its bark… what a funny tree that would be…but one thought 4CAD left me reflecting upon was whether we might actually have too much democracy. To make this argument is not to adopt a particularly right-wing (or left-wing) position but it is to emphasise the issue of governing capacity and democratic proportionality. Roberts highlights the issue of climate change and offers a four-part recipe for addressing the challenge – more public information, building trust between states, crafting laws that incentivise green energy, and shifting public opinion so that laws are not ignored or evaded – and yet I was left with a sense that these were still fairly soft or ‘light green’ responses to a far starker and more immediate challenge.

The second leaf has the word ‘populism’ inscribed upon it which, in turn, leads us to consider the ‘reach’ or broader international relevance of 4CAD. To some extent Roberts’s historical argument that underlines the adaptive capacity of democracies to respond to crises holds true for many other advanced liberal democracies around the world. The pain and destruction of the Second World War led to the creation of structures to embed nation states in international webs in order to pool resources, share sovereignty, and force politicians to adopt a broader mind-set in a multitude of ways.

Democracy – to put the same point slightly differently – bounced back across Western Europe and then flourished in other parts of the world throughout the twentieth century. And yet Roberts’s positivity is dented by the simple fact that the UK’s Permanent Representative in Brussels has just handed over a letter from the British Government to the European Council President notifying it of the UK’s attention to leave the European Union. The rise of populist nationalism across the world has been one of the defining features of the past five years and shows little sign of waning. My fear is therefore that although the adaptive qualities of democracies should not be under-estimated, so too should their capacity to learn from the past not be over-estimated.

Which brings me nicely to a final leaf; one that is slightly larger, heavier and coloured with the fulsome autumnal colours of yellow and orange; this is a leaf that has been indelibly tattooed with the word ‘Trump’. Writing about contemporary politics is a dangerous game as you can never be quite sure what will happen between the delivery of the final manuscript to the publisher and the date on which the book hits the shelves. In this case, Trump happened.

But what exactly does ‘democrat Donald’ mean in terms of interpretations of crises and fatalism or responsiveness and rejuvenation? Is Donald the ‘fifth crisis of American democracy’ (i.e. 5CAD – rights still reserved) or the paradoxical saviour of democracy in the United States. From one perspective Donald can only be seen in a positive light: on the one hand, the anti-establishment shock candidate and representative of the ‘left behind’, and even if he wreaks havoc and chaos Roberts’s thesis would suggest that a presidential crisis is likely to trigger democratic rejuvenation and a new public philosophy – ‘[a] prelude to longer periods of ideological and institutional renewal’. I just hope that Roberts’s positive defence of democracy proves correct.

Matthew Flinders is Professor of Politics and Founding Director of the Sir Bernard Crick Centre for the Public Understanding of Politics at the University of Sheffield. He is also Chair of the Political Studies Association and a board member of the Academy of Social Sciences. *Eagle-eyed readers will be wondering what ‘mizzle’ is and I am delighted to tell you that it is a traditional English term for fine drenching rain in generally cold and dark weather.