Most election forecasting models aim to predict two things: the number of votes and the number of seats that each party will receive. However, these analyses are normally driven by the (often implicit) question, “which parties will form the next government?” Forecasters tend to avoid giving direct answers to this question because it is difficult to model the bargaining process between the parties that occurs after the election. As most forecasts of the 2015 election point increasingly towards a hung parliament, this question seems increasingly important. In this post, the team from electionforecast.co.uk discuss the potential coalition scenarios that might arise from the election in May.

While we cannot predict with much certainty what the government will look like after the election, we can use our forecasts to make statements about the probable bargaining situations of the parties after May 7th.

There is substantial uncertainty in the exact distribution of seats that might result from any given election. However, a recent paper shows that the various potential seat distributions can be usefully grouped into a smaller number of distinct legislative “types”. These types have important implications for the power of parties in the government formation process, and we focus on four specific types here:

II.     The largest party has more than one possible two-party coalition partner.

III.     The largest party has only one possible two-party coalition partner.

IV.     The largest party has no possible two-party coalition partner.

Throughout this analysis, we make two important assumptions. First, we do not distinguish between formal coalition agreements and “confidence-and-supply” arrangements (we comment more on this below). Second, we assume that coalitions between some parties – formal or otherwise – will never happen, regardless of the legislative arithmetic. We exclude Labour partnering with the Conservatives, UKIP, DUP or Sinn Fein; we exclude Conservatives partnering with Labour, SNP, Greens, Plaid Cymru, SDLP or Sinn Fein. The two most consequential exclusions are the Conservative-SNP coalition and the Labour-Conservative coalition. We feel comfortable excluding the former because of the very clear statements made by the party leaders. We feel comfortable excluding the latter because the UK is unlikely to go to war with Germany anytime soon.

The reason that a typology like this is useful is that the different types have different implications for the bargaining position of each of the parties after the election. Quite clearly, the largest party in a type I system is in a better position than it would be in any other type. It holds a majority of seats and could therefore govern alone, without having to compromise with smaller parties.

Additionally, parties are also in a stronger position if they are the largest in a type II system, than in a type III or IV system. For example, if Labour finds itself as the lead party in a type II scenario, then it will be able to form a majority with more than one potential partner. This puts it in a stronger bargaining position than, for instance, if it were in a type III scenario and could only form a majority with a single partner. In this scenario, that single partner can drive a much harder bargain with Labour, whether in a formal coalition deal or on a vote-by-vote basis if Labour forms a minority government. But this would still be a stronger position than if Labour were in a type IV scenario where it required agreement with multiple partners.

Our forecasting model simulates the forthcoming election thousands of times, resulting in many different distributions of legislative seats. We can categorize each of these distributions into each of the above types, and use this to calculate probabilities. The graph below therefore indicates the probability that the election will result in each of these types: 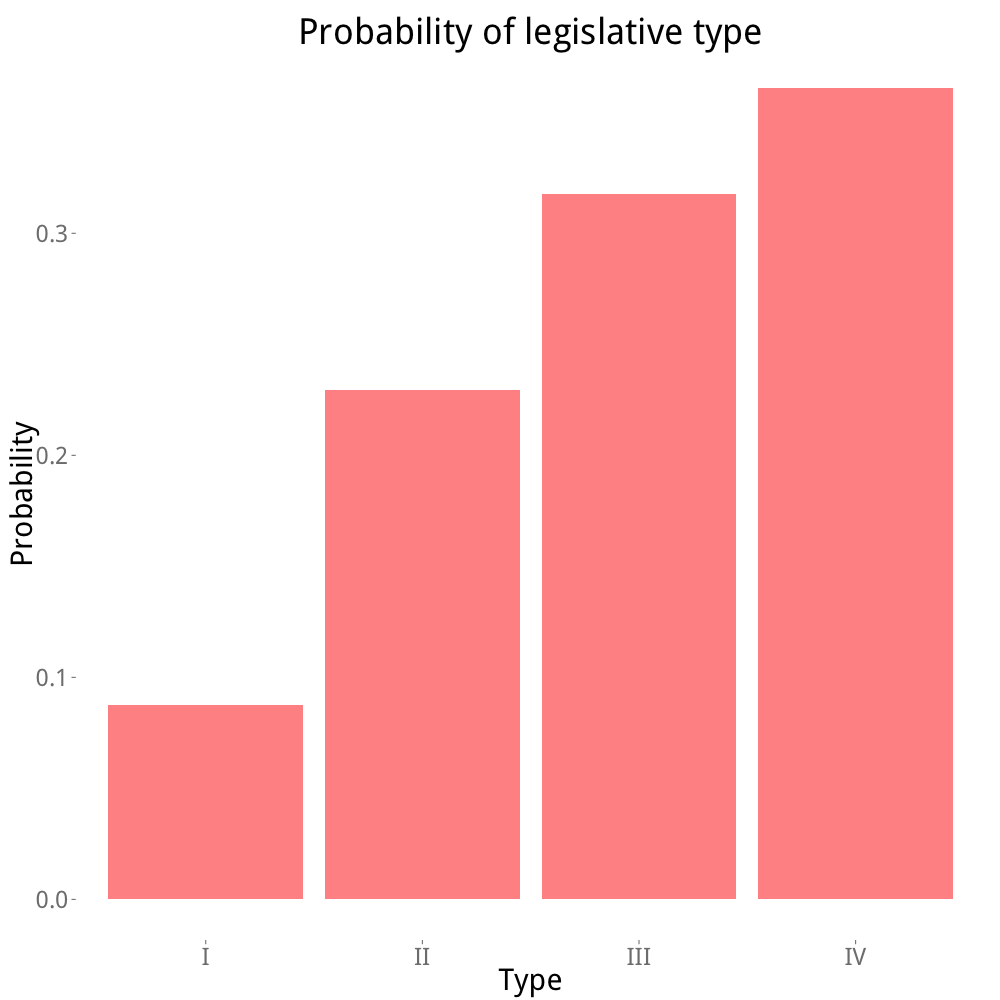 It is clear from this graph that the probability of each type increases as we move from type I to type IV. This suggests that it is much more likely that the election will result in a situation where no two parties are able to collectively reach 325 seats than in a situation where one party holds a majority. In short, there is a good chance that we are heading for a very messy hung parliament in May.

We can go a little further than this by breaking down some of the types into subtypes that depend on exactly which parties are involved:

It is important to note that these probabilities are predictions of what majorities are mathematically possible. They are not predictions of what government will form. First, legislative arithmetic does not determine governing arrangements: just because a party has the seats to govern alone does not mean it will govern alone, and just because a party could reach a majority with another party does not mean it will be able to reach an agreement with that party. Second, and as mentioned previously, these mathematically possible majorities do not help us distinguish between a formal coalition (such as the one formed between the Conservatives and the Liberal Democrats in 2010) and a confidence and supply agreement (where one party relies on the support of another for budget votes and votes-of-confidence).

However, that said, some interesting features arise from these calculations. Most interestingly, the probability of a type IV system is not symmetric across Labour and Conservative plurality scenarios. In 7 percent of the simulated elections, Labour is the largest party and they have no single plausible coalition partner to take them past 325 seats. The corresponding number for the Conservatives is 29 percent – a very large difference. This occurs because we have excluded the possibility of the SNP forming any form of support agreement with the Conservatives, while both the SNP and the Lib Dems might plausibly support a Labour minority government.

For the same reason, if Labour are largest, they are more likely to have multiple potential partners to bargain with than the Conservatives would if they were the largest party. There is only a 7 percent probability that the Conservatives will be able to form a majority with two or more parties (type II), while the comparable figure for Labour is 16 percent. This suggests that, conditional on being the largest party, the Conservatives are likely to face a tougher bargaining scenario than Labour. This could have important implications for post-election negotiations in the event of a hung parliament.

Finally, the different legislative types have had important consequences across a range of outcomes in previous elections across Europe. For example, Mik Laver and Ken Benoit show that the length of government formation negotiations increases as a system moves through the legislative types, with governments in type IV systems taking an especially long time to form. Governments also tend to be less durable when they are formed in “lower” legislative types. Again, type IV systems are particularly prone to early termination. The implication of these findings, in the context of our forecasts for 2015, is that legislative negotiations following May 7th may well be protracted, and that any government that does form may face an uphill battle in staying the course.

Bringing these ideas together, and venturing in a more speculative direction, consider the scenario implied by our current best guess for the seat totals: Conservatives 284, Labour 278, SNP 39, Liberal Democrats 26. This is an example of a type IV scenario with the Conservatives as the largest party, as Conservatives plus Liberal Democrats totals only 310 seats. Bringing in the DUP brings the total to 318, tantalizingly close to the 323 or so seats necessary to survive a confidence vote given that Sinn Fein will not take their seats, but those last half dozen seats will be difficult to secure. This is the kind of situation where the Conservatives might spend most of the month of May searching for a way to turn their plurality of seats into a workable governing arrangement, but very likely without success. Meanwhile, if Labour responds to “losing” the election by turning out Ed Miliband and launching a new leadership election process, government formation might take a very long time indeed.

Note: Some parts of this text originally featured on electionforecast.co.uk. Note that the cells in our table are not logically exhaustive of all possibilities, even if we assume that Labour and the Conservatives are guaranteed to be the two largest parties in terms of seats. For example, in 2010, had Labour won somewhat more seats than they did, either a Labour-Liberal Democrat or a Conservative-Liberal Democrat coalition would have commanded a majority of seats. This is an additional type that we do not list in the table above. Given likely Liberal Democrat losses and the fact that the SNP has ruled out supporting a Conservative government, this situation where a third party can choose between a two-party arrangement with either the Conservatives or Labour is very unlikely to occur in 2015. 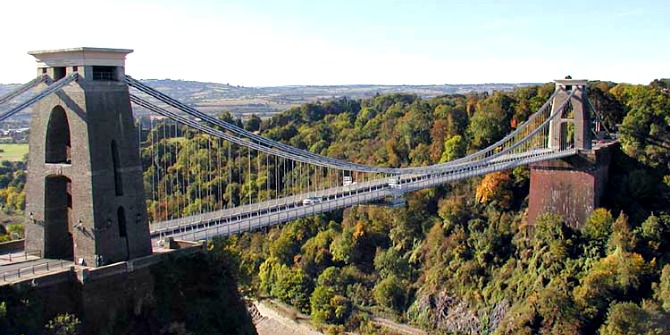 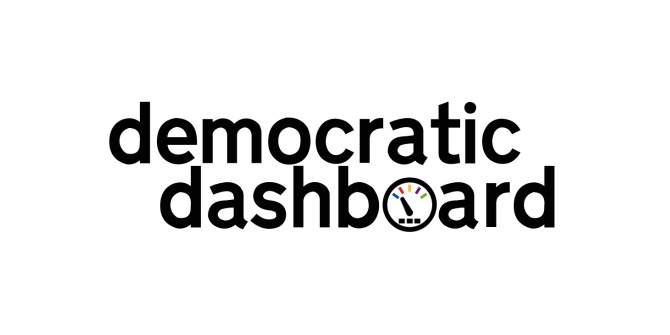