The new cohort of select committee chairs will be scrutinising the work of a weakened government, write Mark Goodwin, Stephen Bates and Marc Geddes. Nine of the 28 are women, reflecting the advantage female MPs enjoy when they stand for committee elections. The current line-up also includes some well-known figures who have clashed with their party leaderships, creating an intriguing new dynamic.

The Conservatives’ poor performance in the General Election raises the prospect that the pendulum of power may have swung towards Parliament and against the government. With a shaky Commons majority, secured only through a semi-formal deal with the Democratic Unionists, and no majority in the Lords, government is much more vulnerable to parliamentary pressure than is usual in British politics.

One important venue of parliamentary scrutiny and accountability is the Commons select committee system, which has just elected a new cohort of committee chairs. These committees allow groups of backbench MPs to scrutinise the work of government departments and to initiate their own inquiries in areas related to the work of those departments. Generally viewed as influential on government policy, they could present innumerable challenges to the government. So, what do the recent chair elections reveal?

Looking at the 2017 chair nominations, we can see that reforms of the committee system in 2010 have only been partially successful. In 2010, committees were reformed so that chairs are elected by the whole House and members by party caucuses, which replaces a previous system of patronage by party whips. While these changes are regarded as generally successful, there are some caveats. As with the two previous chair elections in 2010 and 2015, the degree of competition for places is somewhat less than it might be. Only 11 of the 28 committee chairs were contested with the rest being elected (and in most cases re-elected) unopposed. 17 incumbents were returned unopposed with a further four seeing off challengers to retain their position. This is perhaps justified by the fact that many of the returning chairs who did not face a challenger were only elected two years prior, while many were installed even more recently, including chairs of two new committees (Hilary Benn on the ExEU Committee and Angus MacNeil at the International Trade Committee) created following the referendum on membership of the EU.

As a result, there are not many new chairs following the elections (Rachel Reeves and Lilian Greenwood for Labour; Rob Halfon, Tom Tugendhat, Nicky Morgan and Andrew Murrison for the Conservatives; and Norman Lamb for the Liberal Democrats), although the vast majority (22 out of 28) have been in post for no more than 2 years.

More generally, our previous research has also found little evidence that the 2010 reforms had increased parliamentarians’ engagement with the committee system in terms of attendance or turnover, nor that they had encouraged a new breed of parliamentarian (e.g. younger, less biddable, more rebellious, representing Parliament rather than government, and focused on scrutiny rather than climbing the ministerial ladder (see here, here and here)). As we have explained elsewhere, the degree of competition in the system for the election of committee chairs and members is limited by a number of factors that inhibit the potentially transformative effect of the 2010 reforms – including the absence of frontbenchers from candidacy and electorate, the fact that candidates from opposing parties cannot compete against one another, and the large number of uncontested chairs.

However, and despite these limitations, select committees remain crucial avenues for accountability in Parliament. First, the elections have highlighted Parliament’s ongoing issues with gender diversity, a subject Labour MPs Jess Phillips and Harriet Harman have recently raised in the chamber. In one sense, it is not clear that there is a special problem with committee chairs (as opposed to members). While it is true that only 23% of candidates were female, this is largely a function of the fact that the much less gender-balanced Conservative party (80% male) holds the chairs of most of the committees. However, nine of the 28 elected chairs will be held by women, which is proportionate to the strength of women in the Commons overall. Our own research, and that of Diana O’Brien, has shown that the shift to a system of elected chairs has been advantageous for women, who have a strong record of winning when they stand. In 2017, nine out of 14 female candidates were successful (64%), against 19 out of 40 men (48%).

This continues a pattern that has held since the introduction of elected chairs: women tend to win when they stand. The success rate for female candidates since 2010 is 51% compared to just 40% for male candidates. In 2017, this included victories for female MPs in highly competitive races for Transport (Lilian Greenwood defeating one female and three male candidates), Business, Energy and Industrial Strategy (Rachel Reeves finishing ahead of three male candidates) and perhaps most significantly the Treasury where Nicky Morgan saw off five male challengers to win one of the most high-profile and influential chairs. Morgan’s result is even more noteworthy in context as a chink in a staunchly male policy area: there has never been a female candidate for the Treasury committee chair, the membership of the committee has remained disproportionately male since its foundation in 1979, and the committee’s corresponding department has never had a female Chancellor nor Shadow Chancellor. However, the persistence of male and female portfolios (boys’ and girls’ jobs as the Prime Minister might have it) is demonstrated by the fact that there has still been no female candidate for either the Defence, Northern Ireland or Foreign Affairs committees and only one for the Treasury post.

A second feature of the 2017 chair elections revolves around the type of MP to which the role appeals. There is a clear pattern in the results since 2015 of MPs who belong to out-of-favour party factions putting themselves forward for select committee roles. For these MPs, unlikely to achieve ministerial office, a committee chair seems to function as a consolation prize. In this sense, a committee chair operates as a kind of Europa League place for those with no immediate frontbench prospects.

A more positive reading might be that select committee chairs are becoming increasingly attractive to former frontbench MPs as an avenue for exercising real influence that does not depend on the patronage of party leaders. On the Labour side, for example, prominent non-Corbynites and former Shadow Cabinet members such as Yvette Cooper, Hilary Benn, Mary Creagh and Rachel Reeves will chair committees, while the list of Conservative party chairs and candidates is significantly more liberal and less Eurosceptic than the party leadership, with Tom Tugendhat, Robert Halfon and Nicky Morgan joining fellow Remainers Damian Collins, Sarah Wollaston, Bob Neill and Neil Parish.

This raises the intriguing possibility that Commons select committees, which pride themselves on their consensual and non-partisan approach, could become a venue for cross-party working among MPs who are neither hard Corbynites nor hard Brexiteers. This would present a further headache for a government struggling to pass its Brexit-heavy legislative programme. Not only will the government contend with two hung parliamentary chambers, but it is also deprived of a majority on select committee membership. While legislating for Brexit will surely remain the government’s priority, these developments do suggest that Parliament may be empowered not only in the field of legislation, but also in terms of scrutiny and accountability through the committee system.

This post represents was originally published on Democratic Audit.

Mark Goodwin is a Lecturer in the Department of Political Science and International Studies at the University of Birmingham.

Stephen Bates is a Lecturer in Political Science at the University of Birmingham.

Marc Geddes is a Lecturer in British Politics at the University of Edinburgh.

Featured image credit: Policy Exchange via a CC BY 2.0 licence 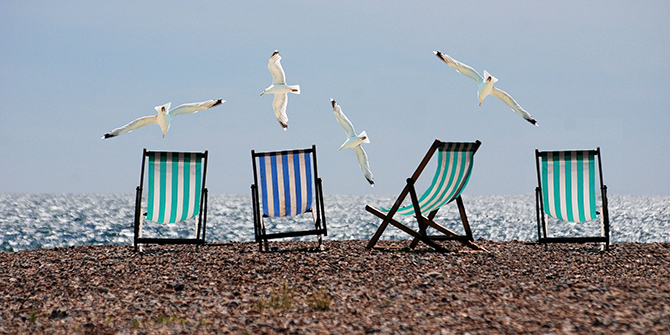