In December, the UK government announced that in future state pension age will rise in line with longevity. Aaron George Grech outlines the thinking underpinning this policy innovation and compares it with other approaches used internationally to address rising longevity. He concludes that while many different complex ‘solutions’ have been devised, their effectiveness will depend on economic behaviour changing significantly. This will require complementary policies, such as ensuring citizens understand their pension system and taking action to improve labour market participation at older ages and among women.

In his Autumn 2013 Statement, the Chancellor of the Exchequer announced that future reviews of State Pension age in the UK will be guided by the principle that “people should expect to spend, on average, up to one third of their adult life in receipt of the State Pension.” The precise formula set out in a DWP note specifies that the longevity measure that will be used will be the Office for National Statistics’ principal projection of cohort life expectancy. Once every Parliament, the Government Actuary will prepare a report assessing whether the legislated State Pension ages remain consistent with the principle. An independent report on other relevant factors, such as differences in longevity between socio-economic groups, will also be made. The review will give individuals ten years’ notice before changes. The latter will pass through Parliamentary scrutiny and require primary legislation.

These decisions bring to a close a debate that started in 2005 with the Second Report of the Pensions Commission, which had argued that “over the long-run, fairness between generations suggests that average pension ages should tend to rise proportionately in line with life expectancy, with each generation facing the same proportion of adult life contributing to and receiving a state pension”. The Report noted that while uncertainties around longevity projections complicate matters, “it will still be possible to follow a policy of significant notice”. Finally it suggested that for “difficult future decisions about the precise trade-off between state pension generosity, public expenditure and State Pension age” to be made effectively, debate should be informed by a body “charged with presenting to Parliament and government every four years a report which spells out the facts and choices required”.

All of this focus contrasts with the situation pre-2005. While the pension system had been changed substantially and frequently, State Pension age had been left unchanged, with the exception of the 1995 Act that had equalised ages between genders. The reasons for the recent interest are varied, but the most crucial is a realisation of the need to address the impact of longevity improvements.

At their inception, pensions were not a social benefit for the masses. Rather, they started as deferred payment for preferred workers (such as civil servants). (One of the first pension schemes was set up for Royal Navy officers in the 1670s.) Collective bargaining and political pressure gradually spread them more broadly. However, even after the post-war expansion of the welfare state, pensions remained conceived as an insurance kind of benefit, as relatively few survived to pension age and for not very long. As shown in Figure 1, life expectancy at birth in 1950-55 was just 69 years in the UK. Less than 11% of the UK’s population were over 65, as can be seen in Figure 2. In most of the rest of Europe, relatively even less people lived beyond 65 and for less time. All this changed with the lengthening of life spans after the 1950s which transformed pensions into a benefit accessed by most citizens and for ever longer periods of time. Coupled with this, the drop in fertility rates after the Baby Boom further boosted the relative size of incoming pensioner generations. 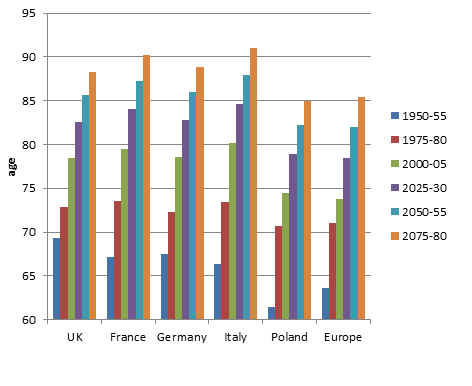 Source: Population Division of the Department of Economic and Social Affairs of the United Nations Secretariat, World Population Prospects: The 2012 Revision 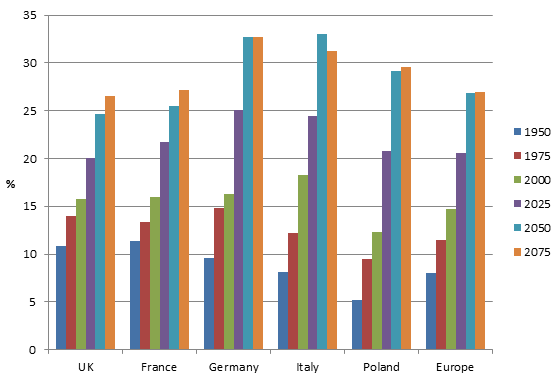 Source: Population Division of the Department of Economic and Social Affairs of the United Nations Secretariat, World Population Prospects: The 2012 Revision

These demographic changes have proven to be difficult to predict. For instance, the Government Actuary’s demographic projections in 1955 assumed that the Baby Boom would continue, resulting in a UK population today about 10% higher than actual out-turns. Similarly, the life expectancy projections made in 1981 implied a life expectancy today of 72 for men, off by nearly ten years.

Trying not to be caught out on a limb again….

These issues are faced by most countries, and in some, for instance Germany and Poland, the magnitude of the demographic changes are more pronounced. Moreover in contrast to the UK, in many countries state pensions are much more generous and their implied cost more onerous.

Internationally pension age changes have been heavily contested and policymakers tended to enact them far in the future (for instance in the US the change was announced twenty years in advance). This changed in recent years, with governments pushing changes more rapidly (for instance the pension age in Germany will be 67 at about the same time as in the US, even though the latter enacted the change decades earlier).

The political complexity of changing pension ages as well as concerns that policymakers may be caught out again by an unexpected rise in longevity have heightened interest in automatic mechanisms, particularly by the European Commission (see here for instance, pp.93-95). Countries like Denmark, Greece and the Netherlands have specified an amount of years for which pensions are to be paid, and mandated changes in the pension age if longevity increases this period. In Notional Defined Contribution systems (such as those in Italy, Poland and Sweden), retiring at the same age despite higher life expectancy automatically lowers benefits. Less well-known are more complex automatic adjustments that affect valorisation or post-retirement indexation. For instance, in Portugal new old-age pensions are adjusted downwards on the basis of how life expectancy at 65 in the year before pension entitlement compares with that observed in 2006. In Germany and Japan the adjustment is conducted on the basis of changes in the system dependency ratio: i.e. when the number of beneficiaries to contributors increases the pension is reduced. The Swedish automatic balancing mechanism is even more complex, adjusting the notional interest (i.e. the valorisation of contributions) whenever a deficit is anticipated between future revenues and outlays. In Canada, the adjustment takes the form of either freezing indexation or else raising the contribution rate.

But there are risks still ahead….

The main risk of automatic mechanisms that impact solely on pensions-in-payment is that they could make them inadequate, particularly for the very elderly. This ‘solution’ is sub-optimal as these pensioners can take very little action to remedy for rising longevity. Adjustments of the pension age are less inequitable, though to be economically useful, countries need to carry out reforms to increase effective retirement ages. Countries like Italy or Poland, where as shown in Figure 3 average career duration is of 30 and 32 years (as against the 49 years between age 16 and 65), may have automatically indexed pension ages, but unless something major changes individuals may just end up retiring on lower benefits. Adjustments that affect valorisation, or like in France the link between longevity and the contribution years required to get a full pension, need to induce longer working lives for them to yield real economic improvements. For this to happen, individuals need to be made quite aware of the incentives in their new pension systems and be in a position to respond to them. 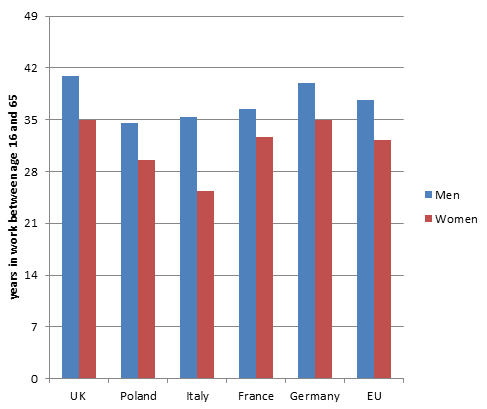 Introducing explicit pension age changes as in the UK or putting in place automatic adjustments like in many EU countries is not the end of the line. The harder work needed to respond to longevity rises by changing economic behaviour may still lie ahead.

Aaron George Grech is a visiting research fellow at the LSE’s Centre for Analysis of Social Exclusion. The views expressed here are those of the author and do not represent those of the organisations with which he is affiliated.

Ireland’s in economic trouble, Guantanamo detainees settle out of court, and the government dumps its data – Blog round up for 13-19 November

The return of ‘sound money’, Clegg is played like the fiddle, and everyone weighs in on the CSR- round up of political blogs for 16-22 October

Inequality, wealth tax and bankers: Top 5 blogs you might have missed this week