Support for pensioner benefits has fallen considerably since the mid 2000s, find Ben Baumberg and Peter Taylor-Gooby when looking at the British Social Attitudes series. Unexpectedly, the most recent decline (2011-2013) is concentrated on people who read particular newspapers; there is a huge decline in support among readers of broadsheets, whether these are the left-wing broadsheets (the Guardian, Independent and i) or the other broadsheets (Times, Telegraph and FT).

Amidst all of the fanfare of the past two British Social Attitudes (BSA) launches, there is a less headline-grabbing story that has gone unnoticed, despite being one of the greatest changes in attitudes in recent years: the strong but declining support for pensioner benefits.  While our respective chapters in the official BSA reports (PTG in 2015, BB in 2014) mention this in passing, we thought that this trend deserved its moment in the limelight here – particularly given its considerable political importance.

Put simply, support for pensioner benefits has fallen considerably since the mid 2000s. The figure below (taken from this year’s just-released BSA report) looks at people’s top two priorities for extra spending among five different types of social benefits. 80 per cent put retirement pensions as one of their top two priorities back in 2005, but this has since fallen to 67 per cent – a level last seen in 1994. 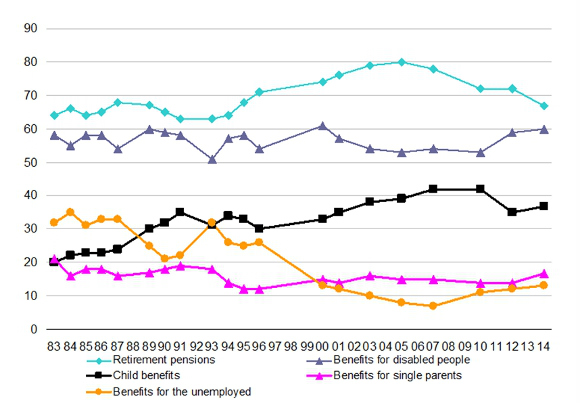 This question is slightly tricky to interpret as it’s about people’s priorities for extra spending compared to one another. It is better to look at whether people want more or less government spending on social security for retired people in its own right, which was last asked the year before.

This is not just because people’s attitudes have shifted in the debates about debt and deficits: similar questions were asked about social security spending on carers, disabled people, low-income parents, single parents, and unemployed people. The fall is over twice as great for retired people as for any other group. (See figure below; full details are in Table 6.3 of the 2014 report). 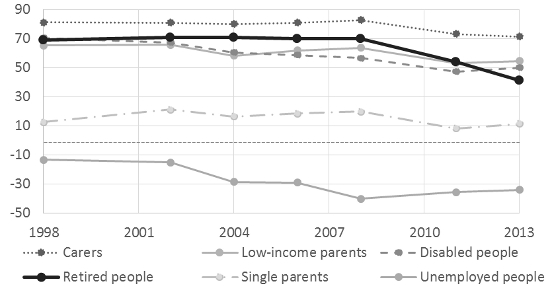 Whose attitudes have changed?

Finding out why these attitudes have changed is tricky, but we get a clue by looking at the type of person that has changed their attitudes the most – and in particular, people of different ages who read different newspapers.

Firstly, it is not the youngest people whose support for pensioner spending has declined most. Initially, from 2008 to 2011, support declined by 11 per cent among 18-34 year olds – but by 15-18 per cent among older groups. And from 2011 to 2013, there was effectively no change among younger people, but a 10-12 per cent further drop among older groups. Since this question was first asked in 1998, this is the first time support among younger people matched that of older people.

Figure 3: Agreement that there should be more spending on ‘benefits for retired people’ in different age groups 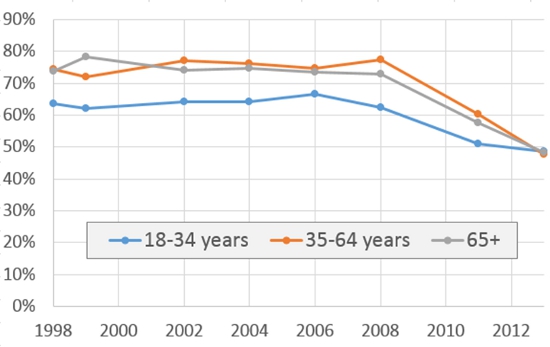 Even more unexpectedly, the most recent decline (2011-2013) is concentrated on people who read particular newspapers. A moderate decline in support (4-8 per cent) was seen among those who do not read a newspaper 3+ times per week (the majority), similar to those reading the Express/Mail, Mirror or Sun. However, there is a huge decline in support among readers of broadsheets, whether these are the left-wing broadsheets (the Guardian, Independent and i) or the other broadsheets (Times, Telegraph and FT) – all of whom saw nearly a 20 percentage point decline in support for pensioner benefits. This isn’t just because people who read different newspapers are of different ages, genders, educational levels or political affiliations – the same trends can still be seen if we hold these constant.

What is going on here?

In explaining public attitudes, BSA reports often talk about ‘thermostatic’ changes – that is, if people want a given level of spending, and think that spending has recently fallen, then they are less likely to want it to fall further. (This is like a thermostat, trying to make the temperature rise or fall to keep a constant temperature.)

For pensioner benefits, the coalition government has been very clear that these will be protected for the life of this Parliament, in contrast to other benefits, as David Cameron said in 2012. Moreover, pensioners’ incomes have been rising over the past ten years, and even over the past five years, in stark contrast to working-age households (ONS 2013). So the general fall in support for pensioner benefits is understandable, even if not predictable.

More mysterious and intriguing is that the most recent falls in support are concentrated among broadsheet newspaper readers. This may be due to changing coverage of pensioner benefits over this period, with wonk-ish broadsheet analysts increasingly arguing for these benefits to be cut on technocratic grounds, in contrast to the emotional pull to defend these benefits among other columnists – but this is speculation at this stage.

Still, there is no need for extravagant rhetoric about collapsing support for pensioners. Pensioner benefits are still widely-supported – they remain the most commonly chosen type of benefit as one of the top two priorities for extra spending, and far more people still want raised spending on retired people than want cuts.

But the extent of the decline in support is striking. If pensioner benefits continue to be protected in the face of wider social security cuts then this trend may continue past the 2015 election – and even in the meantime, the extent of voter support for defending pensioner spending may be strong, but not quite as strong as it was in the recent past.

Ben Baumberg is a Lecturer in Sociology and Social Policy at the University of Kent. He is Co-Director of the Kent Q-Step Centre for the innovative teaching of quantitative social science, and co-founder of the collaborative research blog Inequalities (http://inequalitiesblog.wordpress.com). You can find out more about his research/teaching at www.benbaumberg.com.

How to make the Work Programme work better