If a new government were to raise the top rate of income tax, it is unlikely that the UK’s highest earners will work less hard but it is likely they will try harder to avoid paying tax. That means tougher enforcement will be needed if taxes rise, says Alan Manning.

But the marked rise in income inequality in recent decades together with the deterioration of the public finances after the financial crisis led the Labour government to raise the top rate to 50 per cent (the ‘additional rate’) for those reporting taxable income in excess of £150,000 per annum, taking effect in April 2010 – this affected slightly under 1 per cent of taxpayers. At the same time, the personal allowance was reduced for those with income above £100,000 leading to a marginal tax rate of 60 per cent for those who were affected – those with incomes between £100,000 and £120,000.

The coalition government published a review of the additional rate in March 2012, concluding that the revenue raised had been much less than previously forecast. Based on that analysis, they announced a cut in the top rate to 45 per cent, taking effect in April 2013.

In the current election, the Labour manifesto proposes to restore the 50 per cent rate for those with taxable income over £150,000 while the Green Party propose raising it to 60 per cent. The UKIP manifesto mentions the ambition to lower the rate to 40 per cent. The Liberal Democrat and Conservative manifestos do not mention the top rate of tax though it was widely reported that the Conservatives wanted a rate of 40 per cent when the rate was reduced in 2013.

The main aim of increasing the top rate of tax is to raise revenue at a time when the public finances are in poor shape – over 25 per cent of revenue from income tax comes from the top 1 per cent who pay the additional rate. So how much revenue is raised is a key question. A naïve approach to computing the revenue raised from the 50p rate would be to add up all taxable income above £150,000 at the old rate and multiply this by the increase in the tax rate – this is called the pre-behavioural yield by HMRC. But there is good evidence of a behavioural response of a fall in reported taxable income as tax rates rise leading to a smaller tax take than the pre-behavioural yield would suggest.

There are two main reasons why taxable income may respond to changes in tax rate. First, labour supply responds: for example, people work fewer hours, put in less effort, retire earlier or emigrate. Second, people spend more resources on tax avoidance and even evasion. The evidence for the UK is that the avoidance/evasion response is more important than the labour supply response.

Although the coalition government’s assessment of the 50p rate argued that ‘the overall effect of a tax rate increase on labour supply is negative’ (HMRC 2012, para 2.4) the data do not support this position. A rise in the marginal tax rate for the highest earners would reduce their post-tax hourly earnings to the level of those slightly lower in the current earnings distribution so it is reasonable to suppose their hours would be similar to those worked for that group.

Figure 1 plots average hours of work against percentile in the earnings distribution. Above the median, it is clear there is no relationship between post-tax hourly earnings and hours of work.

Figure 1: Average hours of work across the distribution of earnings: UK, 2013 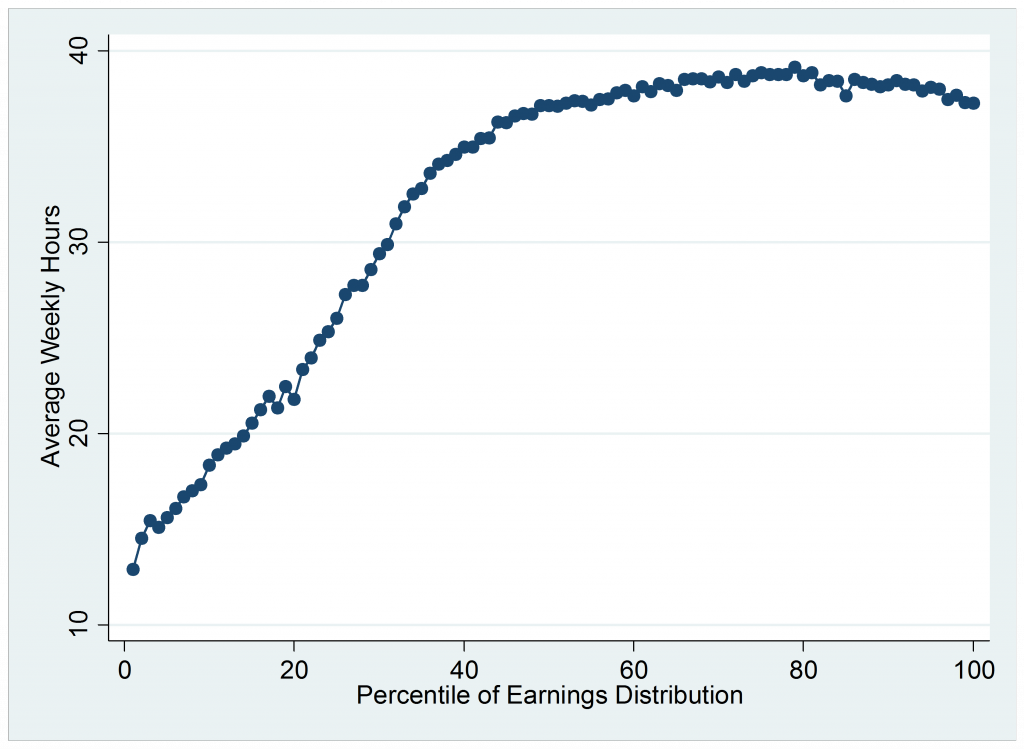 And Figure 2 plots average real post-tax hourly wages for the median worker and the top 1 per cent over the period 1999-2014 together with the average hours of those two groups. This figure shows a number of things. First, over the 30-year period, the incentive to work for the top 1 per cent has risen hugely both in absolute terms and relative to the median worker. But their hours of work have fallen both in absolute and relative terms. The introduction of the 50p rate reduced the incentives to work for the 1 per cent to where they had been in the late 1990s. There is no reason to think their labour supply would have been any different from then and this is a very similar level of hours of work.

Figure 2: Changes in post-tax real hourly earnings and average hours for the median and top 1 per cent 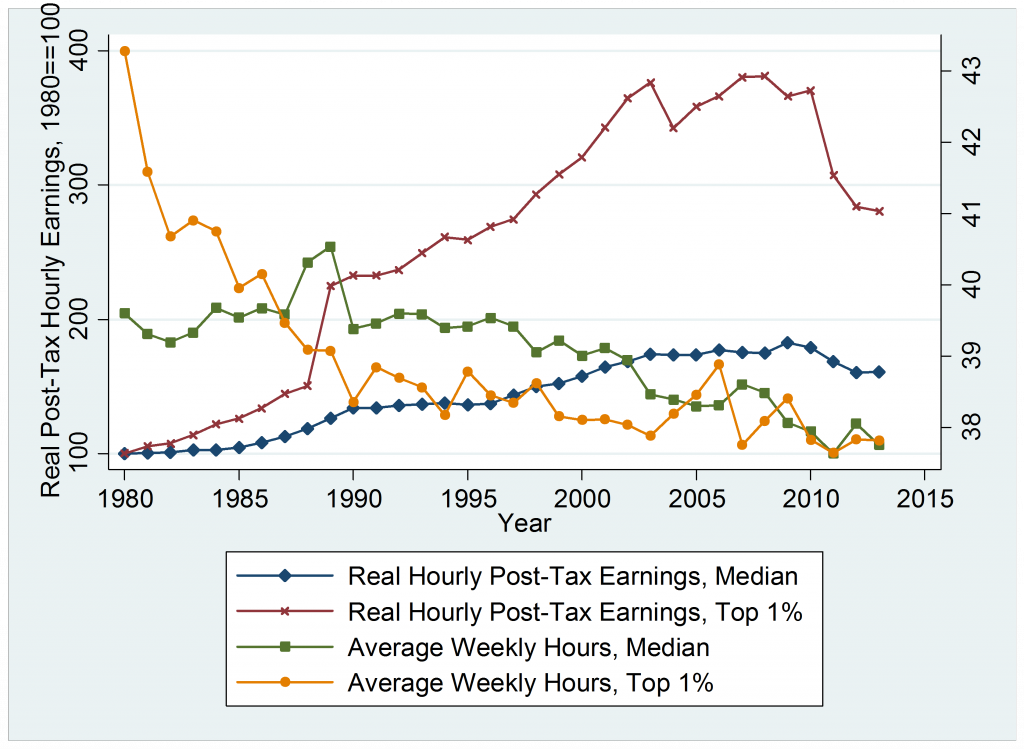 It may be that it is effort not hours that responds to changes in taxes. Effort is hard to measure, but Figure 3 presents some suggestive evidence based on the fraction of employees who report that their job requires very hard work. 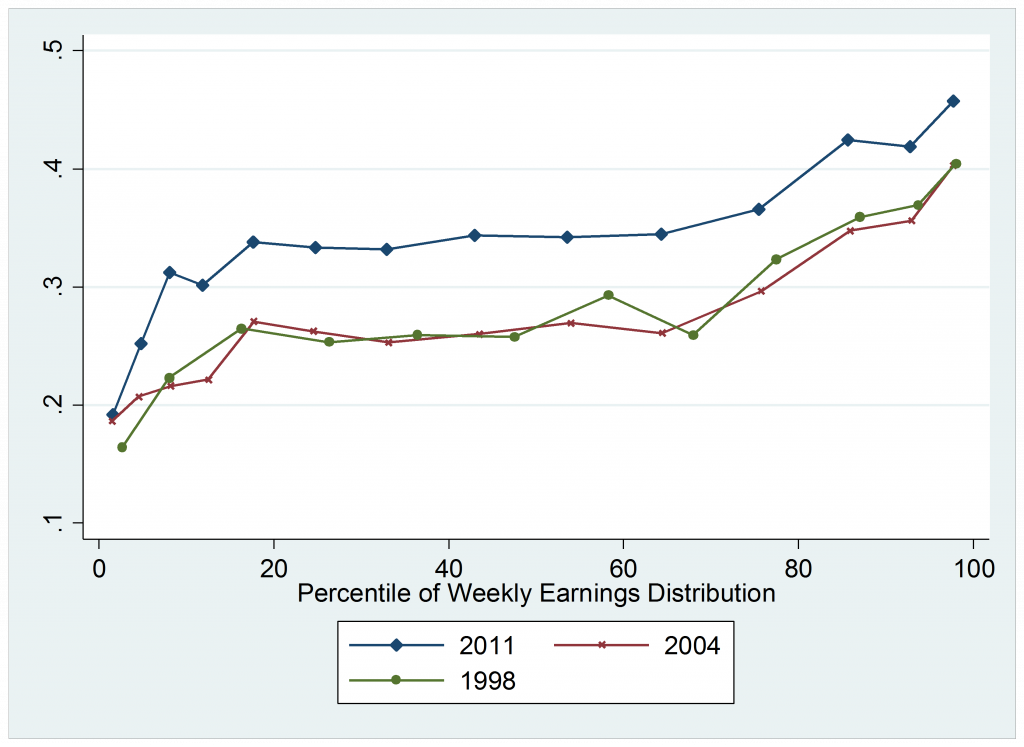 Figure 3 suggests the higher paid do see themselves as working harder than do the lower paid although all groups report higher effort in 2011. But there is little evidence here of a response to changes in post-tax earnings here – between 1998 and 2004 the earnings of those at the top rose relative to the average (see Figure 2) but their effort did not.

It is sometimes argued that the contribution of the highest earners to the economy other than themselves is higher than the tax revenue they pay because their entrepreneurial activities raise economic growth. There is little evidence for this claim – the Scandinavian countries have had high tax rates for decades without drifting ever further behind other countries, as one would expect if there was a sizeable growth effect.

The biggest problem in raising revenue by increasing the top rate of income tax is increased tax avoidance and evasion. We know this can be very large scale – HMRC estimated that £16-£18 billion of revenue out of a base of about £100 billion was moved from one tax year to another when the additional rate was announced. The coalition government has implemented a number of policies to reduce tax avoidance and all the main parties currently say they will do more to combat avoidance with Labour mentioning a target revenue of £7.5 billion.

What this means is that attempts to raise more tax revenue from the wealthy need to go hand in hand with strong rules against avoidance.