Ethical consumption assumes making purchasing choices is akin to voting, and that the consumer can remake the market in line with their views by consistently exercising this vote. Terry Hathaway argues that this assumption is flawed because purchasing as voting is a weak feedback mechanism at best and there are other actors who are able to influence the system.

Ethical consumption is a firmly established element of the British high street. Throughout the 2000s different concerns – organic farming methods, Fairtrade, reduced packaging and higher welfare conditions for livestock – all established themselves as normal parts of the British shopping experience. Even McDonald’s has sought to paint its practices in an ethical light. 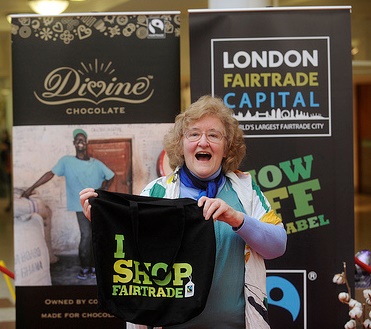 In the US, the idea has gone even further. Instead of mainstream shops adopting some ethical policies, ethically-branded shops, such as Whole Foods, have expanded rapidly and fuelled the idea of a “green lifestyle”. This more expanded idea of ethical consumerism is currently catching on in the UK; indeed, Whole Foods is expanding in the UK and could be coming soon to a place near you.

The more expansive notion of ethical consumerism – whereby it’s a case of making a whole raft of changes to your life, rather than just small changes to purchasing decisions (such as free range over caged eggs) – is both incredibly seductive and very dangerous to the values ethical consumers seek to promote.

The seduction of ethical consumption comes with the idea that making purchasing choices is akin to voting.  Indeed, the late, great propagandist of capitalism, Milton Friedman, once wrote that the market “is, in political terms, a system of proportional representation. Each man can vote, as it were, for the color of the tie he wants and get it.” Thinking in these terms, the consumer is free to realise their own particular interests – “free to choose”, as Friedman’s book was named. The consumer is also powerful in that, by consistently “voting”, they are able to remake the system in line with their views. Ethical consumption, then, chimes with many commonly-held positive views of the current world capitalist order, and is all the more seductive for it.

The danger of a strong belief in ethical consumption comes from three (of many) defects in this account of how purchasing decisions influence the market system. The first defect is that ethical consumption is akin to voting in a system where many of the desired goods are not available for purchase. You cannot purchase clean air, or reductions in CO2 or increased biodiversity; you can only purchase products that may make a small contribution to such a value relative to other similar products. A consumer may buy a hoover that was made with limited pollution seeking to ensure clean air for instance. However, they will not realise their interest unless everyone else makes similar choices. To realise these public goods requires concerted collective action.

In fact, it is on this point that the idea of consumer choice as democracy falls flat. Democracy is not a system whereby everyone makes their own choice and the outcome for society follows from these individual choices. Instead, democracy is where the views of both majorities and minorities are aggregated (with, ideally, conflicts between different interests being resolved in the process of this aggregation) in a system of collective decision making. It is this process of aggregation which is noticeably absent in the Friedman quote above.

The second defect is that, somewhat paradoxically, ethical consumption also obscures choice. Even the most hyper-vigilant, well-informed shopper cannot know everything – the labour (and conditions), the tools (and the production of these tools), the raw materials (and their extraction), the energy, etc. – that goes into making even the most simple products. Instead, the consumer must buy in partial ignorance of all of the factors, primarily on the basis of those attributes that are the most conspicuous and, to some degree, based on trust (no doubt engendered by advertising) in the retailer and manufacturer/s.

Furthermore, there is a degree of ambiguity in just quite what or who you are voting for by purchasing something that complicates the idea further. For example, buying a Fairtrade Nestle KitKat from an Asda works as support for Fairtrade, support for Nestle, support for the particular product and support for Asda – the consumer is in fact voting for a complex production, distribution and marketing chain of which they know little. A further problem of choice being obscured comes in when ethical consumption involves purchasing products made or distributed by a major multinational corporation with many activities around the world. A consumer may approve of KitKats, Nestle, Asda and Fairtrade, but not be aware of the policies of Asda’s parent, Walmart, or of Nestle’s promotion of baby milk in the third world.

Extending this idea further, a consumer’s “vote” for a particular product may support one of the consumer’s values, but it could also equally (and simultaneously) support a value they oppose. So, to return to an above example, shopping at Whole Foods could be construed as support for higher welfare meat and organic agricultural methods, but it will equally support union busting, low wages for workers and right-wing libertarian politics. In short, the personal significance consumers attach to purchasing certain products can translate as a “vote” for a whole host of values they dislike but of which they remain ignorant.

The third defect is that this account of how the market works effectively hides the role of businesses as actors in the marketplace – if consumer are the ones determining the market then corporations are effectively non-actors (or heavily-bounded actors) who do not take decisions in terms of production, marketing and retail in line with their financial bottom line. This discourse thus presents a bizarre inversion of reality, whereby consumers are collectively responsible for corporate decisions, rather than corporations themselves. This fiction facilitates the divisive nature of ethical consumption whereby it is other individuals who are at fault for failing to consume in line with particular values, rather than blaming the corporations who have sought to maximise profit themselves and the system that encourages this behaviour.

In short, a strong belief that ethical consumption will lead to ethical practices is not warranted – purchasing as voting is a weak feedback mechanism at best and there are other actors who are able to influence the system. The danger, however, comes in believing that this mechanism can make substantial political change. Ethical consumption gives the individual the illusion of contributing to progress; of “doing their part” by making purchasing decisions. This illusion can detract, and probably has detracted, from trying to put forward an avowedly political agenda that seeks to mobilise people collectively to make the changes they support. Instead, it individualises ethics, it individualises politics and it reaffirms us as consumers rather than citizens – it is a part of the profit-maximising, pathologically-externalising neoliberal market system that has caused many of the problems ethical consumerism seeks to alleviate, rather than being an alternative.

So, my point is not that consumption issues should be ignored (indeed, the examples given at the start of this post are evidence of minor changes being achieved through consumer action) but that ethical consumption is nowhere close to sufficient to achieve the changes people think they are buying towards. Public goods cannot be purchased by individuals, there are many more dimensions to choice than people realise and businesses play a major role in making decisions in the market. If change is really desired, ethical issues must be repoliticised and worked towards though concerted political campaigns – the revolution will not be bought, as it were.

Terry Hathaway completed his PhD on Corporate Power and US Oil Dependence in September 2013 at the University of Leeds and has since held temporary posts at the Universities of Leeds, Salford and, currently, Sheffield. He tweets @terry_hathaway