With the threat of stagflation and interest rate rises, the current economic climate shows little sign of improvement in the near future. John Van Reenen finds that the government’s severe austerity programme, with its very pessimistic view of future UK growth is risking the recovery through premature scrapping of our economic capital. Policies such as the cap on skilled migrants and the planning decentralisation will reduce the potential for growth, not raise it. Instead, the government should get the conditions right for increasing competition, innovation and education, and  focus on matching the UK’s comparative advantage with areas of future growth such as higher education.

Britain, along with most of the developed world has been through the worst recession since the 1930s and more pain is set to come as the government’s austerity programme bites. With the economy contracting at the end of last year by 0.5 per cent and Pfizer shutting down its main UK research lab (which created Viagra), the Chancellor is looking for the economic equivalent of Pfizer’s little blue pill to boost the UK economy – a ‘Plan V’.

How to get back to Growth: A Plan B to extreme austerity

The UK Government’s Plan A was a sharp acceleration in budget consolidation following its election in June 2010. Whereas Alistair Darling had committed to raising taxes and cutting spending by 5 per cent of GDP by 2016/17, Chancellor Osborne brought the plans forward by a year and increased the budget consolidation to 7 per cent of GDP: the toughest since the Second World War. He also “frontloaded” the consolidation so more pain is going to be borne this year than under Labour’s plans.

Austerity was necessary – the question is how much and how quickly. The accelerated austerity of the present government endangers the recovery, but it also risks longer term growth because of the premature scrapping of fixed capital and human capital. For example, many of those losing their jobs are becoming long-term unemployed who will not recover their skills. Long term unemployment is particularly dangerous as these individuals give up searching for jobs and reduce pressure to keep wage inflation low.

In my opinion, the accelerated austerity programme is fundamentally a mistake because it is grounded in an overly pessimistic view of the UK’s potential output. Just as there was exaggerated optimism over the improvements of the supply side engendered by financial markets in the pre-crisis period, now there is excessive pessimism with some prophets of doom suggesting the UK has permanently lost 7 -10 per cent of its capacity. This ignores real improvements in relative UK performance over the past decade and a half.

But don’t we need this extreme austerity to reassure bond markets? We are in the realms of psychology, but I believe that the March 2010 budget contained a credible deficit reduction programme. Britain’s debt is not enormous by historical standards (79 per cent vs. a three century average of 118 per cent), it has a long maturity and we have never had a formal default. The UK is not Greece. The advantage of frontloading the pain is more political than economic – voters’ memories are short, so in 4 years’ time the pain will hopefully be forgotten.

Reasons to be cheerful?

Despite all the doom and gloom about UK economic performance, the overall position relative to other countries has actually been rather good. The UK had the fastest growth in per capita GDP of the six major advanced countries since 1997 (see Figure 1), even including the savage downturn of the last few years. Part of this was due to labour market policy supporting high employment rates. But an improvement also took place in productivity which has long been Britain’s Achilles heel (see Figure 2). Output per worker overtook Germany’s and bridged some of the gap with France. Although the gap did not close with the United States, the US has enjoyed a “productivity miracle” since the mid 1990s, so just to keep hold of the tiger’s tail was quite an accomplishment. 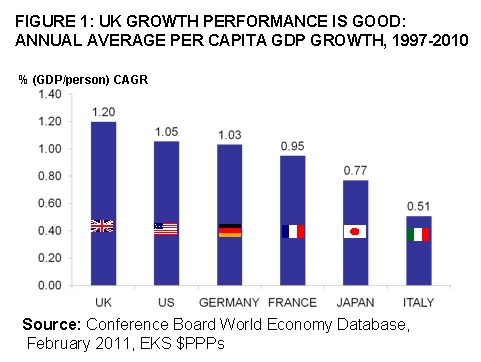 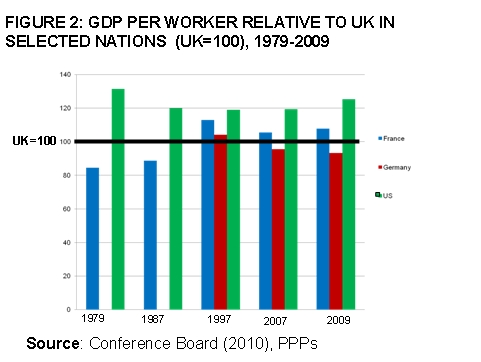 Human capital is one important factor which helped raise productivity, with the proportion of college educated workers almost doubling since 1997 from 15 per cent to 27 per cent. Tougher competition policy and an improved innovation performance also played a part. Still, a sizeable productivity gap remains whose roots lie in innovation and management.

Britain has great strength in elite science, producing 14 per cent of the world’s top scientific papers with less than 1 per cent of the world’s population. Only the US does better, and the UK surpasses the US considering scientific output per dollar of university funding. But commercializing these inventions to profitable ideas remains a problem. Not only does the UK devote less of its national output to Research and Development (R&D), this proportion declined from the late 1970s (see Figure 3) just as other nations were upping their R&D investments. This decline was halted and partially reversed in the mid 2000s due to the introduction of a more generous tax and funding regime for R&D and science. 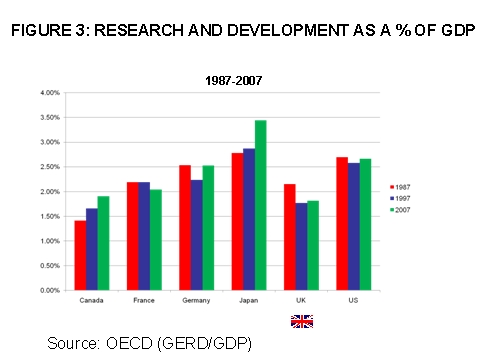 It is a truism that the amount of spending on “hard” technologies is less important than how these investments are used. After all, new technologies are available the world over, but why do some countries and firms appear to make much better use of them than others?

The man on the street’s answer is easy: “It’s management, stupid”. Economists have been traditionally sceptical of this explanation, however, in large part because it is so difficult to credibly measure management. Over the last decade I have lead a major research effort with Stanford’s Nick Bloom and Harvard’s Raffaella Sadun to do just this. It turns out that the common sense answer was right all along: management really matters! 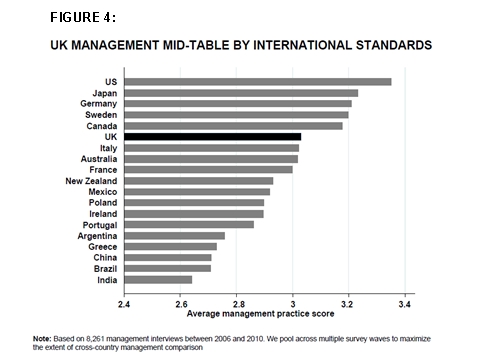 The UK is distinctly mid-table in the management league. The US leads the pack and there is a “Premier League” of Japan, Germany and Sweden. Emerging countries like India and China are unsurprisingly at the bottom, but they are not too far behind Southern European nations such as Greece and Portugal.

Although the cross country averages are eye-catching, there is huge variation of management within every country. Three factors turn out to be major drags on management quality: low competition, human capital and primogeniture (i.e. selecting the CEO as the eldest son of the firm’s founder). These three factors account for essentially all the gap in management between the UK and the US.

What should a growth strategy look like? It must have three elements: modesty, prescience and realism. Modesty means admitting that we don’t know exactly where growth will come from. But what we need is to get the conditions right in the country so that ideas flourish and firms can easily grow to exploit these opportunities. Prescience means a rough and ready mapping out future growth sectors and realism means deciding where our comparative advantages lies (both current and nascent).

The most important conditions are:

Guessing future growth sectors seems like a fool’s errand. But we do have some ideas of where these are – for example, healthcare, education, green technologies, business services and digital businesses. Similarly the UK has clear comparative advantages in areas such as bio-pharmaceuticals, financial and business services, creative industries and some areas of ICT (e.g. Autonomy and ARM). So the task is not hopeless – it is hard to be precise, but there are examples, such as higher education.

Higher Education is a sector where the UK has some comparative advantage with globally recognised universities that attract the second largest proportion of overseas students in the world. In order to create a better higher education market, the increase in the fees cap and the reduction in direct subsidy are the right direction of travel, even though the speed and uncertainty are creating severe problems. More damaging, however, is the decision to cap net immigration at 100,000 per year, as well as the cut in “tier 1” visas for the exceptionally talented and the threat to the Post Study Work Visa. This is economic suicide, and the government should be doing the exact opposite – making it much easier for the very talented to come to the UK to work and study. This will boost a major sector, increase innovation and productivity and may even help curtail inequality by providing more competition for the highly educated.

There is a lot to be optimistic about: the UK made progress in bridging the productivity gap since 1997. But if we remain excessively pessimistic about our potential capacity, we will continue down the current path of severe austerity.  The end of this journey will indeed be anemic growth and poor employment prospects for years to come. It’s time for a Plan V.

On 17 February, John Van Reenen spoke at the LSE event, Where is Future Growth Going to Come From? Click here to download a podcast of the event (40 mb, MP3)