In the new era of austerity inaugurated since the election, one of the most central questions is how British government can do more with less, or at least do nearly the same with less. Leandro Carrera and Patrick Dunleavy clear up the confusions about a key concept – the productivity of the government sector.

The new Chancellor promises to fulfil the Conservatives’ manifesto pledge of significantly cutting public spending in order to improve budget deficit levels. At the same time, the Conservatives promise to improve productivity levels in the public sector so that the cuts do not to affect service delivery.

Productivity directly addresses the challenges of “doing more with the same or even fewer resources.” If a given organisation (or government department) is able to increase the number of service activities (which we term outputs) over time and, at the same time, maintain or reduce resources employed (inputs), it will achieve significant productivity gains.

How we can measure productivity? The chart below gives us some initial answers. Productivity should be simply defined as the ratio of all outputs produced by a given organisation divided by the inputs used to produce them.

Looking at a hypothetical example over time, in the figure below we can see a rising productivity trend for organisation X. While inputs are declining from Year 1 to 4, outputs are increasing over the same period of time, resulting in increased productivity.  This will be the effect that the coalition government is aiming to achieve. And there is good reason to believe that they will gain some of this desired impact, for a while at least. Essentially if you cut staff numbers and freeze staff pay, you can usually achieve much the same outputs in the organization at less cost, for an initial period.

But whether this effect can be sustained beyond the sort term is quite problematic. To get longer term effects, you need longer term strategies. For example, freezing recruitment tends to create staff shortage or overwork problems in a random-ish fashion. As stress piles up, the best and most talented staff (who are the most moveable personnel) may tend to leave more or leave earlier than other staff (depending of course on what the external labour market is like). So the government organization involve could start to ‘hollow out’ in terms of capabilities, a bit like a Swiss cheese. This pattern happened before with the Gershon efficiency review under Labour from 2005-9, and it lead to some significant organizational casualties – including a drastic reorganization of the failing Home Office and some worrying signs of stress in Her Majesty’s Revenue and Customs that are still not resolved. That’s why short-term squeeze effects in boosting productivity may not last for long.

What productivity is and is not

In much contemporary discussion of the public sector, including amongst policy-makers themselves, productivity and effectiveness are often wrongly used as if they are interchangeable. But as our diagram above shows, effectiveness is actually a very different measure – defined as the ratio of the outcomes which an organisation aims to achieve, divided by the total inputs. Thus, effectiveness in the public sector is a much more complex concept and is far more subject to measurement error and to influences from outside developments.

For example, one of the aims of the Department of Work and Pensions (DWP) is to reduce long term unemployment. However, measuring the department’s effectiveness in achieving this outcome can be tricky because there are intervening factors beyond DWP’s own direct control which affect the outcome (such as the state of the economy as a whole, or changes in individuals’ own employability. By contrast, productivity is a much more direct measure. It tells us how productive a given organisation is in transforming inputs into the different outputs which it is responsible for. In DWP’s case, this would include service activities such as the number of benefits paid and the amount of job advice given.

In the private sector, measuring productivity is quite simple because the different outputs produced by a given firm are weighted according to their price and then added to calculate an aggregated output measure. This measure is then divided by the total costs involved in producing them, which yields a total factor productivity ratio (TFP). In the public sector, outputs such as the different social security benefits paid or the different type of taxes collected do not have a price. For many years, statisticians adopted the “easy” solution of assuming that public sector outputs were equal to the cost of producing them. This input = output approach led to an implicit flat productivity assumption. In education, for example, it was assumed that total outputs were equal to the total amount of money spent in the sector.

Since the publication of the influential Atkinson Review in 2005, statisticians and practitioners have started to measure public sector outputs directly. This is done by calculating a total output measure for a given department or public service, weighting different outputs according to their unit-costs (a proxy of how much administration costs are involved in producing each type of output). This cost-weighted output measure is then divided by the total costs. As in the private sector, this provides a reliable productivity measure.

Empirical trends in public sector productivity in the UK

So what do the numbers look like? Part of the National Statistic Office (called the UK Centre for the Measurement of Government Activity) has been measuring productivity in different public services as well as in specific government areas for the last four years. The graph below shows their latest estimate for productivity in the whole public sector.* 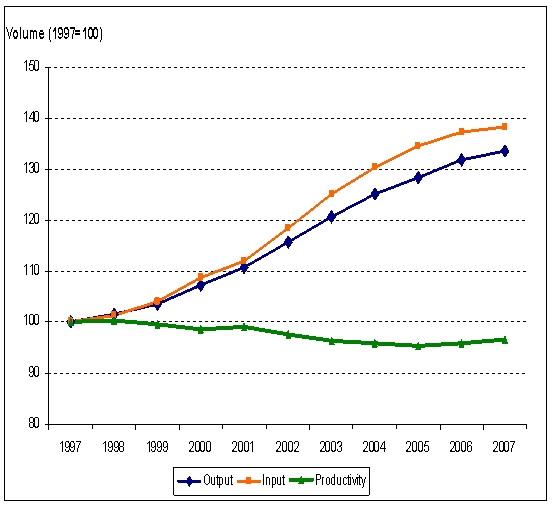 *The services for which output and productivity were measured directly are: Healthcare, Education, Adult Social Care, Social Security Administration, Children Social Care and Public Order and Safety. For Police, Defence and Other public services the input=output approach was used.

As we can see, the data shows a rather negative trend across ten years. In 2007, productivity was still 3.3 percent lower than in 1997. It is important to note however, that this is an aggregated measure that includes different public services with different weights. The data from the NSO also shows that between 1997 and 2007 productivity in social security administration grew by over 10 percent. Meanwhile, in the labour-intensive fields trends were adverse – in healthcare government sector productivity declined by over 4 per cent (although the NHS is insulated from net cuts in coalition government policies) and in ‘public order and safety’ by nearly 17 per cent (although police officer numbers are also being protected against cuts).

Productivity figures can tells us a lot about the performance of specific public services. They can help citizens, stakeholders and public sector staff alike diagnose which public services are “doing more with less” and which are not.