Will the Overseas Electors Bill, proposing to give Britons living abroad the right to vote in UK elections for life, make it beyond second reading? Sue Collard puts recent developments in their wider context and explains their potential implications. She argues that if government does indeed mean business, then the issue is far too important to those affected to justify it being eventually sacrificed to party politics.

An announcement from the Cabinet Office on 8 February confirmed that the government is still committed to implementing a pledge made in the 2014 Conservative Manifesto and endorsed by David Cameron in 2015, to grant ‘Votes For Life’ (VFL) to UK citizens resident abroad. This means abolishing the current rule that disenfranchises UK citizens who have been resident abroad for more than 15 years.

Cameron’s promise was originally made in response to long-standing demands by expat campaigners, whose public figurehead is the indomitable war veteran, Harry Shindler MBE. But he and other activists were deeply aggrieved by the government’s failure to implement VFL before the EU referendum, despite their legal challenge. Verbal commitments under Theresa May to honour Cameron’s pledge before the next scheduled election have done little to reassure them, and it has been widely assumed that this bill was being kicked into the long grass.

That is, until the recent statement, which went further than the simple reiteration of a tired promise. This time it was backed up by the publication of detailed responses to the policy proposals announced in October 2016. This latest document shows that the Cabinet Office has indeed been hard at work, trying to thrash out the complex implications of extending the franchise to what it estimates to be potentially 3 million ‘overseas electors’.

The current system of electoral registration allows ‘expatriate’ citizens to continue to vote for 15 years (by postal vote or by proxy), in the constituency where they were last registered. Until 2015, registration levels for overseas electors were in fact extremely low, largely due to bureaucratic obstacles. But the introduction of online registration in 2014 triggered a massive increase in registration, which was further magnified by the 2016 EU referendum and 2017 snap election, when the number rose to over 285,000. 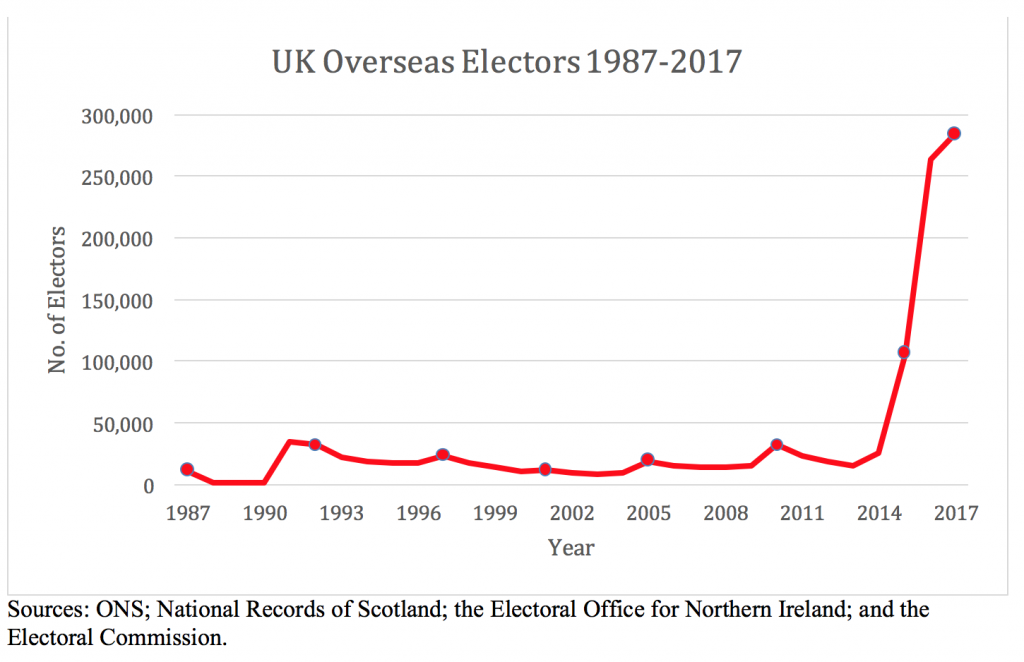 This increase has caused headaches for the electoral authorities, trying to administer an already overloaded and underfunded electoral system. But the introduction of VFL would add to their burden because it means developing a whole new registration process to cater for those whose registration lapsed more than 15 years ago: their previous addresses cannot be verified through the electoral registers because the law does not require electoral authorities to keep these for more than 15 years. The Cabinet Office proposes therefore to allow registration based on proof of previous residence; but this throws up additional complications that have been highlighted by the Association of Electoral Administrators in its response to the consultation.

Certain campaigners have suggested that the creation of dedicated ‘overseas’ constituencies, such as those created by France, Italy, and Portugal, would avoid the problems of establishing proof of previous registration or residence, and would give expats better representation. However, this idea has been rejected by the Cabinet Office on the grounds that it constitutes ‘too fundamental a departure from the existing arrangements’. Besides, it is a proposal that does not sit well with the government’s plan to reduce the number of constituencies.

Does the government really mean business?

Just how significant is the government’s recent announcement? The failure to include VFL in the latest Queen’s Speech suggested that, given the Brexit agenda, parliamentary time would not be found for this bill. Yet February’s press release explicitly makes reference to the imminent second reading debate in the House of Commons of a Private Member’s Bill on Overseas Electors, to be presented on 23rd February by Glyn Davies MP. The implication, now confirmed, is that the government will be supporting this bill.

This is further corroborated by the simultaneous statement from the Chair of ‘Conservatives Abroad’, Heather Harper, who welcomed the government’s renewed commitment to VFL: “The second reading of [the Overseas Electors Bill] brings us closer to getting votes for life for all British expatriates”. Conservatives Abroad have played a key role in getting VFL put on the government’s policy agenda. They have been campaigning on this issue for many years within the party, but it was the advent of coalition politics in 2010 which enabled them to highlight the potential contribution of overseas supporters towards winning selected target seats in marginal constituencies. Their efforts in the 2015 election campaign were rewarded by Cameron’s inclusion of VFL in the Queen’s Speech.

So it looks as if now the government really might mean business on VFL, but this time, spurred on by a different political context: the post-Brexit. The message from Chloe Smith, Minister for the Constitution, makes an explicit link to a brave new vision of the post-Brexit world and the role that expats are expected to play in it:

Following the British people’s decision to leave the EU, we need to strengthen ties with countries around the world and show the UK is an outward-facing nation. Our expat community has an important role to play in helping Britain expand international trade, especially given two-thirds of expats live outside the EU.

Assuming the VFL bill makes it beyond the second reading, we can expect any subsequent parliamentary debate to be highly politicised: opposition parties see VFL not as a progressive move to end the disenfranchisement of potentially millions of its citizens living outside the UK, but as a cynical ploy to increase Tory votes and donations (individuals can only donate if they are on an electoral register). It remains to be seen whether partisan positions based on mere assumptions about the political preferences of expats will continue to hold sway, or whether more substantiated arguments might be brought to bear on the discussions. This issue is far too important to those directly affected to justify its being sacrificed to party politics.

Sue Collard is Senior Lecturer in the Department of Politics at the University of Sussex.