The image below illustrates the large network of what policy academics call ‘active labour market policies’ (ALMPs); or what politicians refer to, in the increasingly Americanised language of social security, ‘welfare-to-work’.

ALMPs are big business.  They are in large part carried out by huge private sector providers, such as A4E and G4S, as well as a ‘supply chain’ that consists of hundreds, if not thousands, of smaller organisations and companies. According to the BBC, the Work Programme alone is expected to cost up to £5bn. But as well as being big business, ALMPs are an integral component of the social security ‘contract’ that exists between the state, the public and benefit claimants.  The contract, so it goes, is that unemployed people agree to a wide range of – often stringent – work-related conditions: this in return for (a) benefits and (b) the provision of back-to-work ALMPs.

The state then, like the unemployed, has rights and responsibilities: the right to expect benefit claimants to take certain steps to get back into the labour market, but also the responsibility to provide good services that enable a transition back to work. So this raises an important question: how well do we actually provide for the unemployed in terms of labour market programmes?

A simple but effective way to answer this is to look at what other countries do. The OECD is a useful resource here, as they collect statistics on how much countries spend on ALMPs.  The graph below shows how much other European countries spent in the most recent year of data collection, as a percentage of GDP.

Spending on ALMPs in the OECD (% GDP) 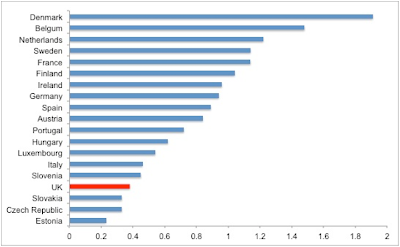 As is obvious, we don’t do very well: spending on ALMPs is just 0.38% of our national income. In fact, the only countries that spend less than us on ALMPs are the former communist states of Slovakia, the Czech Republic and Estonia.  What’s far more normal for countries like us, in terms of GDP, is for over 1 per cent on all spending to go on welfare-to-work, such as in the Netherlands (1.2%), France (1.1%) and Belgium (1.5%).  Denmark, meanwhile, spends a whopping five times more than the UK does on back-to-work schemes.

Our poor record on ALMPs is reflected even more intensely in what the EU calls ‘the activation rate’. This is the number of unemployed people, per 100, who are enrolled onto welfare-to-work programmes. The image below shows the pitiful coverage of UK provision: for every hundred unemployed people, just over one person is participating in activating schemes. This compares to rates of over a fifth in other major West European economies, such as Italy, Sweden, Spain and Belgium.

The ‘activation rate’ in EU countries 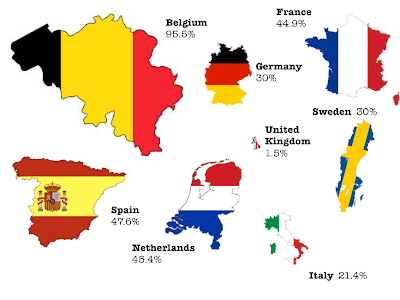 In fact, the UK is bottom of this league table across the entire EU. This means there are a higher proportion of unemployed people on ALMPs in countries like Bulgaria, Romania and Lithuania.  Even tiny Malta has a higher activation rate than the UK. So, whilst the state asks a lot from the unemployed, it simultaneously fails to provide them with a relatively high standard of labour market programmes. The key point here is not that it’s unfair to ask – or even compel – unemployed people to take steps back to work. Rather, it’s unfair that we ask so much of the unemployed yet do so little, compared to other countries, to help them.

David Cameron and George Osborne like to talk about the ‘Global Race’ that the UK is in: a race where we must compete more effectively and efficiently against our economic competitors. Yet if we really are in a ‘Global Race’, then surely a test of how where we stand is by how much our government invests in re-skilling the unemployed. And on this test, we are miserably failing. 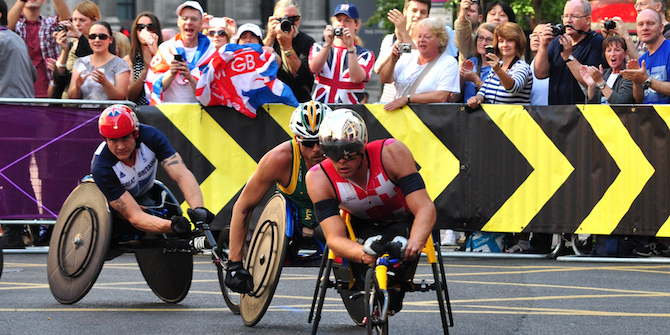