Practitioners and academics in comparative politics frequently refer to a set of ‘Westminster model’ countries which are similar in some way. Meg Russell and Ruxandra Serban show that definitions of this ‘model’ tend to be muddled, or even absent, and that its meaning is far from clear.

The term ‘Westminster model’ appears frequently both in the academic and practitioner literature, and will be familiar to many specialists in comparative politics, public administration, and law. But what precisely does it mean, and is there consistency in its application? Our research addresses this question, based on analysis of the term in the academic literature over the last 20 years. It demonstrates that the use of the term has become extremely confused, leading us to suggest that it should be retired from academic and practitioner discourse.

Authors have often deployed the term ‘Westminster model’ as shorthand for the UK system of government which Bagehot outlined in the 1860s. Bagehot never used the term himself, but it appeared a century later in a classic text by De Smith on ‘Westminster’s export models’. So it does not simply describe the British system, but other systems which were modelled upon it. Comparative texts, for example, often suggest that there is a group of ‘Westminster model countries’, ‘Westminster democracies’ or members of a ‘Westminster family’. The term received a more recent boost when used in the widely-cited comparative texts by Arend Lijphart, which classify countries based on whether they have characteristics of ‘majoritarian’ or ‘consensus’ democracy. Lijphart used the term ‘Westminster model’ interchangeably with ‘majoritarian democracy’, and cited Britain as ‘both the original and the best-known example of this model’. Yet – at Lijphart’s own admission – his ideal type did not precisely apply in any country. For example, he associated unicameralism with majoritarian democracy, while Britain has a bicameral parliament.

Our own casual observation suggested that scholars did not use the term consistently, to the extent that it might now provide more confusion than illumination. We thus set out to explore this systematically. We used bibliographic databases to identify texts which used the term ‘Westminster model’ or various synonyms (‘Westminster system’, ‘Westminster democracy’ or ‘Westminster parliamentary democracy’) for the period 1999–2017. We also searched university reading lists for broad-based courses in comparative politics to identify core textbooks which our database searches may have missed. Once irrelevant texts were excluded, this left 239 items in total, which were coded and analysed systematically.

Our first question was the extent to which the term ‘Westminster model’ (or synonyms) is in fact explicitly defined by the texts that use it. The result of this initial analysis was striking. Among the 239 texts, 71 (30%) used the term without defining it at all. These even included some texts which cited the term in their titles. Often the only clue to what the term might mean was the countries that the text went on to analyse (as further discussed below). We concluded that the phrase ‘Westminster model’ is often used in comparative works to imply presence of a well-defined sampling strategy, or that results are broadly generalisable when based only on a single-country case, without any overt rationale for such a judgment being provided. Often the meaning of the term is simply taken as understood.

Table 1: Extent and type of definitions used in texts referring to the Westminster model 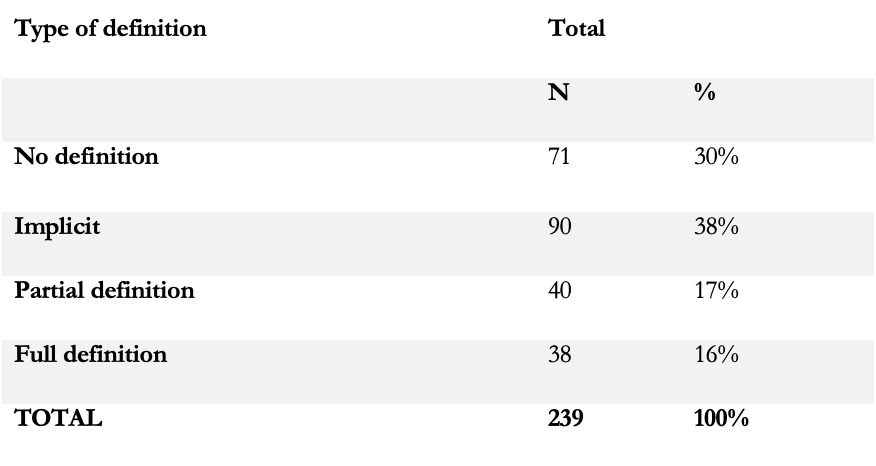 Beyond those texts omitting a definition, some included an ‘implicit’ definition. That is, they lacked an explicit statement of meaning but nonetheless associated the term with certain attributes. Others provided a ‘partial’ definition, explicitly linking the term’s meaning to specified attributes, which might be few or with no indication of whether they comprised a complete list. Only 38 articles (16%) provided what we considered a ‘full’ definition — i.e. an explicit statement of meaning which was also explicitly complete.

Our next question, regarding the ‘intension’ of the term, explored which attributes authors associated with it, and the extent to which these were consistent. Obviously, this second part of the analysis applied only to the 168 texts which included a definition (either explicit or implicit). Here we found a wide variety of attributes associated with the ‘model’. Overall, the commonest (appearing in 28% of definitions) was possession of a first-past-the-post electoral system. In some cases, the ‘Westminster model’ was treated as virtually synonymous with this feature. Such an electoral system is closely linked to other features which were frequently cited in our texts – such as a two-party system and single-party majority governments.

Among texts including a ‘full’ definition, the commonest attribute (cited by 55%) was parliamentary sovereignty, and its corollary of an unwritten constitution. Meanwhile for public administration scholars the Westminster model was associated (or even synonymous) with a neutral civil service, while for other authors the term was associated with centralisation and the absence of federalism. Some texts similarly associated the Westminster model with unicameralism and others with bicameralism.

Our third question related to the ‘extension’ of the term – i.e. the countries in which the ‘Westminster model’ is thought to apply. Here there was a very clear concentration, with the commonest countries being the UK (196 texts), Canada (77), Australia and New Zealand (both 67). Smaller numbers referred to India (13) Trinidad and Tobago (12), Jamaica (11), Guyana and Barbados (both 10) and Ireland (9), with 35 countries cited in total. Clearly all of those named here, having formally been under British rule, could be seen as having a Westminster ‘heritage’. But it is far more questionable what they have in common today. Returning to the attributes above, all of these countries are parliamentary democracies (but so are many others not associated with the model). Yet Australia, New Zealand, Guyana and Ireland do not use the first-past-the-post electoral system, only the UK wholly lacks a written constitution, and Canada, Australia and India have federal systems. New Zealand also moved from bicameralism to unicameralism in 1952. As other authors have noted, the countries associated with the ‘Westminster model’ have, in short, become increasingly diverse. Our article explores whether they even meet the relatively weak requirements of a ‘family resemblance’ concept, and concludes that they do not.

Further examples and exposition can be found in our article. But we have shown, in summary, that the term ‘Westminster model’ is frequently used with little or no definition, is associated with numerous attributes, given varying weight by different authors, with no overwhelming central focus, and is associated with numerous countries, key exemplars of which display few of the clear attributes most commonly discussed

Language in political science and politics changes, and terms regularly fall out of use when they become outdated. The strongest argument for common bonds between ‘Westminster model’ countries is now one based on heritage, and hence possibly on culture. Yet continued use of the term to describe these countries, whose systems now radically differ, risks trapping them in a colonial past. Some scholars may want to compare systems with a shared British heritage, but they should make this attribute explicit, and justify why it matters. Meanwhile, we suggest, it is time for the ‘Westminster model’ to be retired.

Note: the above was originally posted on the Constitution Unit blog and draws on the authors’ published work in Government and Opposition.

Meg Russell is Director of the Constitution Unit and Professor of British and Comparative Politics at UCL. Her books include The Contemporary House of Lords (Oxford University Press, 2013) and Legislation at Westminster (Oxford University Press, 2017). She is currently a Senior Fellow with the UK in a Changing Europe, working on ‘Brexit, Parliament and the Constitution’.

Ruxandra Serban is an LSE Fellow in Qualitative Methodology at the London School of Economics and Political Science. 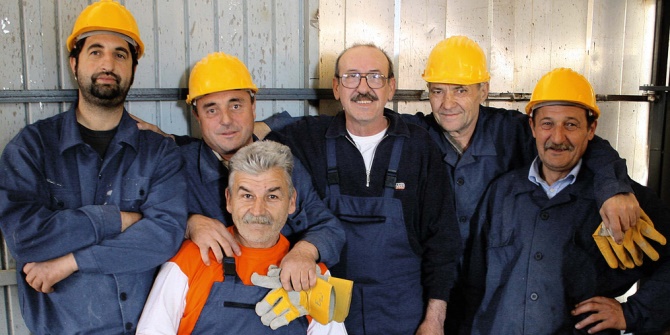