The tragedy of Grenfell Tower brought to the fore some of the issues that characterised the 2017 election campaign – inequality, austerity, and social justice. Considering how much attention has been paid to the political responses to the fire, it is interesting to analyse the ways in which Theresa May and Jeremy Corbyn reacted.

Ancient Greek philosophy, in particular Aristotle’s The Art of Rhetoric, is useful for this purpose. Aristotle’s triptych comprising of ethos (the person/character), pathos (use of emotion) and logos (appeal to reason) makes for an informed analysis of contemporary political leadership as it stresses the nature of communication, the role of discourse, and the relationship between speaker and audience.

The day after the fire, May and Corbyn both visited Grenfell Tower. Ahead of her visit, the Prime Minister issued a statement which was formal and practical. In her response, the emergency services and local volunteers were celebrated, references to the Government’s response included a cross-Government meeting and an inquiry. Although very little was known at this stage, the emphasis upon formality and procedure offered little comfort to the victims. The statement was not heavily covered as live footage of the blaze dominated the news. 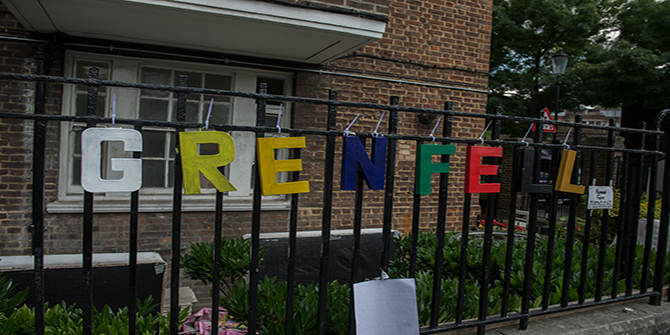 May’s subsequent visit to the scene, however, was covered. Great media attention was paid to the fact that May met with the emergency services but not with the survivors or rescue teams who were nearby. Upon returning to Downing Street, she responded with a statement of intent which focused upon a public enquiry, a response which was again formal and procedural, lacking emotion. More importantly, there was no reference to addressing the immediate aftermath of the situation, especially in regards to providing new housing for survivors:

“We need to ensure that this terrible tragedy is properly investigated. When I went to the scene and spoke to the emergency services, they told me that the way this fire had spread and took hold of the building was rapid, it was ferocious, it was unexpected. So it is right that, in addition to the immediate fire report that will be produced and any potential police investigation, that we do have a full public inquiry to get to the bottom of this.”

In contrast, Jeremy Corbyn met with survivors and rescue workers at the scene. The Labour Leader was pictured consoling a survivor whilst expressing gratitude towards the relief workers, volunteers, and the emergency services, and anger towards the government and the local council that such a tragedy would occur in 2017 Britain. Accompanied by the newly-elected MP for Kensington, Emma Dent Coad as well as John Healey, Shadow Housing Minister, he assured residents that he would be a direct link between their concerns and the government.

“I will speak up for you because we have to get to the bottom of this. The truth has got to come out and it will.” A victim of the blaze replied “the Country needs you”, while survivors and rescue workers shook his hand or patted him on the back. Corbyn’s subsequent formal statement was also personal and context-specific:

I feel very angry that it was possible for the fire to spread in the way it did. I feel very angry that so many have lives have been lost when the system didn’t work. The many residents I met today are very angry too; their concerns about the building were not responded to and their questions were not answered. They asked me to speak for them when I get back to Parliament and I will make sure I do, alongside their new MP Emma Dent Coad. There are thousands of tower blocks around our country. Every single person living in one today will be frightened. They need answers to provide them with security and peace of mind. Kensington is a tale of two cities – it is among the wealthiest parts of this country but the ward where this took place is one of the poorest.

Corbyn’s empathetic response contrasted with that of May’s, which was widely perceived as lacking compassion. Corbyn also called for urgent re-housing of the victims, suggesting the requisitioning of empty properties in the borough. As regards policy, the Opposition arguably had far more scope in proposing the requisition of empty houses than the Government did, in case there could be no requisitioning for legal reasons.

This projection of character by Corbyn had not been emphasised during the election campaign, at least not to the same extent as May’s, whose campaign focused almost exclusively on her and her team. But in Grenfell Tower, Corbyn presented a series of relatable traits. His pathos (his ability to emote) and ethos (character) were linked to his logos (his requests to re-house victims and offering a ‘voice’ to people living in comparable accommodation).

His response was based upon sentiment and humanity rather than underpinned by formality and procedure. Crucially, Corbyn’s response was situational. Contrarily, May’s response was overall considered as not fitting to the crisis. Only after much public criticism did she visit the scene again and pledged a £5million cash fund for residents. Indeed, her inability to show contrition at a time of national grief presented a Prime Minister unable to deal effectively with a crisis.

For all the issues it raises about inequality and public sector cuts, the Grenfell Tower disaster also illustrated the ways in which crisis moments can fashion character, and the ability of the media to promote or demote political persona in the public realm.