It is generally believed that voters are experiencing election fatigue, wanting politicians to sort things out rather than having to go to the polls again. However, data suggests the public actually support an early election. Lawrence McKay argues that this error is driven by lingering pre-Brexit concerns over public ‘apathy’ and by journalists’ anxieties about living in the Westminster ‘bubble’.

Those able to make out the Prime Minister’s Downing Street address on 2 September would have heard an unusual message. Politicians generally seek to puff out their chests for the cameras: no-one wants to expose themselves to – in that deathless political cliché – the charge of being ‘frit’. Yet Boris Johnson used that moment of maximum attention to tell the British people that ‘I don’t want, and you don’t want’ an election. Why? Commentators framed the line as a savvy attempt to get on the right side of ‘Brenda from Bristol’, whose vox pop in 2017 – ‘Not another one!’ – was one of that election’s most viral moments. But are we really a nation of Brendas? The evidence suggests otherwise.

What the data says

Across a swathe of polling data – much of it new, but some of it dating back to 2018 – the public has been moderately favourable to the prospect of a general election. It is difficult to know precisely: surveys are differently worded, present different scenarios, sometimes offer one-sided arguments and so on. For this reason, the range of results is wide: at one extreme, there might be 2:1 support for a general election, but different questions find the public is opposed overall. It is challenging to make sense of this, so I take two different approaches, each of which tell a similar story. 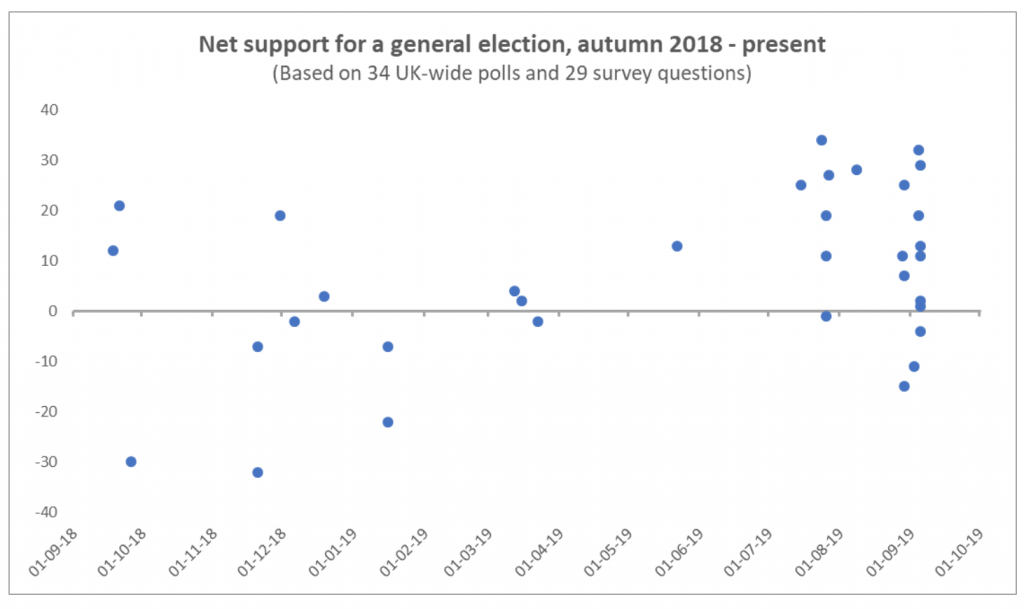 The other possible approach is to look at individual polls that ask the most basic questions. Ipsos MORI, for example, asked ‘To what extent do you support or oppose calling an immediate General Election?’. This is likely to get closer to the baseline, because it does not mention any Brexit scenarios (which in other questions skews results by Remain/Leave), and does not mention any politicians or parties (which provide cues for respondents to follow). The poll took place on the 28 August, before the Downing Street address and before much public interest – as Google Trends data shows. They found that people supported an election, 43-32. A week later, Survation found even more support in favour of ‘an early General Election’, 48-31. In short, there is strong evidence that we are not a nation of Brendas.

One way to look at this data is that it suggests a change in the public mood in favour of elections since 2017, when the Brenda video caught on. This would be incorrect. Instead, Brenda was an outlier even in 2017: after May called the snap election, voters said it was the right thing to do by a margin of 3:1 in YouGov polling. (But because the public were not polled about having an election before it was called, this cannot be directly compared to the 2019 data).

Why Westminster gets it wrong

Brenda-mania may say more about Westminster – and particularly Westminster political journalists – than it does public opinion. I mean this in two respects: how Westminster thinks about the public’s view of politics, and how Westminster relates to the nation in geographical terms.

The first issue is that beginning, roughly, with the famously low turnout 2001 election, and continuing to 2015 and Russell Brand’s famous call for mass abstention, there was a long period where the fundamental ‘threat to democracy’ was political disengagement, or ‘apathy’. In political science the degree of apathy was widely debated, but in Westminster it was an article of faith: newspapers bemoaned the crisis, and radical measures were conceived to address ‘voter fatigue’. For political journalists, this way of thinking has dominated through most of their careers. Yet since 2015, the ground has shifted dramatically. Recent findings on the public’s relationship to politics show that interest, knowledge and intention to vote are higher now than at any point in the last 15 years. Yet journalists’ perceptions of apathy may not have changed as quickly as the data warrants.

This error is likely to be worsened by the geographical concentration of power in the UK. For one, there is an increasing understanding of the problem of the ‘Westminster bubble’, which carries with it a self-consciousness among those whose lives are built around the cut-and-thrust of parliamentary politics. The prominence given to Brenda is partly, then, a well-intentioned attempt to check the London-centric tendencies in their own work and in that of their peers. Yet this can play out in ways that are, unfortunately, partial and misleading. The critic Joe Kennedy has an incisive analysis of a phenomenon he calls ‘authentocracy’, which involves an ostensibly strong interest in ‘real people’ outside London but tends to homogenise them into ‘voice of a nation’ figures.

Why does this mis-reading matter? Perhaps unwittingly, political journalists have given party leaders a useful tool to control the narrative in critical moments of political instability, whether an election actually goes ahead or not. Playing up the public’s weariness can give politicians a license to avoid the electorate’s judgments while superficially representing them. However, if an election does take place, they can show pre-emptively that they are in-touch with an appeal to public ‘fatigue’, while framing their opponents as divisive opportunists. Journalists are supposed to complicate and frustrate convenient narratives – so it would be better to confront the Brenda myth than perpetuate it.

Lawrence McKay (@lawrencemckay94) is a PhD candidate at the University of Manchester.

Book Review: The Cameron Clegg Government: Coalition Politics in an Age of Austerity