The failure of the May 2010 negotiations between the Liberal Democrats and Labour on forming an alternative coaltion will be debated for years to come. Jonathan Hopkin considers some of the deeper-lying issues and historical patterns in the two parties’ working together.

It may be true, as Conservative politicians and Conservative supporters in the press insisted this week, that the electorate would not have understood or accepted a Labour-Lib Dem ‘coalition of the losers’. The Sun newspaper, predicably, articulated opposition to this option in clear and simple language: Gordon Brown was ‘squatting’ in Number 10 Downing Street. But exactly why would a Labour-Liberal Democrat coalition have created a legitimacy problem, and what does this tell us about the British constitution?

To answer this question we need to refresh our memories about what ‘winning an election’ means under the traditional British ‘Westminster model’. Traditionally (or at least since the Second World War), British elections have revolved around the choice between the two dominant political parties: Labour and the Conservatives. In the immediate post-war period, these two parties were very dominant, winning well over 90% of the popular vote until the 1960s, and an even larger share of parliamentary seats. In these circumstances, British elections looked rather like a presidential election, in which the leader of the party with most votes would form a majority government and the role of parliament was invisible to all but political anoraks.

This arrangement has been moribund for around four decades, but strangely the two-party logic still infuses the political debate. The reason is that although the share of the vote won by the Labour and the Conservatives has been in steady decline ever since the 1950s, the decline of the two-party system has been largely masked by two factors. First, the British electoral system vastly over-represents the two largest UK-wide parties, consistently awarding Labour and the Conservatives the vast majority of seats in the House of Commons even as their joint vote share declines. Second, because for most of the last 40 years one of the two parties has performed badly enough to hand a parliamentary – if not an electoral – majority to the other. Labour’s travails gave the Conservatives a free run from 1979 until the 1990s, whilst the Conservatives ceased to be competitive from 1997 until quite recently.

So the current situation has been brewing for a long time, and the two-party system has not been an accurate description of how the British actually vote for decades. And now we come to the question raised above: why not a Lab-Lib Dem coalition? The answer is that many observers (largely for entirely partisan reasons, rather than willful ignorance) continue to interpret the election results as if we still had a two-party system, in which one party’s defeat automatically implied the victory of the other. Certainly, Labour lost the election, as indeed did the Lib Dems. But the Conservatives failed to win the election. Which criteria should therefore inform the choice of government?

The Conservatives, as largest party and closest to a parliamentary majority, were given first shot at making an agreement, and this is consistent with ‘Westminster model’ thinking. It also has crude parliamentary arithmetic on its side. On the other hand the Conservatives are ideologically and programmatically quite distant from the Lib Dems: on Europe, social issues, the constitution, and  – to the extent that we can tell – on the economy. This is not news to anyone who has observed the British party system over time: the chart below shows how the British parties have located themselves on a left-right scale (positive numbers indicate a right-leaning manifesto, negative numbers a left-leaning one) in postwar elections up to 2005 (data from the Comparative Manifestos Project). The chart shows that ever since the 1970s, the Liberals and their successor parties have been located closer to Labour than the Conservatives (and indeed, that under Tony Blair Labour were at times closer to the Conservatives than were the Lib Dems!). 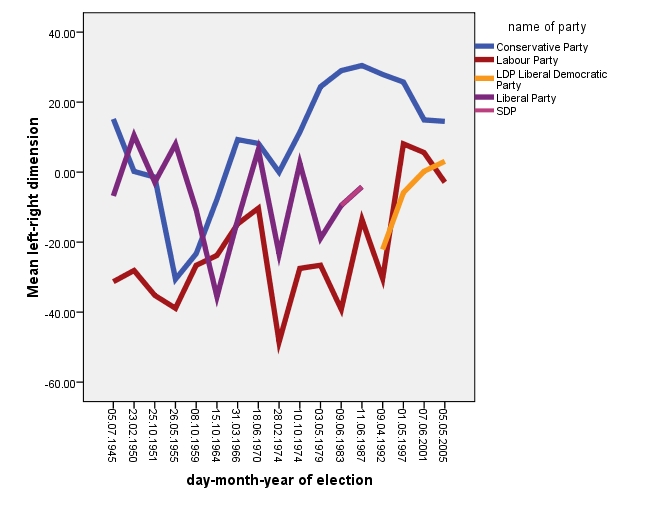 Of course, ideological closeness alone cannot justify the formation of a governing majority – the raw parliamentary numbers need to be there too. Here the Lab-LibDem option looks weaker: 258 + 57 = 315, 8 seats short of the effective majority. But minority governments of this kind occur regularly in democracies as diverse as Sweden, Norway and Spain. Moreover, the election results tell us that around 52-3% of the electorate voted for a government including either Labour or the Lib Dems. So, unless we assume that Lib Dem voters are markedly more inclined to support a Conservative government than a Labour one, then actually public opinion should be able to live with this.

This shows up the contradictions of our majoritarian model of democracy, in which we declare ‘winners’ and ‘losers’. This logic only works if the ‘winners’ can get a parliamentary majority. If they can’t, then the parliament, containing 8 different parties (Sinn Fein don’t show up), has to ‘cobble together’ a majority. In most western democracies, this is how governments are formed. We’re probably going to have to get used to it here too. 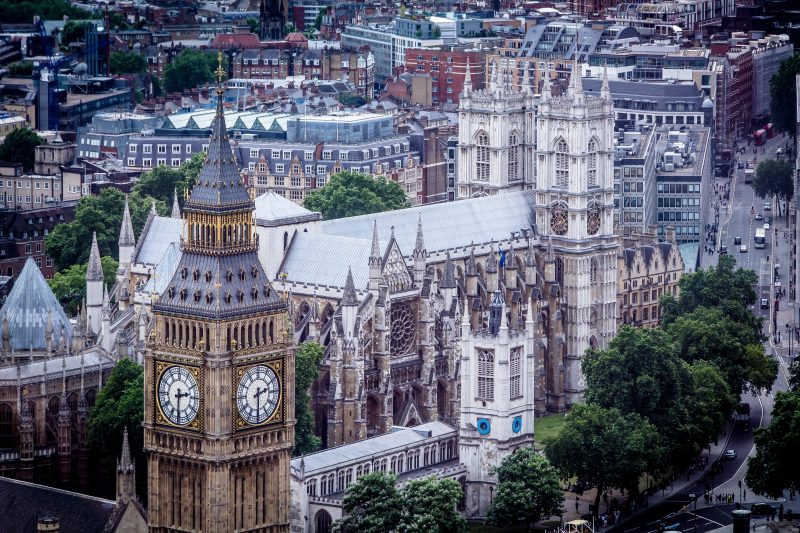