When should democracy be about consensus and when about conflict?

When should democracy be about consensus and when about conflict?

With the focus often being on party politics, elections, and individual policies, it’s easy to lose sight of the broader framework in which decision-making takes place. In looking at the democratic framework, a fundamental question arises: should democracy be about conflict – one’s values over another’s – or about consensus? George Vasilev explains that the two are not mutually exclusive and must, in fact, coexist: conflict is the very lifeblood of democracy, but this does not mean we should not be striving for a degree of consensus.

Without conflict, democracy loses its raison d’être. In a world where people see eye to eye on all matters, there is no need for a public exchange of reasons to determine the most justifiable policy, no need for vote counting, no need for political parties, lobbyists, and social movements, no need to seek the consent of the governed, no need to keep representatives accountable, and no need for protections from domination by the privileged and numerically superior.

All these democratic institutions, principles, and practices become superfluous. People are constantly sharing the same needs, policy preferences, values, and world-views. Such conformity renders meaningless a decision-making mechanism designed to ensure competition over interest maximisation and the good life remain egalitarian and inclusive. 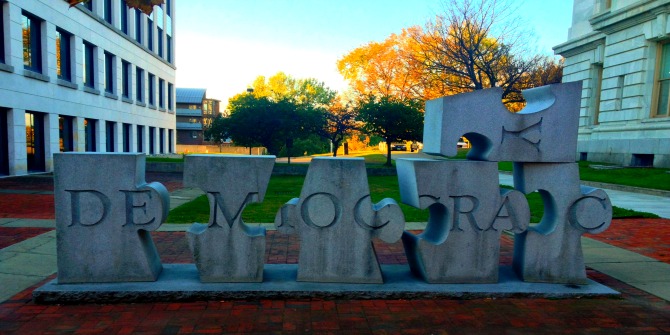 Marx and Engels famously envisioned such a conflict free world. They predicted that one day the government of people would give way to the administration of things, freeing us to hunt in the morning, fish in the afternoon, and criticise after dinner. However, even in Marx and Engels’ Communist utopia, such harmony in human relations is difficult to imagine. Resources can never be so abundant as to allow everyone to always attain what they desire. Differing values can never be so compatible as to always permit their unimpeded realisation.

Conditions of finitude and value-pluralism are an unavoidable feature of human life. Given this, incompatibilities over how to allocate goods and which idealisations to uphold ahead of others will always define the life of political communities.

If persistent disagreement characterises the social world, how should democratic engagement ideally ensue? Does the reality of conflict mean that democracy’s vitality is best ensured by encouraging citizens to encounter one another as adversaries, unconstrained in their political endeavours by an expectation that they aspire towards a common endpoint that is for all intents and purposes illusive?

For agonistic democrats, the answer is a resounding yes. In their view, the egalitarian and inclusive ethos of democracy is best secured by upholding disagreement as an end in itself and not treating it as a social pathology that must be overcome. As agonists see it, avoiding the closure of a consensus prevents the entrenchment of particular ideas, symbols and values as transcendent to the exclusion of others, which may also have a rightful place in society. To quote Chantal Mouffe, in an adversarial democracy ‘power relations are always being put into question and no victory can be final’.

This activity of constantly challenging a society’s guiding principles and warding off their concrete actualisation is deemed to open up the political arena to a broader sweep of standpoints and to serve as the very means through which citizens understand themselves as respected, free and equal. However, there are good reasons to be circumspect about this wholesale rejection of consensus-oriented politics while still appreciating the democratic value of adversarial engagement.

On the one hand, adversarial engagement serves democratic goals when it is adopted under conditions of domination, as disorderliness and civil disobedience may be the only way of inducing the social changes necessary for one to be treated as equal and free. Disruption calls to attention the unreasonableness of others, and can make it politically costly for them to continue excluding from politics those with a stake in the issue debated.

On the other hand, while disruptive and offensive behaviour to overcome domination is not immediately associated with the search for consensus, its ultimate aim is still to achieve the conditions that make consensus more likely. After all, those who engage in civil disobedience to overcome their political exclusion do so with the aim of engaging others in a project of explaining and justifying their positions. In other words, their ultimate aim is to kick-start a process of persuasion.

To the extent that this is so, both agonistic and consensually oriented politics come to the service of democracy. Yet, agonistic politics is not justified for its own sake, but for the sake of enabling a conversation that has the potential to lead to some level of agreement. Understood in these terms, a consensus-oriented politics has several advantages over non-teleological and adversarial modes of politics from the very egalitarian perspective emphasised by agonists.

First, the search for consensus is consistent with the just treatment of others. The process of reason-giving to reach a joint decision embodies a reflexiveness that is at the heart of what it means to be attentive to others. By anticipating agreement, even if it is never attained, people weighing each other’s views open themselves up to the possibility that a claim made by someone else has merit. Second, seeking consensus adds to the democratic legitimacy of agreements. An agreement approaches greater or lesser standards of democratic legitimacy depending on how participants have behaved toward one another in the course of reaching their joint decision.

Under these standards, an agreement arrived at through deceit, blackmail, and cunning is less legitimate than one arrived at through communication that is sincere, transparent, and other-regarding. In the former, people are being brought around to one’s position through manipulation. In the latter, they are consenting to that position as a result of being persuaded of its validity.

Insofar as the legitimacy of an agreement is dependent on the consent of its parties, legitimacy implies political efforts will be governed by consensus seeking behaviour, for in order to win another’s approval one must provide reasons they will find valid and accept voluntarily.

Finally, the search for consensus opens up the political terrain to social learning. Social learning refers to the educative impact of discursive interaction, whereby interlocutors learn something new as a result of placing themselves in each other’s shoes and reflecting on each other’s situations. This activity is tied to consensus-seeking intent, as ideal role taking implies entering an encounter with the conviction to discover something acceptable about one’s adversary.

Indeed, social learning and its beneficial side effects cannot emerge where behaviour is merely self-interested, as parties would not be seeking any insight into each other’s positions, or at least not seeking it beyond any tactical advantage it brings. Parties are not removing themselves from their own prejudices and pre-existing commitments in order to question them against the background of another’s. The intent to win is subordinating the intent to learn, producing dynamics hostile to the attainment of mutual understanding.

Just because complete consensus appears out of reach does not mean we should avoid aspiring towards consensus altogether. Conflict and coercion is everywhere, but so too is agreement and cooperation. Were this not true, there would be no foundation for constructive human relations and basis for aspiring to transform conflicts in positive ways.

Note: The above is based on the author’s journal article ‘The uneasy alliance between consensus and democracy’ (Review of Politics).

George Vasilev is a Lecturer in politics at La Trobe University, Australia. His research explores the application of deliberative democracy in the fields of conflict resolution, multiculturalism and transnational activism. He is author of the book Solidarity across Divides (Edinburgh University Press).