Dave Richards, Diane Coyle, Martin Smith, and Sam Warner explain why there is little that is novel in Gove and Cummings’s agenda for Whitehall reform. They argue that reformers would do well to consider why reform has been discussed for over 50 years but has yet to happen, and highlight that meaningful change will require Treasury reform.

The sage advice of the former permanent Secretary Richard Mottram to cabinet ministers is to resist the temptation to pronounce that the UK is ‘world-leading’ or ‘world-beating’ in its response to the current global pandemic. He could, of course, have extended this wisdom to include pronouncements about the armed forces, judiciary, policing, health service, parliamentary system and many other policy areas. Rarely, in an era of evidence based policy-making, are such claims empirically sustainable; and they partly reflect a tendency towards British exceptionalism.

Traditionally, Whitehall would be mentioned in similar terms, with the oft-invoked aphorism of it being a ‘Rolls-Royce like machine’. But no longer. The twin challenges presented both by Brexit and the unprecedented demands of responding to COVID-19 have seen a Conservative Government declare a ‘hard rain’ is about to fall on the civil service. This, counter-intuitively, from a party whose historical ideological mission is one of preserving the ‘great institutions of the state’.

Whitehall disharmony and calls for reform

Recent months have revealed a series of very public tensions across Whitehall. If we invoke Hirschman’s Exit, Voice and Loyalty, there appears to be little evidence of the latter lurking in the corridors of SW1 or their online counterparts. Conversely, both voice and exit loom large. We are in the midst of a series of high-profile, often rancorous, departures: the alleged sacking of Mark Sedwill as Cabinet Secretary; Phillip Putnam from the Home Office (currently suing for unfair dismissal); Richard Heaton from the Ministry of Justice; and Simon MacDonald being asked to step down from the Foreign Office preceding the contentious forthcoming merger with the International Development Office.

Following his blog last January, Dominic Cummings has been portrayed as being in the vanguard of a cathartic period of creative destructionism for Whitehall. Much of Cummings’s critique is founded on a view that the dominant Whitehall model that emerged from the Northcote-Trevelyan reforms is no longer fit for purpose. More recently, Michael Gove, the Cabinet Office minster with responsibility for civil service reform, sought to flesh out the government’s vision. Invoking Roosevelt’s New Deal, his calls for systemic, bottom-up reform were folded into a wide-ranging critique of Whitehall, arguing for: dispersing civil servants away from London; preferencing specialists over generalists; importing those comfortable with new digital technologies; policy-making informed by data-driven, complex modelling; an end to the merry-go-round of switching roles between departments; innovation through experimentation and risk-taking requiring, in turn, new forms of accountability; and the breaking down of departmental fiefdoms and silos.

Gove’s speech had undeniable appeal on many of these points. Yet, on closer inspection, it revealed a set of familiar responses to perennial challenges faced by the civil service. Those who have taken a broad brush, historical reading of the speech have traced the lineage of its ideas to the Fulton Report of 1968. Its analysis also highlighted overreliance on generalists, a lack of specialist knowledge, a dearth of problem-solving skills and the need for a renewed focus on training and managerial effectiveness. All remarkably similar to contemporary debates. The Thatcher and Major governments, too, sought to shake up the civil service through introducing a more ‘hands off’, streamlined, and managerial ethos, even if fundamental principles remained intact.

More recently, the picture has changed little. In 2004, Tony Blair spoke of shifting from policy advice to delivery and ‘outcomes’. He referred to the need for the civil service to become ‘more entrepreneurial’ and ‘adventurous’ with direct reference to the private sector. He worried about ‘inertia’ as ministers and civil servants feared the process of accountability, just like Gove. The language of strategic leadership, professional and specialist skills, innovation, and an interchange of ideas with ‘outsiders’ is the same. Pre-dating this, in 2000, the Cabinet Office was actively advocating training for ‘generalists’ and the integration of specialist skills – including operational research, social research, economics and statistics – into policymaking and monitoring.

But, despite the supposed radicalism of Maude’s speech, he acknowledged to the Public Administration Committee that he found ‘no fundamental problem’ with the civil service. Both he and the Cabinet Office favoured ‘incrementalism’ as the vehicle for reform, not the ‘radicalism’ favoured by the committee. And so, Maude’s 2012 Civil Service Reform Plan, despite its focus on ‘better skills, better technology and a mindset that revolves around the user, not the producer’, progressed slowly. The Cabinet Office’s report ‘One Year On’ points to familiar obstacles to reform associated with big organisations and sits well with the then Cabinet Secretary, Sir Jeremy Heywood’s assessment that the process would take between five and ten years. Will Gove and Cummings wait so long? A key issue, then, as noted by the Institute for Government back in 2012, is less about identifying the challenges, but rather maintaining the political will to see reform through.

One of Gove’s most intuitively persuasive (and unoriginal) arguments – the need for an emphasis on ‘hard, testable, data’ and the measurement of ‘outcomes’ – illustrates the point well. Major reforms directed at this very issue are underway. But, as part of our current research into the role of the Treasury, one former senior civil servant told us: ‘…while measuring outputs is hard, measuring outcomes is really really hard.’ As recently as December 2018, the Permanent Secretary at the Cabinet Office and the Director General of Public Spending at the Treasury argued that Single Departmental Plans and the new – or rather, born-again –  Public Value Framework, with its focus on outcomes and evidence of ‘public value’ beyond the raw numbers alone, was designed to improve deficiencies in this area. However, change and innovation was slow as (re)building the experience of the civil service and embedding ‘functional’ oversight of cross-cutting issues could not be achieved overnight. A recent National Audit Office report confirms that building (and retaining) a specialist workforce is no easy task.

A crucial piece of the jigsaw that appears to be missing from the Gove/Cummings vision is that of Treasury reform. Wider arguments for a more devolved, bottom-up approach, consistently rub-up against the fact that macro-economic policy requires some form of centralised control. As one former senior cabinet minister eloquently put it to us: ‘…the Treasury is the Ego of the national psyche and there is no nice reform that gets us round this.’ If real reform is to be realised and a meaningful break from the traditions [and pathologies] of the Whitehall model provided, then an alternative to the powerful, centralising, controlling force the Treasury holds over the rest of Whitehall is needed. But here, Gove’s critique is somewhat limited in ambition:

At the heart of our programme must be a focus on what works – what actually helps our fellow citizens to flourish. And that means, as I have emphasised, rigorous evaluation of Government programmes. What value do they add? What incentives do they provide for better performance and better service to others? The Treasury in the UK has been, historically, very good at questioning the cost of projects, but not their broader social value.

One aspect of this is the government’s confirmed review of the Green Book rules on investment programmes as part of its levelling up agenda. However, meaningful Whitehall reform is conterminously linked to the need for real fiscal devolution. Yet as the Kerslake Report noted: ‘…the UK system of spending control remains one of the most highly centralised in developed countries.’ As highlighted above, there is an established pattern of different governments rhetorically appealing to the need for greater devolution, but then baulking at the potential power give-away this might involve. The Treasury has been as guilty as any in all of this. This, then, has led to an approach that sustains a key element of the Whitehall model, that of central control to the detriment of a more pluralised, responsive, and devolved model of governance.

In a climate of uncertainty, the fear is that a set of re-centring tendencies have developed, with the Treasury continuing to seek to exert control over the fiefdoms it surveys. It is hard to imagine a reforming zeal can be sustained, when confronted by this dynamic within the civil service machine. If, therefore, there is little that is novel to be found in Gove and Cummings’s agenda, today’s reformers might do well to focus on why talk of reform has been continuous for over 50 years.

Note: the above piece draws on research for the Public Expenditure Planning and Control in Complex Times project, funded by The Nuffield Foundation.

Sam Warner is Researcher on Nuffield Foundation funded project Public Expenditure Planning and Control in Complex Times: A Study of Whitehall Departments’ Relationship to the Treasury (1993-Present), University of Manchester.

Photo by Karla Hernandez on Unsplash 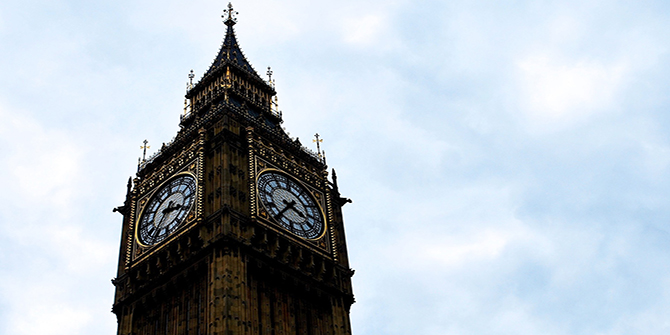