The government’s three month consultation on plans for English schools is now coming to a close. While the Green Paper contains a variety of policies, the most high-profile proposal has been that of restarting the expansion of grammar schools. Carl Cullinane explains why, despite the attention, expanding selection will not lead to more good school places.

The months since Theresa May first announced her plans to scrap the 1998 legislation banning the establishment of new grammar schools have seen a renewed and impassioned debate on academic selection in England. The government has indicated that new grammar schools are at the centre of their drive for more ‘good school places’ and greater social mobility. However, whether an expansion of selection is likely to lead to either of those goals is more questionable, given the evidence.

Just last week, the OECD launched their latest Programme for International Student Assessment (PISA) report comparing 15-year-old pupils across 75 countries. Ministers have argued that the PISA results show evidence in favour of selection, yet the report itself shows that not only is academic selection not associated with higher performance by disadvantaged pupils, the opposite may be true. As figure 2 demonstrates, selective systems are also shown to have bigger gaps between rich and poor pupils and thus greater inequality. The overall report concludes that all types of pupils benefit from less selection, not more. 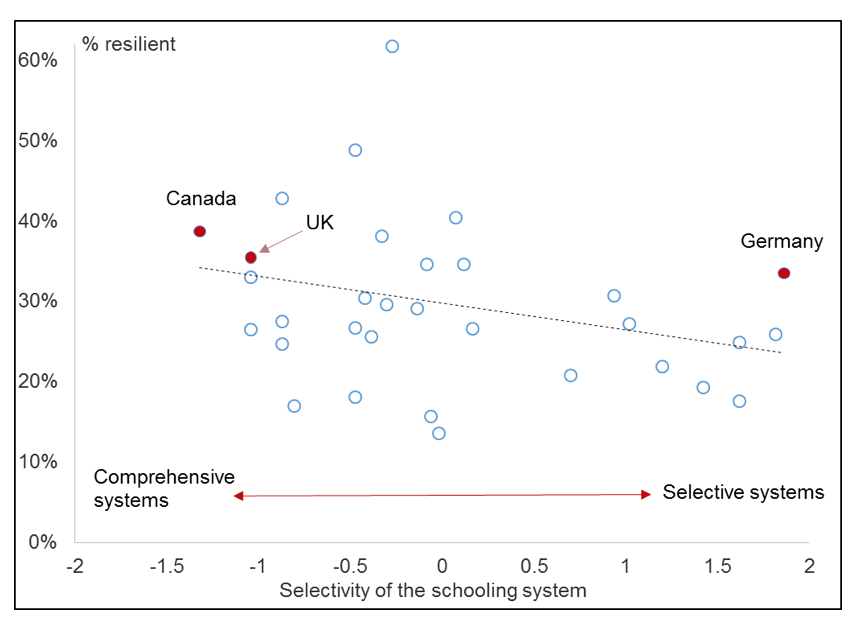 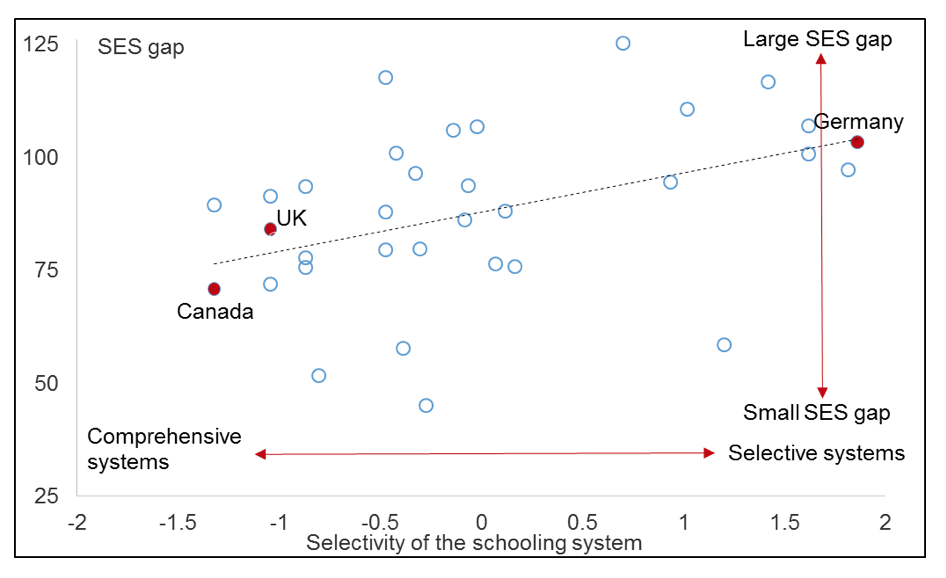 In England, the question of whether grammars facilitate social mobility is threefold: how many disadvantaged pupils get in to grammars, how do they fare when they do get in, and what effect does this have on children in non-selective schools.

Studies consistently show that grammar schools are not taking their fair share of disadvantaged pupils. Just 2.5 per cent of grammar school pupils are eligible for Free School Meals, compared to around 14 per cent in all secondary schools, and close to 20 per cent in grammar school catchment areas. The government however has suggested they wish to expand the focus from disadvantaged children, to include ‘just about managing’ families (the now ubiquitous JAMs), who, despite largely being in work, find themselves squeezed by increased housing costs, bills, and stagnating wages.

Grammar schools are framed as particularly helpful for the children of such groups. However, new Sutton Trust research indicates that the ‘just about managing’ also struggle to get into grammar schools, and are, in fact, not much more likely to attend grammar schools than the poorest families. Research combining Resolution Foundation work on JAMs and the Income Deprivation Affecting Children Index, shows that ‘just managing’ families tend to live in neighbourhoods in the bottom two categories in figure 3 below, which, outside London, shows a steep gradient in access to grammars across the socioeconomic spectrum. 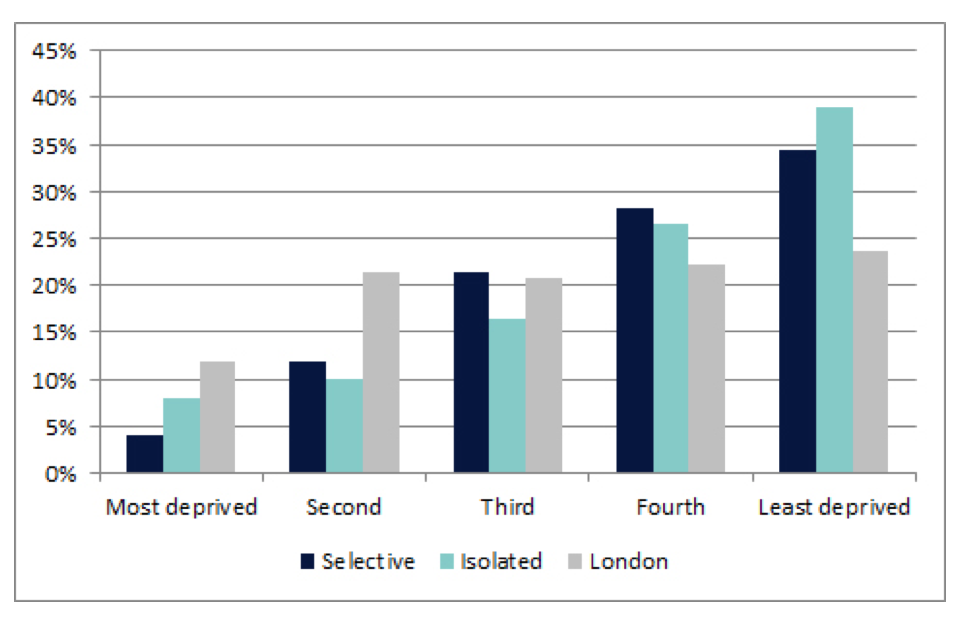 Living in a neighbourhood in the bottom two quintiles means pupils are substantially less likely to attend a grammar school. Importantly, multivariate analysis shows that this relationship holds even for non-disadvantaged pupils in those areas, and also controlling for prior attainment. This gives a strong indication that England’s grammars are not catering for JAMs.

While the King Edward VI schools in Birmingham have shown it’s possible to admit high proportions of disadvantaged pupils (up to 20 per cent) and Kent County Council has announced a willingness to move in that direction, other grammars have a long way to go in improving their intake of pupils from less advantaged backgrounds. 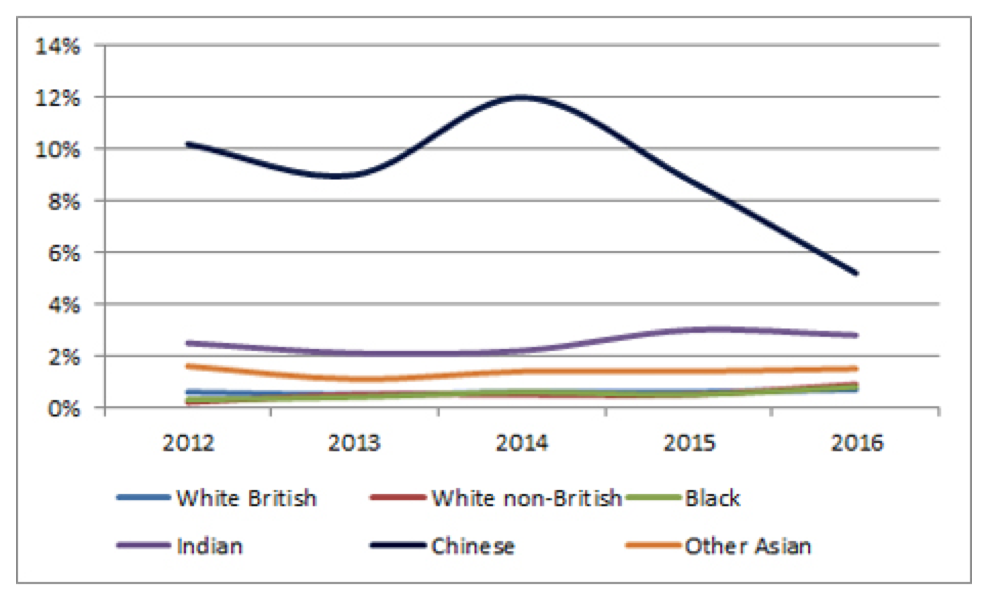 Parents and policymakers alike tend to be attracted to grammar schools because of their unquestionably high results. However, when you look more closely beyond the raw scores, this becomes significantly less clear. A variety of studies have shown that much of the advantage of grammar schools is explainable by the fact they admit pupils who are high achieving in the first place. This is true both for disadvantaged pupils and pupils as a whole. Expanding selection therefore has no guarantee that new grammar pupils will start performing better than they otherwise would. Figure 5 also shows that high attaining pupils do just as well at top comprehensives as they do at grammars, with 97 per cent of high attainers at top comprehensives achieving five good GCSEs, compared to 98 per cent in grammars. Finally, there is the vexed issue of the effect that grammars have on surrounding schools. The research is mixed on this issue, with a widely cited 2008 Sutton Trust report indicating that, in the country as a whole, there was no evidence that non-selective schools were negatively affected. However, recent indications are that, within the UK, areas with the highest concentrations of grammar schools have lower attainment in surrounding schools. Furthermore, this is particularly true for disadvantaged pupils, suggesting grammars may give with one hand and take away with the other.

It is therefore questionable whether increased selection would lead to more good school places overall, rather than to a concentration of previously high attaining students and high quality teachers in a small number of schools, with others suffering in comparison. Ministers rightly want to tackle the issue of low attendance of disadvantaged children at top universities. However, a better way to do this may be to boost the attainment and aspirations of highly able pupils across all comprehensives throughout their secondary education. The best candidates for support are not necessarily those that reveal themselves in the 11 plus.

Ultimately it’s clear that, despite the claims, grammars are no quick fix for England’s social mobility problems.

Note: A shorter version of this piece was published on the Sutton Trust blog.

Carl Cullinane is a Research Fellow at the Sutton Trust. He previously worked as a statistician in NatCen Social Research and as a researcher in Democratic Audit UK. Carl holds master’s degrees from Trinity College Dublin and the London School of Economics.