Recent coverage of the election from May2015.com has suggested that there are few scenarios in which the Conservatives are likely to be able to survive a vote of confidence, meaning that Ed Miliband has a good chance of become Prime Minister after May 7th. In this post, the team at electionforecast.co.uk argue that there is still a considerable degree of uncertainty surrounding the outcome of the election, and that there is almost an equal probability that the left- and right-blocs of parties will win a majority of seats.

Our latest forecasts suggest that the Labour party has just a 38% probability of being the largest party on May 8th. However, holding a plurality of seats is not essential for any party to form a government after the election. The crucial number on May 8th will be 323 – the number of legislators required for a government to avoid losing a vote of confidence in the House of Commons. In a recent post, the team at May2015.com argued that Ed Miliband is in a very strong position to become Prime Minister after May 7th. Saving a late (and large) shift in the polls, they argue that “the election maths clearly favours Labour. All the outcomes currently implied by the polls or predicted by forecasters put them in a superior position.”

The question May2015 pose is whether there will be an anti-Tory bloc of parties with at least 323 seats. This is a good question. If left and centre-left parties account for over half the seats in Parliament, it would indeed be very difficult for Cameron to remain Prime Minister. The crux of the May2015 argument is that Miliband will have an easier time constructing a coalition of 323 MPs than will David Cameron. At face value, this seems reasonable: Labour could plausibly rely on the support of the SNP, the Greens, Plaid Cymru, and the SDLP. The Conservatives, by contrast, are likely only to be able to count on the support of UKIP, the DUP, and the Liberal Democrats.

There is indeed an asymmetry between Labour and the Conservatives in terms of coalition building, and we agree that having a larger number of potential coalition partners gives Labour an advantage in terms of post-election negotiations, particularly if the two parties are very close to parity with one another. In a previous post we argued that “conditional on being the largest party, the Conservatives are likely to face a tougher bargaining scenario than Labour.

However, we are not convinced that there is currently sufficient evidence to conclude that Ed Miliband is significantly more likely than David Cameron to be able to put together a group of 323 like-minded legislators on May 8th. May2015 walk through a number of plausible scenarios, based on current polls and forecasts (including our own), and conclude in each case that it is easier for the Labour leader to reach 323 than it is for the Conservative leader. However, when forecasting elections – and this election in particular – it is important to account for the considerable degree of uncertainty that remains in the weeks and days leading up to election day. We think that there is a good deal more uncertainty about the outcome in this election than suggested by May2015.

All election forecasts are associated with a significant degree of uncertainty. The table below gives the forecast seat shares of Labour and the Conservatives from our own model (21st April), Elections Etc (17th April), and the Polling Observatory (17th April). The mean predictions are generally similar, but each forecast incorporates a large degree of uncertainty as indicated by the upper and lower prediction intervals. 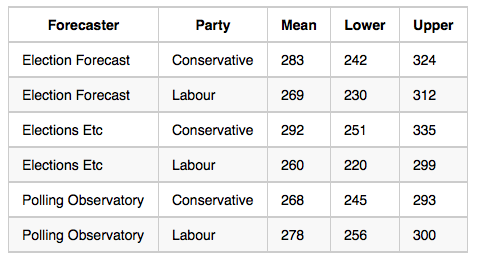 At least in our model, much of the uncertainty in these predictions comes from the fact that even immediately before election day, general election polls in the UK have not been very accurate. In 2010, the average of the election-day polls missed party vote shares by as much as 4 percentage points. A consequence of this is that even on May 6th, we will have substantial uncertainty in our estimates. We are not being ambivalent or non-committal by incorporating this uncertainty into our forecasts; we are being honest about how informative the polls have been historically.

Characterising uncertainty is important because it allows us to put probability statements on different events. This includes the probability of a Labour or Conservative plurality, and the probability of whether either a left- or right-bloc of parties will win more than 323 seats. By specifying a model that accounts for the uncertainty in the election result, both at the level of seat-specific swings and national swings, we can simulate a large number of plausible election outcomes. For each simulation we can record the distribution of legislative seats. As we have emphasised in this post, there is significant uncertainty in the specific outcome of the election, and thus there is considerable variation in the results that we record from each simulation. We can, however, use the distribution of these simulated results to work out how probable each outcome is.

After simulating the election thousands of times, resulting in many different distributions of legislative seats, we can then add up how often the right- and left-blocs of parties reach the 323-seat threshold, and use this to calculate probabilities. Our primary focus here is on whether the Conservatives are able to make the coalition math work. Thus, while one could debate the membership of these blocs (at least the Liberal Democrats and probably the DUP could support either major party) for illustrative purposes, and following May2015’s example, we use Labour, the SNP, the Greens and the SDLP as the left bloc and the Conservatives, the Lib Dems, UKIP and the DUP, the UUP and Alliance as the right bloc. The graph below indicates the probability that each bloc will constitute an effective majority of seats after May 7th. 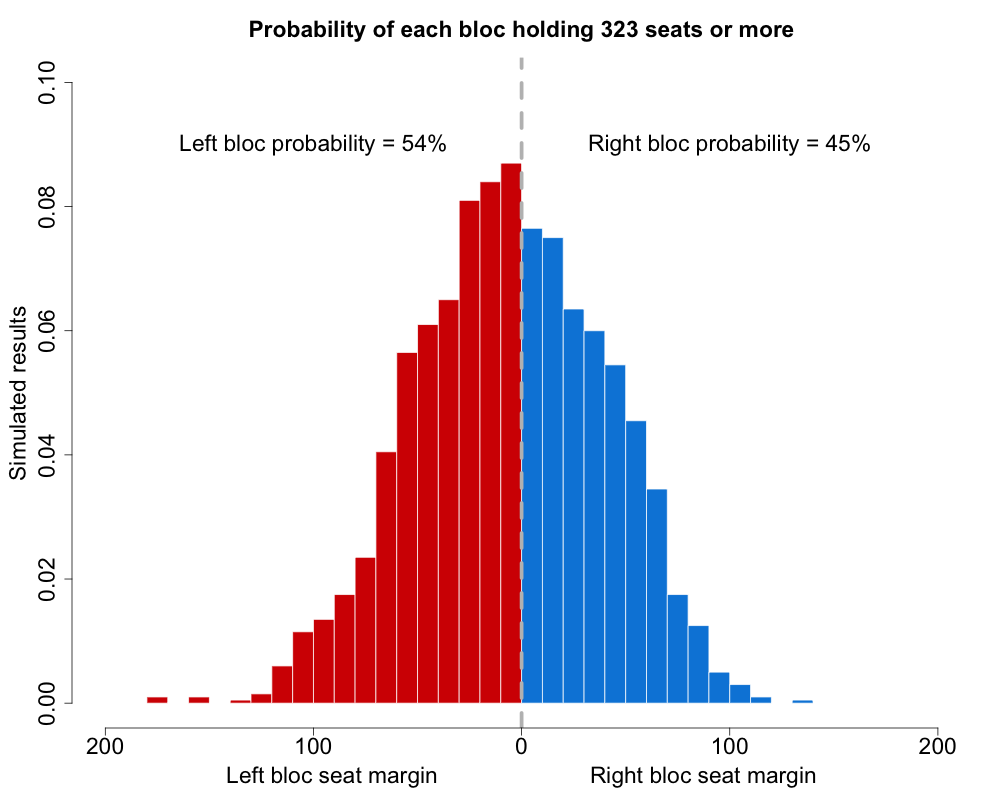 The important thing to take from this plot is that it is in the context of a simulation where 38% of results put Labour ahead of the Tories on seats. When we shift consideration to these left and right blocs of parties, those same simulations put the left bloc ahead in 54% of results. This does reflect the kind of advantage that we have previously written about and that May2015 has emphasized, but it also makes clear that this difference is not especially large compared to our aggregate uncertainty about the election. In 16% of simulated elections Labour has fewer seats than the Conservatives, but the left bloc could vote out a Conservative-led government. This is non-trivial, but it is also not so large that it is fair to say that Labour’s position is very strong. (The missing 1% in the plot comes from the simulated results where both blocs end up on 322 seats, with the speaker and Sinn Fein MPs making up the difference.)

Why do our predictions differ from the story told on May2015? One reason is that, as we explained above, we assume that there is a significant degree of uncertainty in the election, despite the static polls and similar headline seat forecasts. A lot of the remaining uncertainty is highly correlated across constituencies. It takes only a modest national swing from the current polling averages to make the math line up for Cameron. And by a modest swing, we mean not very large compared to historical movements of polls in the final weeks and compared to the historical misses of the national polls on election day.

In short, we agree wholeheartedly with May2015 that if the election were to result in the types of seat distributions that they discuss, Miliband would stand a very good chance of becoming the next Prime Minister. However, there remains a great deal of uncertainty about final seat outcomes, despite the fact that most of the forecasts are displaying similar headline predictions. Just as we shouldn’t interpret individual polls without considering the uncertainty with which they are associated, neither should we take headline forecast numbers in isolation from their associated uncertainty. Given this uncertainty, our model suggests that there is almost an equal probability that the left- and right-blocs of parties will pass the 323-seat threshold.