Although we are not yet on the cusp of a ‘post-human’ society, the prospect of automation still poses significant challenges, including the potential shift of national income from labour to capital. Carys Roberts explains why public policy should seek to accelerate automation to reap the productivity benefits that come with it, but do so while building new institutions to ensure the dividends are broadly shared.

‘Will a robot take our jobs?’ has been a common question in the media. The threat of mass joblessness has even given rise to debates on the merits and drawbacks of a post-work society. But while debates have focussed on work, less attention has been paid to the other side of the coin: profit.

This is an oversight, because automation could cause the transfer of large amounts of national income from labour (in wages) to capital (in profits), as income from tech-generated growth flows primarily to owners of capital. Such an increase in the capital income share could occur for a variety of reasons. Aggregate wages will be reduced if workers are substituted for technology without new jobs of equivalent worth in aggregate wages being created elsewhere in the economy. It could also occur if wages are pushed down due to surplus of labour reducing bargaining power following automation. The capital income share will also increase if new economic growth is less labour-intensive than before, as a result of new technologies. It is notable, for example, how many of the new ‘superstar’ tech firms have relatively few employees, generating (or expecting to generate) their profits largely from their technology, algorithms, and data.

A fall in the labour income share would not be in itself a problem, if capital were fairly shared across society. Yet that is not the case in the UK, where the wealthiest 10% of households own almost 70% of all financial wealth. A rising capital income share is therefore likely to increase inequality.

How much income could be transferred to capital? A new IPPR report finds that jobs with the technical potential to be automated are associated with £290bn of wages per annum. This represents 33% of all wages and earnings in the 2017 UK economy (see the report Appendix for our methodology). However, this does not mean that we should expect £290bn to be transferred to capital. Firstly, it is unlikely that all of these jobs will be automated in the short to medium term, though they may be in the long term. Technical potential for automation is a necessary but not sufficient factor for the automation of jobs; economic, regulatory, and ethical factors are also critical. Firms will only choose to automate tasks when the cost of doing so is less than the cost (financial and other) of employing workers to perform the same tasks. These are significant barriers to adoption. In fact, the UK lags behind other countries in terms of investment in technology and productivity increases, so at current rates, we are a long way from mass automation.

But even in the event that all of the jobs associated with these wages were automated, it is infeasible that all of this would be transferred to capital. The adoption of technology creates jobs in the development, installation, and maintenance of machines and software. Wages are likely to rise in occupations that are complemented by technology as productivity increases, which would offset some of the ‘lost’ wages. New employment will be created, either in the automating sector as demand responds to falling prices, and/or in other sectors as falling prices create an income effect. For example, Amazon has simultaneously expanded its workforce while hugely increasing its use of robotics, because demand for Amazon’s products has increased – the result of the lower prices it is able to charge due its use of technology and expanded output.

And yet complacency would also be the wrong approach. Many of the barriers that prevent the adoption of automating technologies today will eventually be overcome, as the acceptability of technology increases and costs fall relative to labour. This could result in significant automation, and across a broader range of skills, tasks and occupations than in previous waves of technological change, especially in the long-term. There will be frictions that mean people are not able to shift seamlessly into new jobs, as well as winners and losers by region, gender, and generation. Workers in occupations more technically susceptible to automation are less likely to have skilled qualifications or to live in areas where new jobs are being created – meaning they may not find new work. If wages continue to rise more slowly than GDP, new employment could be created in low-pay work in which employees or insecure workers are cheaper than machines, rather than at equivalent aggregate wages to those jobs lost. So empirically, while we would not expect all of £290 billion to be transferred to capital in profits, we should expect some portion of this to do so. The OECD has shown that over the last four decades, at least half of the decline in the labour share in advanced economies has been due to technological change.

We’re not yet on the cusp of a ‘post-human’ society, but the prospect of automation still poses significant economic and political challenges. Not least of these is the potential shift of national income from labour to capital. Policymakers must be ahead of the curve in anticipating these changes, and design policy to make sure automation works for everyone in society. Options on the table should include ensuring all sectors and areas invest in and benefit from technology that raises productivity, reforming the skills system to make sure good jobs that are created are accessible to all, strengthening trade unions to enable workers to bargain their wages upwards, and spreading capital ownership so that returns to capital benefit everyone in the economy.

Note: the above draws on the recently-published IPPR paper ‘Managing automation: Employment, inequality and ethics in the digital age‘.

Carys Roberts is a Research Fellow at IPPR. She tweets @carysroberts. 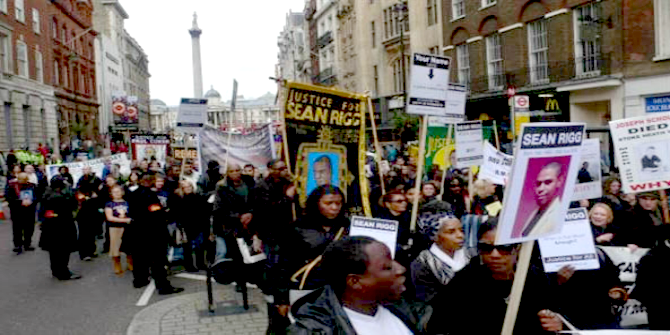