The blogs are at it today, along with comment in some newspapers and on radio and TV, that – shock horror – only 51 per cent of the electorate say they find the election interesting, according to the findings of YouGov’s poll today. Another 43 per cent said they found it boring.

I was surprised that it was so many, rather than so few. To put it into some context, some six in ten people have for years said they are interested in politics, and four in ten are not, as was demonstrated on my ‘Interest’ blog several days ago on this website.  So that’s consistent.

Let’s see what it is somewhat closer to the 6th of May.

Hopefully YouGov will ask this question from time to time during the election so we have a track on interest, and see what impact the debates have on it.  I suspect that the first debate, from Manchester on 15 April, chaired by the excellent Alistair Stewart, will have a massive audience at the start.  How many people will be watching by the end of the 90 minutes is another question. The first debate will not be like party election broadcasts or Prime Minister’s Question Time.  They are turnoffs; the debates, at least the first one, will be a turn on. 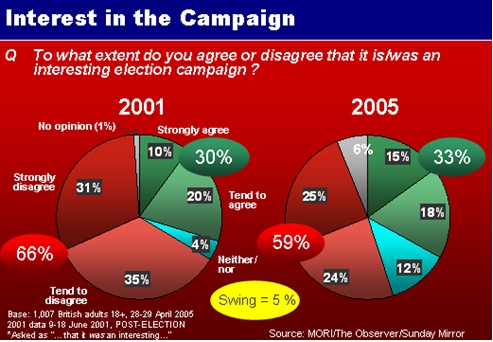 In every one of the 11 general elections I have been polling, bored news editors, running out of ideas of what to report next, have sent film crews and reporters out to do vox pops on what a boring election this is.  And with 40 per cent uninterested in politics, it’s hardly surprising that they find some people to say how bored they are.

As the YouGov finding shows however, they do not represent the majority of the electorate at the start of the campaign. Now let’s see if the debates raise interest, or after four and a half hours of them, they (and the rest of the campaign coverage) has worn us all down.