In an evocative account, Dr Edward Ademolu recalls his experience as a young black man growing up in largely white Catholic community in South London and how unrepresentative and distant worship practices led to a disconnect between him and Catholicism. Later attending different Afro-black churches, racially inclusive and vibrant in worship, Edward came to perceive a racialised Christianity and the complex intersection of race and spirituality.

Try as I might, I can’t rid myself of my Catholic church upbringing.

As if yesterday, I still remember the kaleidoscopic-hues on a cross-mounted, ivory-porcelain Jesus – speckled through muddied stained-glass windows like skittles in milk. Or my contorted Maori-Haka face whenever I received the stale Styrofoam – you know, the consecrated bread? – Which fizzled like skips on my tongue. So too, wincing at the sourness of Jesus’s blood-cum-mulled wine during Eucharist whilst convincing myself of its sweetness – as all things divine were inherently honeyed. Right? What about the swan-like glide and posturing of white-cloth enrobed altar boys whose subdued showmanship and quiet importance frustrated the unarticulated thespian in me. And who can forget the Saturday morning graveyard-backed jumble sale? Selling everything from S-Club 7 cassettes and Jane Fonda workout DVDs, to Woolworth Crayola colouring books and devotional poetry, all for shaven-headed kids in a Malawian village somewhere. Oh, and lets not leave out the Advent symbolisms of jelly-tot skewered clementines (if you know, you know). What stood out the most however was the atmospheric frugality of Catholicism, its risk-aversive rationing in ceremonial worship, an atmosphere which incubated an icy-stillness, a certain kind of sterile-familiarity that steadied the unnerved current of its ecclesiastical heartbeat.

While these archived memories – which are not too distant – were fond, and doused in syrupy nectar, once in a while – okay many times – there was a certain tartness that caused even the most fully-fleshed of lips to retreat to base and form the skin of prunes. That is, the lack of black-and-brown congregational representation in this very white-euro-centred, led and performed space, which was off-putting and self-conscious-raising. The Catholic church (at least in England) as a micro-level sacred space, reflected my tokenistic black-self in the wider macro-level world. Apart from the few mahoganied regulars who were mostly middle-to-elderly-aged Igbo-Nigerian, Congolese and Ghanaian women – or the odd biannually-invited, exchange priest from Goa – no one looked like me. Whether that was because of the catchment area – oh wait it was in South London, couldn’t have been that – or maybe perhaps the Catholic churches dwindling appeal for black Christians? I don’t know. What I do know however is that its obsession with sacraments and ceremonial observations such as parishioner-to-priest confession and the veneration of the Virgin Mary, was for me, a blockage to seeking God. These preoccupations were simply theatrical intermediaries – mere religious and theological symbolisms of white noise – that interfered with me hearing God clearly and reaching out to him with certainty.

While its rather problematic to assume a certain instinctual bond, intimacy or style of worship that black people of faith have with God – I for one felt that the Catholic church was incompatible with my ethno-intuitive expectations for pursuing and ‘knowing about’ God. I had to venture outward – beyond the pew mats and frayed cinctures of St. Matthews. And that I did.

During my time at sixth-form and university, I attended – and was invited to – many different Pentecostal, Charismatic, Evangelical and Afro-Celestial churches. Within those walls there was a different kind of evaluation of religiosity – a hitherto unknown criteria of faith, as interpreted through various ethno-symbolic performances of an Afro-black(ened) Christianity. There, faith-through-blackness or blackness-through-faith was in full-brim abundance, centre-staged and solidly-anchored in its visibility. Yet there was also an inclusivity to this sanctified blackness which was enjoyed by all races, ethnicities and nationalities. Whereas in the absence of black figures in the Catholic church, my blackness sought, and found companionship with the smoky frankincense of its aisle.

This all-inclusive buffet of faith made me racialise Christianity in a way that I hadn’t before. But this was just the tip of the iceberg. These churches with all their vim, vigour and spontaneity defied liturgical bureaucracy and ceremonial protocol. Unlike the Catholic church of my youth, when in worship, bodies weren’t contoured into praying mantises, nor did they rehearse the call-and-response of the Lord’s Prayer or absentmindedly roll the rosary between finger and thumb. Rather I saw dewy-faces with arms raised high, and fingers splayed – as if reaching for God’s heal. So too, the very real, yet disembodied-paralytic figures, – wafting through bodily heat, and which were possessed by the hypnotisms of Afro-percussionist melody and rhythms. I heard the harmonically-riotous shouting, hollering and whooping of transcendental praise along to the latest offerings of gospel and contemporary Christian music. Compare this to my uninitiated Catholic lips which were used to mouthing the words – operatically – to “All Things Bright and Beautiful” – in bouncing-ball karaoke formation. There was a real sense of urgency, an instantiation within these churches, without delayed-gratification. For them salvation, spiritualism and intimate approximation to the “Most High” were currencies with a time-limited purchase as such, warranted a devotion that was Duracell-charged in excess and tamed-vulgarity.

While, this style of worship was foreign to me – sometimes peculiar – and often Nollywood-film agitating, its inclusive representation, seemingly-intuitive-driven closeness to a fully-present, “here and now” God was infectious, comforting and reassuring. I can’t say I’m a fully-fledged member of either or any of these newly-found churches. Yet as a person of faith what I know is, while visibility of one’s self as seen through others is not a prerequisite for identifying as a Christian, following Christ or having a fruit-full faith, it does however set (or contribute to setting) the tone, pace, style and rhythmic-barometer of religious performativity. As Black representation– even in churches – matters.

Note: This article was originally published by Religion in Public. 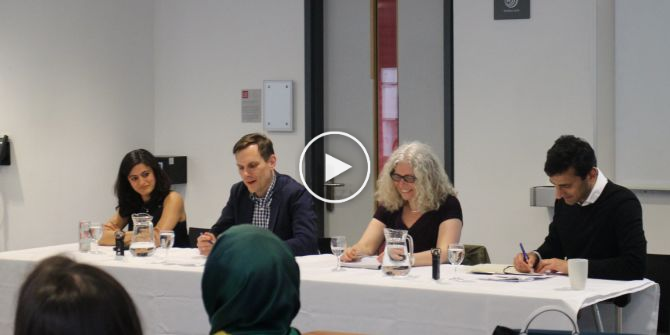