What is the global picture of impositions on religious freedom? In this summary, Samirah Majumdar outlines how restrictions have been rising across the world. This includes both government-sanctioned curtailment of religious liberty and social hostility towards religious minorities. Europe has seen some of the biggest increases over the decade.

Every year, Pew Research Center produces a report on religious restrictions that measures the extent to which governments and societies impinge on religious beliefs and practices around the world. The study has been conducted since 2007, with the latest report covering data from 2007 to 2017.

From a global perspective, the decade of data shows overall restrictions on religion are not at very high levels – in 2017, the global median score for government restrictions was 2.8 out of 10 (from 1.8 in 2007) and for social hostilities it was 2.1 out of 10 (from 1.0 in 2007) – but they have increased over time. When you look further at the data regionally and by type of restriction, there are more variations. Religious restrictions have been rising, but not evenly across all geographic regions or all kinds of restrictions. 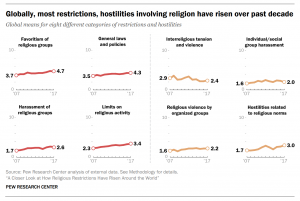 Government limits on religious activity, which can include efforts to restrict proselytizing, preaching, interferences in worship and limits on religious dress, have particularly been on the rise in the past decade. The global score in this category rose by more than 44% between 2007 and 2017. Europe’s score in this category has doubled since 2007 – the biggest increase in any region over the course of the study. A growing number of European countries having been placing restrictions on religious dress, which can range from prohibitions on wearing religious symbols or clothing in photographs for official documents or in public service jobs to national bans on religious dress in public spaces. In 2007, five countries were reported to have such restrictions in Europe, but, by 2017, that number had increased to 20 countries. For example, Spain has experienced some of the largest increases in its score for this type of restriction since 2007. In 2010, several cities in Catalonia introduced bans on full-body and head coverings as well as face-covering veils in public buildings.

Sub-Saharan Africa also has seen a notable increase in governments limiting religious activity. In 2015, four governments introduced bans on Islamic veils in response to terror attacks within their borders. However, Islamic veils aren’t the only type of religious symbol that gets captured in this category. In Malawi, for example, it was reported that some children who follow the Rastafarian faith were prohibited from attending school if they had dreadlocks.

Limits on religious activities also have been rising markedly in the Americas, particularly with government interference in worship. The number of countries where governments interfered with worship rose from 16 in 2007 to 28 in 2017. For example, in Canada, a supreme court decision denied protection to a territory of spiritual significance to an indigenous group. The group had sought a judicial review of a decision to approve building a ski resort on land that was central to their faith, claiming that it would impinge on their religious practices and violate their religious freedom. And in 2016 in Paraguay, an indigenous group was evicted from their ancestral lands and police destroyed their homes and places of worship.

When looking at acts carried out by private individuals or social groups, hostilities related to religious norms have risen substantially – the global score in this category rose by 79%. This includes instances of individuals being assaulted for expressing religious beliefs that go against the majority faith in a country, harassment for violating dress codes and hostilities over proselytizing or conversion.

The largest increase in this category of hostilities related to religious norms occurred in Europe, where there was a particular increase in assaults on individuals for religious expression considered offensive or threatening to the majority faith. In 2007, six European countries were reported to have such hostilities; by 2017, that number had climbed to 25 (out of 45 total countries in Europe). In Belgium, a rabbi reported in 2016 that stones were thrown at him and a friend because he was “visibly Jewish.” The previous year, a young Jewish man wearing a yarmulke was assaulted by two men. And in a separate incident, a Muslim woman was attacked by two women who took off her veil and verbally abused her for being Muslim.

In sub-Saharan Africa, there has been a notable rise in hostilities over conversions. In 2007, five countries in sub-Saharan Africa experienced such hostilities; by 2017, that number doubled, to 10 countries. In Djibouti, for instance, Christian groups reported that Christian converts faced discrimination in employment and education. And in Nigeria, girls abducted by the terrorist group Boko Haram were subjected to forced religious conversion and other abuses.

Overall, from a regional standpoint, the level of restrictions started high in the Middle East-North Africa region, and is now highest there in all eight categories measured by the study. But some of the biggest increases over the last decade have been in other regions, including Europe – where growing numbers of governments have been placing limits on Muslim women’s dress – and sub-Saharan Africa, where some groups have tried to impose their religious norms on others through kidnappings and forced conversions.

For more information on this Pew Research Center study, see the report and methodology.

Note: If you wish to re-publish this article please contact faithcentre.rgs@lse.ac.uk