Matthew, Mark, Luke, John…and Me, written by Arthur Ullian, explores growing up Jewish in mid-twentieth century America. In this review, Dr Austin Tiffany of the Religion and Global Society Unit reflects on the book and what it means for interfaith relations in America. 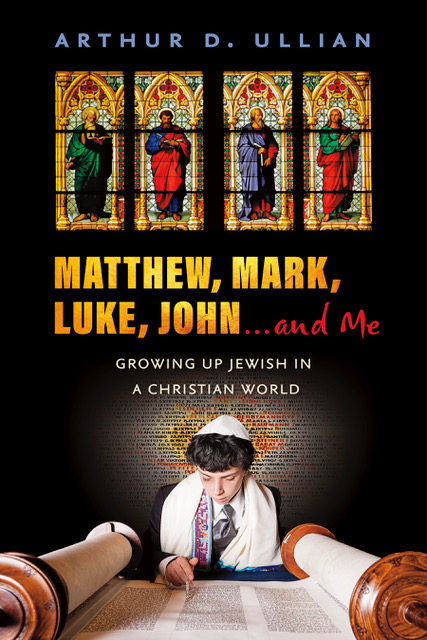 Arthur Ullian’s book Matthew, Mark, Luke, John…and Me provides an honest and in-depth account of growing up as a religious minority in the United States. Personally, as an American, the book beckons those within the majority – Christians, of which I am a researcher and practitioner of – to reflect on our theology, art, and daily life.

In the book, Ullian provides an overview of Jewish life from the time of Christ to the present day, describing the cultures, laws, and beliefs of Christian Europe that made life insufferable for Jewish communities throughout time. Ullian discusses timeless pieces of literature and famous paintings that Christians would not blink an eye at yet are filled with antisemitic tropes. He cites Shakespeare’s The Merchant of Venice as one such piece, as well as religious art, such as the paintings of Giotto, and statues in our cathedrals. To someone from the Jewish community these works of art represent brutal discrimination, misinformation, and scapegoating of the Jewish people. Ullian’s personal reflections on the matter makes history more tangible by pointing out that for too long, Christianity’s approach to other faiths was built upon this legacy of suppression and discrimination.

Where as a nation or a church, it is always difficult to come to terms with one’s past. The relegating of difficult histories to the textbooks often feels like the safest thing to do. The brilliance of Ullian’s book is the way in which it carries these shameful histories of antisemitism and discrimination into the present day as he reflects on his life. The antisemitism in twentieth century America does not equate to the expulsion and death of Jews during the Inquisition or Black Death, but Ullian does not suggest it does. Instead, he communicates the quiet yet explicit exclusion from social clubs, parties, and the overarching protestant culture of New England in the 1940s and 50s; he describes the pain and confusion of this alienation on a young boy and family who wanted part of the American Dream, only to be excluded because of their religious heritage.

Even as the United States would make slow progress towards religious tolerance throughout his life, Ullian recalls dinner conversations about Adolf Hitler’s rise to power in Germany and, eventually, the horrors of the Holocaust revealed during the Nuremburg Trials. It serves as a harrowing reminder that this dark, antisemitic chapter in history is still well within recent memory.

Throughout the book, readers frequently witness Ullian’s frustration with a Christianity that has sought to undermine, and at time disprove, his religious heritage. He recalls the forced chapel services of his childhood, where preachers would explicitly and forcefully blame the Jews for Christ’s death, words that would bring guilt and embarrassment on Ullian. Later in life, through his studies of Christian scriptures and visits to Europe, he learns the stories and tragedies of Jewish communities throughout the continent and across time.

Yet, as the book traces Ullian’s life, readers learn of his cycling accident and subsequent quadriplegia. It is here that the book shifts, taking a turn from bitterness and frustration to one of repair. At this point, Ullian cites tikkun olam – a Jewish phrase meaning “repair of the world” – in his quest to advocate for medical research in Washington, DC. “When you lose everything,” Ullian writes, “your priorities can’t help but change”.

While Ullian’s accident and quest to repair the world may seem removed from his experience as a Jew in America, it beautifully echoes his desire for a repaired relationship between Christianity and Judaism.

Ullian does not provide specific suggestions on what Christians should do to help repair a world marked by the exclusion and discrimination of religious minorities. He does not propose a five step plan to heal broken relationships nor restore justice to those who have been wronged. Instead, Ullian asks that Christians do “more than just pay lip service to asking for forgiveness”. Formulating a solution is not the responsibility of Ullian, nor should it fall solely on the shoulders of the religious minority. Instead, the book concludes with an implicit, yet clear, call for the Christian church to partake in their own tikkun olam.

Christian churches have come a long way in repairing their relationship with Judaism since Ullian’s school days. The author notes the progress made through the Church of England’s recent report titled “God’s Unfailing Word: Theological & Practical Perspectives on Jewish-Christian Relations”. Outside of the Church of England, we can also see signs of progress through Nostra Aetate in 1965, the Catholic Church’s recent document titled The Gifts and Calling of God are Irrevocable, and Pope Francis’s most recent encyclical, Fratelli Tutti, which powerfully speaks to interfaith work and reconciliation. In addition to the Anglican and Catholic churches, other Christian denominations have also taken strides in repairing Christian-Jewish relations, including the Alliance of Baptists and the Presbyterian Church (USA), among others.

Ullian’s book serves as a reminder that reports, statements, and teachings are not enough – this reconciliation of thought and deed must permeate all levels of religious life. I am personally reminded of a course I used to teach for Anglican theological students on Christian-Jewish relations. As part of the discussion around creating a welcoming environment for non-Christians in church services, we examined the liturgical texts of Holy Week, which Ullian frequently discusses in his book. A Jewish colleague of mine would read portions of the text, which illuminated how easily the text could be misconstrued and become anti-Jewish. Ullian’s memories of anti-Jewish sermons compels Christians to develop better interfaith training for our clergy and communicate our Biblical texts in a more sensitive, open, and inclusive way.

This task is not left entirely to churches and their leaders, however, but also the social and educational spaces throughout society. Ullian remarks about inclusive and accepting spaces he found throughout his life, such as LSE. Diverse and welcoming contexts that are not syncretistic but rather stimulate vibrant discussion and foster an inclusive atmosphere can be replicated at schools, universities, and community groups.

Finally, all of these structures – churches, schools, and local communities – are made of up individuals. As Ullian writes in his never-delivered address to his classmates, the antisemitism and religious exclusion described throughout his book seemed to be “very much at odds with the kindness you all showed me then and still show me today. In fact, it seems apparent to me that all of my non-Jewish friends and colleagues live their lives according to the values that Jesus expressed in his Sermon on the Mount”. Each of us, as individuals, have a role to play in reaching out to the neighbour, welcoming difference, and creating a harmonious community in which all can thrive and belong. Whether you call it the American dream, the values of the Sermon on the Mount, or tikkun olam, we as individuals and the structures in which we inhabit have an obligation to welcome everyone and foster a community of justice and inclusion.

Dr Austin Tiffany is the Project Manager in LSE's Religion and Global Society Unit. Through his experience at LSE, the University of Cambridge, and the charity sector, Austin's research interests include religious diversity and the impact of this diversity on society, having worked and studied in the US, UK, and Middle East.

Posted In: International | religion and identity