As the world continues to fight the pandemic, the threat of climate change looms large. For years, religious leaders around the world have advocated for better care of the planet. But the relationship between religion and the environment is not simply one of advocacy. In this post, originally published by the Earth Institute at Columbia University, Professor Vegard Skirbekk, Dr Alexander de Sherbinin and Dr Susana Adamo discuss how religion relates to contemporary environmental challenges.

As a marker of identity that transcends national borders, religion influences many environmentally relevant behaviors. Thus, understanding its role is key to tackling environmental challenges that are fundamentally transnational.

Previous research has found that religion influences many aspects of lifestyle that affect the environment. These include childbearing decisions and the use of contraceptives (and resulting effects on population growth); risk behaviors and use of health services (which affect life expectancy); whether people see climatic change as human-caused, or related to forces beyond human control; consumption patterns, and thereby use of natural resources and emissions of greenhouse gases; and willingness to take actions to abate environmental degradation.

We have investigated the link between environmental challenges and religion in a new study in the Journal of Religion and Demography. The work builds on a growing body of research carried out at the Center for International Earth Science Information Network and the Columbia Aging Center. We looked at the environment-religion relationship by analyzing religious affiliation together with a variety of environment and climate change-related indicators at the country level. We also conducted exploratory and descriptive statistical analyses to better understand the associations among religion on one hand, and economic development, greenhouse gas emissions and exposure to environmental stressors on the other.

Basically, we found that nations whose inhabitants are less religious tend to use more resources and produce more emissions; yet, they are also better prepared to deal with resulting environmental challenges, because they are wealthier. On the other hand, nations whose populations are more religious tend to use fewer resources; yet at the same time, they have less capacity to meet environmental challenges, and are subject to more adverse outcomes, in part due to their high levels of poverty and continuing population growth. 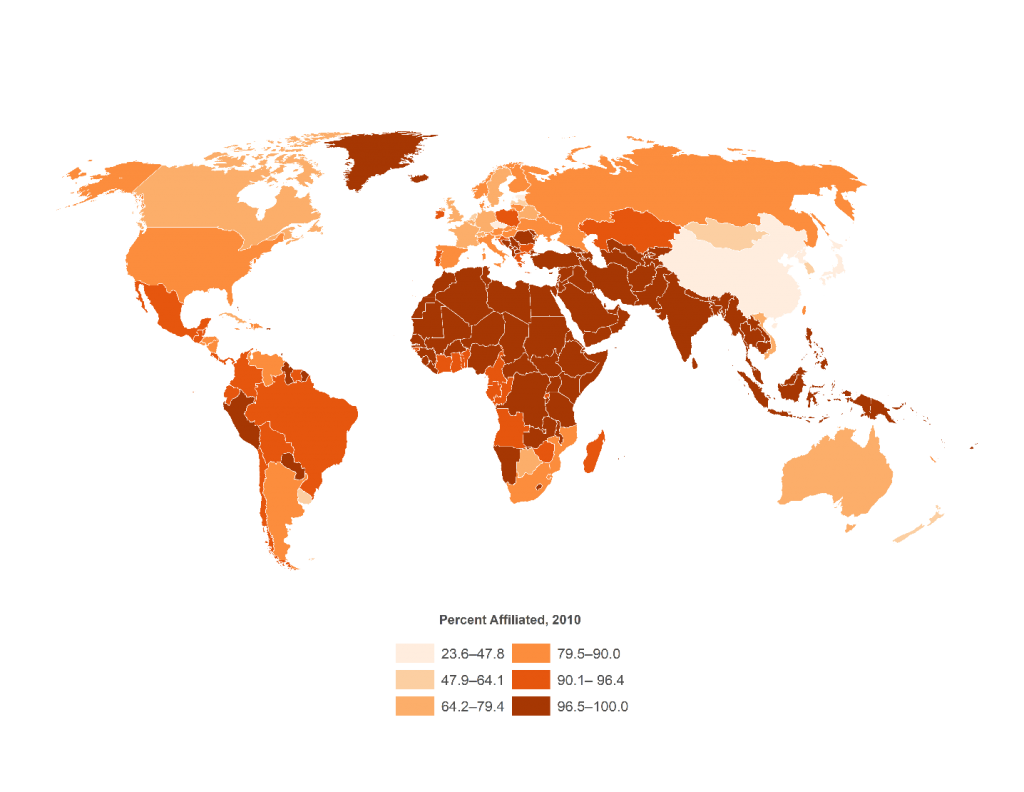 A key aim of our study is to assess the religious composition of those subject to environmental changes, and how gaining an understanding can help to craft environmental policies that are more effective in fighting climate change. This aspect is especially relevant in the poorest nations of the world, where close to 100 percent of the population ascribes to a religion, and where religion plays a very important role in providing basic services and social cohesion.

Further, the study looks into the role of religion in shaping human behavior. Religious change can affect social cohesion, consumption trends and willingness to pay for climate-change mitigation or adaptation initiatives. Our findings indicate that religious affiliation relates to greenhouse gas emissions, energy use and gross domestic product on a global scale. Countries with more emissions and greater GDP tend to be less religious, have less population growth and to be better prepared for environmental challenges. Conversely, countries with a greater proportion of religiously affiliated tend to have younger populations, higher environmental risks, lower GDP and lower preparedness levels.

Nations that are more religious may behave differently as they develop economically and technologically. This implies that international disagreements based on religious beliefs, values and viewpoints may play strong roles in the future.

The lowest level of energy use per capita, for instance, is observed among Hindu-dominated countries. The lowest climate-change adaptive capacity is found among countries with Muslim or Hindu majorities. It is conceivable that risk perception, and therefore preparedness, among these religious groups differs from those in other groups. This finding has been backed by previous research.

On the other hand, where the religiously unaffiliated are in majority, levels of climate-change adaptive capacity are the highest. Also, the World Risk Index is lowest for the religiously unaffiliated. In terms of risk of future water shortages, owing to their geography, climate and population dynamics, countries dominated by Muslims and Hindus have the highest levels of water stress. Christian and Buddhist countries have the lowest levels.

As the impacts of climate change become greater, the world is becoming more religious; the share of the world population with a religious affiliation is expected to rise, from 84% in 2010 to 87% by 2050. The world is also becoming more polarized in regard to how different nations affect the environment, with high and growing emissions shares from Europe and China, both regions with a high share of people without religious affiliation.

How exactly growth in the importance of religion might translate to climate policy and the future evolution of the climate system remains to be seen. Since religion may influence which policies are most effective and plausible, it is important to understand the evolution of the religious composition of the world alongside environmental changes. Furthermore, the ethical dimensions of climate change—namely the ways in which different faith traditions disproportionately contribute to or are impacted by climate change—will likely receive growing attention. Finally, identifying effective ways to communicate environmental issues and risks within faith traditions, and encouraging inter-faith and religious-nonreligious collaboration, will be important for addressing future global environmental challenges.

Vegard Skirbekk is a professor at Columbia Aging Center, Columbia University and a senior researcher at the Norwegian Institute of Public Health. His research focuses on understanding the links between aging, health and individuals productivity in countries undergoing demographic change around the world.

Susana B. Adamo is a research scientist at the Center for International Earth Science Information Network (The Earth Institute, Columbia University) and an adjunct assistant professor in the Undergraduate Program in Sustainable Development in the same university. She is also co-coordinator of the Population and Environment Research Network (PERN), and former member of the Scientific Advisory Committee of IAI (Inter American Institute for Global Change Research).