In recent weeks and months, Donald Trump, the property magnate and U.S. presidential candidate, has routed opponents in the Republican Party. What is the key to his success? Perhaps we will have to wait for post-campaign analyses for a satisfying answer to this question. What can be observed at this stage of the 2016 Presidential Campaign is that Trump shares an unlikely commonality with the man he is trying to replace in the White House.

Both Obama and Trump share an unshakable attachment to American exceptionalism; the idea that since its inception, the American experience has been unique and unrivalled in a world of nations. It was Michael Billig’s ‘Banal Nationalism’ (1995) which first exposed the linguistics of everyday nationalism. Billig reminded us that there is the need to correct the view that nationalism is peripheral in western society; that it is ‘extraordinary, politically charged and emotionally driven’ (Billig, 1995, p.44). Secondly, Billig (Ibid, p.47) asks: Why is it that ‘we’ in the ‘settled nations’ who are not labelled nationalist, do not forget our national identity outside major national events? He responds by claiming that nationalism is a ‘form of life’ which is ubiquitous and taken for granted. Anthony Smith’s (1986, pp.15-30) ‘myth-symbol’ complex is ‘mindlessly remembered’ (Billig, 1995, p.44).

Murray (2013, p.18) identifies four values, which constitute a banal American exceptionalism: industriousness, egalitarianism, religiosity and ‘an amalgam of philanthropy and volunteerism’. Although Hodgson (2010) has challenged the normative basis of American exceptionalism, there has been relatively little attention to how candidates and presidents employ the rhetoric of American exceptionalism (Neumann & Coe, 2011). Since the initial wave of declinist anxiety in the late 1970s (Brooks, 2013, p.132), the unnamed ‘daily reproduction of the United States’ has proved unproblematic. 2008, the year that an African-American proved victorious, provides a cursory glimpse into the role of everyday nationalism in campaign rhetoric:

‘I want us to take up the unfinished business of perfecting our union, and building a better America … Together, starting today, let us finish the work that needs to be done, and usher in a new birth of freedom on this Earth’.

By employing the literary device of anthropomorphism, the 2008 candidate Obama reified an exceptional America. America is depicted as the only nation capable of accessing cosmopolitanism. This is a contradiction in terms. For former LSE Professor Ulrich Beck (2006, p.57), nationalism and cosmopolitanism are largely complementary, and should not be developed in opposition. For Obama, cosmopolitanism cannot be accessed by all nations. It is America’s destiny to achieve this feat for the rest of the world. This teleological understanding of an exceptional America is evident throughout Obama’s campaign. Teleological aims of ‘perfecting our union’ and ‘building a better America’ are located in national time and space.[1] The national telos ‘serves as the transcendent ideal which undergirds America’s actions’ (Leeman, 2012, p.16). Over the past year, Trump has also constructed a scared national telos. His overriding mission, as we are reminded every time he steps up to the podium, is to ‘make America great again’. This is also the title of his unofficial manifesto (Trump, 2015). In F.A. Hayek’s terminology, the nation must be a telos, not merely a nomos (Tucker, 2016).

The reification of the nation, through the use of proper nouns and the definite article, was evident throughout the twenty one months of Obama’s 2008 campaign. Neumann and Coe (2011, p.15) point to the distinction that presidents can draw by referring to the nation as ‘America’ or the ‘United States of America’, as opposed to ‘this nation’. Obama presupposed that his audience is aware of the same America he is referring to in both his first and last campaign speeches. However, Obama is not alone in doing this. Obama, like Trump today, and those successful candidates before him (see Figure 1), was simply making himself electable.

In The Cosmopolitan Vision, Ulrich Beck (2006, p.70) claims that ‘the most popular of personal pronouns, the mystical and menacing “we”, has lost much of its global appeal’. He asks, ‘Which “we” do we mean when we speak of the “we”?’ For Beck (Ibid, p.26), there are no single answers to these questions; questions which remain unanswered throughout one’s life. On the other hand, Billig, (1995, p.90) despite noting the ambiguity of the pronoun ‘we’, highlights its continued resonance for a banal American exceptionalism:

‘“We” must recognise the rights of others, whilst speaking for these others, and while reminding “ourselves” that “we”, the greatest nation in history, stand for “our” own interests.’

In Fairclough’s terms (2013, p.36), the pre-existence of an ‘American people’ operates as background knowledge:

‘Our nation is at war. Our planet is in peril. Our health care system is broken, our economy is out of balance, our education system fails too many of our children, and our retirement system is in tatters’.

First-person plural pronouns, parataxis and asyndetic listing are used to signify how the protection of national possessions is prioritised. This is axiomatic; presented as a simple fact. The American electorate are momentarily implicated in the adverse consequences of global climate change. However, this commitment is under siege. America may indeed speak for the world, but its domestic commitments are prioritised. This duplicity was rehashed, albeit much less subtly, when Trump announced his presidential candidacy. Today, Trump pushes nativism, national identity and protectionism (Tucker, 2016):

‘Our country is in serious trouble. We don’t have victories anymore. We used to have victories, but we don’t have them. When was the last time anybody saw us beating, let’s say, China in a trade deal? They kill us’

Trump may be inward looking, divisive and to an extent, parochial. However, this bombastic billionaire is briefed with the same mission as his potential predecessor; to strengthen a pre-existing and superior nation-state from within.

Michael Tavares is the Graduate Intern at the Language Centre. In July 2015, he graduated with a BSc in Government & History from the LSE. He is interested in the process of nation formation and how it impacts political communication and policy outcomes.

Posted In: States and Nations | US Election 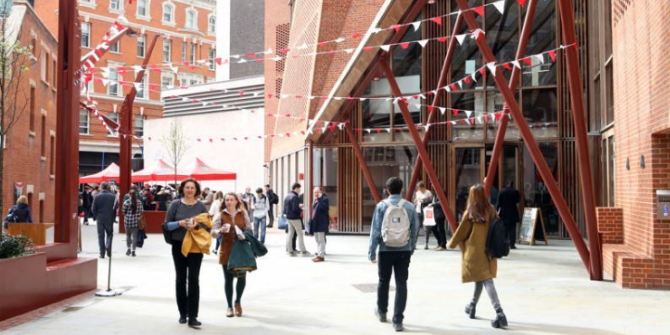