By Chloe Blades, a social activist aiming to uncover the reality of refugees in Britain 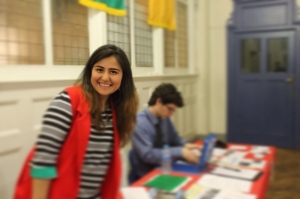 The politics within Afghanistan is turbulent to say the least with conflict spanning centuries, mostly due to its unfortunate positioning as a pawn on the chessboard controlled by the world’s political super powers. With foreign influences entering in and out of Afghanistan from the Soviet Union to America with NATO as its ally, it has been a battleground with only a short era of peace known to our generation.

It would take some determination and dedication to think that you could solely make a difference to those affected by the instability of a country fraught with conflict. Yet that is exactly what Rabia Nasimi, an ambitious 22 year old full-time MSc Sociology student at London School of Economics, intends to do with her dream of “bettering the situation for people in Afghanistan”.

Rabia was 5 when she entered into Britain with her family as a refugee. With limited English language skills between them, Rabia would translate for her father using the English that she knew while he set up the charity that has developed into the Afghanistan and Central Asian Association. One day, she hopes to investigate the relationship between ‘Afghan’ nationalism and minority communities within Afghanistan in relation to war and violence, which she sees has resulted in a national state of confused identity and ethnic conflict.

Her motivation for this study is personal deriving from the Soviet occupation of Afghanistan when her parents left to continue their higher education in Ukraine. Born in Moscow, but on a Ukrainian passport and later living as a refugee in Britain, Rabia is not identified as an Afghan national and subsequently feels the fluidity of the notion of identity.

It is here that the work of Rabia comes into practice as she takes from her personal experiences to assist with rebuilding the identities of Afghan refugees alongside the dedicated team at the ACAA. Here you will find a diaspora of Afghan men and women who are trying to fathom some familiarity after relocating from their homes in Afghanistan to England where, sadly, Western and Central Asian ideologies are often in conflict making the transition difficult.

In order to assist with this transition, Rabia, and countless hard-working volunteers and charity workers at the ACAA, deliver ESOL classes for children and adults, free legal advice and support, courses for women, conferences and seminars, and training for the betterment of useful skills and education. One mentor at the ACAA has recently dedicated her time specifically to a young boy who didn’t speak and struggled to fit in with his new life in England. After working with him for three months using playful tactics his trust in the mentor grew and he now reads and talks. Rabia explains that “his mother, a former teacher in Afghanistan, has struggled to integrate with British society and cannot find meaningful employment. We have helped her with her English skills and we work together with the aim of her finding a place within this society, as we hope for all the people we assist”.

Rabia is on track to making the world aware of the struggles the people of Afghanistan are faced with. She acknowledges that, “the portrayal of Afghanistan is mainly given through the media and the media are usually quick to publish stories of devastation, war and terror as opposed to the more day to day life of the country and its people. I don’t think the portrayal is entirely wrong as the war is ongoing and human rights are lacking, but there is a more stable side to Afghanistan that we don’t get shown, and we should be more optimistic for its future”.

Rabia has raised awareness for Afghan women who are seeking employment by expressing publicly on Ariana TV the challenges women face, and what they need to do to overcome them. For example, there is a taboo against women working in an office with males, and they are more prone and accustomed to work place harassment. It is, therefore, integral to women’s independence and growth that we do what we can to reduce the stigma and promote women who work in a positive and progressive light.

She has also used BBC Afghanistan as a platform for discussing Brexit and the hate crime against refugees that followed explaining how many misinterpreted the referendum. She reinforced the idea that Great Britain is a democracy and a country fueled by mutual respect, free speech, and opportunities for all.

You can see how she continues to raise awareness of the state of Afghanistan and refugees in Britain on her Facebook page https://www.facebook.com/RabiaNasimi/, which showcases her opinions on the topic through her popular blogging platform.

The work that Rabia and the ACAA team have put into improving the welfare of refugees coming into Britain is irrevocably life-changing. If you would like to work with them and put the knowledge, skills, and talents that you have adopted from LSE to use then get in touch at http://acaa.org.uk/volunteerwithacaa.

Is There a Class Issue at LSE?: Episode 3

For Whom The Bell Tolls: it’s us again, the working class