UNICEF estimates that more than 200 million women worldwide have undergone Female Genital Cutting (FGC). Considered by the United Nations a human rights violation, there is worldwide pressure to governments of countries where FGC is prevalent to eradicate this practice. In the last decades, many of them passed laws criminalizing FGC and launched media campaigns and social programs aiming to tackle this harmful tradition. However, despite the large amounts of resources invested, FGC continues to be a social norm in many countries and the World Health Organization (WHO) estimates that 3 million girls undergo FGC every year.

In this study, we use the introduction of a law that banned the practice of FGC in Senegal and DHS data to document, for the first time, the perverse effect that FGC has on girls’ education; and to explore to what extent legal reforms can be effective policies to tackle this practice.

But why should a law banning FGC affect educational investments? We think of four main mechanisms. The first of them is related to the role that FGC and education play in the marriage market. Among ethnic groups practicing FGC, cut girls are perceived as purer and more loyal. In consequence, marriage payments received by the parents of the bride, also known as bride price, are usually larger for cut brides (Karumbi et al., 2017). In some aspects, the effects of FGC on marriage market outcomes resemble those reported for education, which has been found to also increase bride price (Ahsraf et al. 2018). In this context, educational investments could compensate potential welfare losses for the family of uncut brides associated with a reduced bride price. Thus, if the ban increases cost of FGC, some parents may abandon this practice and invest in their daughters’ education instead.

Secondly, FGC may also work indirectly on education through affecting the age at marriage. In the context of a competitive marriage market where parents prefer to marry their daughters as soon as possible after menarche (Wahhaj, 2015), cut girls could be in a better position to marry at a younger age. Since early marriage could lead to early school dropout (Field and Ambrus, 2008), one may argue that FGC could reduce educational investments through lowering women’s age at marriage.

Thirdly, if health during childhood is a strong determinant of returns to education, FGC could also affect educational investments and school dropout through lastingly affecting the health of the girls.

Fourthly, the law might have fostered a deeper change in social norms, broadly improving women’s welfare and the amount of education they receive.

The main challenge when estimating the causal impact of FGC on education is overcoming the endogeneity in the link between these two variables. In order to address it, we use exogenous variation in the prevalence of FGC caused by variation across ethnic groups in exposure to a law that banned the practice of female genital cutting in Senegal. In the Senegalese context, where most of the cuts occur very early in life (Yoder and Wang, 2013), our difference-in-differences strategy relies on comparing girls born before and after the approval of the law that belong to ethnic groups where the practice of FGC is traditional with girls from ethnic groups where FGC was never practiced. While the law is unlikely to affect the education or the prevalence of FGC for the latter group, it might affect the incidence of FGC among girls from ethnic group where the practice of FGC is traditional that were born after the introduction of the law.

A key identification condition of the empirical strategy is that, in the absence of the law’s introduction, the evolution of the prevalence of FGC and educational investments should have been the same across ethnic groups. We can test the feasibility of this parallel trends condition by examining whether the evolution of these variables over cohorts of girls born before the introduction of the law is similar across the different ethnic groups. The latter assumption would be violated, for example, if the prevalence of FGC among some ethnic groups started dropping among cohorts of girls born before the law’s introduction. Figures 1, 2 and 3 support the parallel trends condition. They show that the evolution of both the prevalence of FGC (Figure 1), the probability of never having attended school (Figure 2) and years of education (Figure 3) for cohorts of girls born before the introduction of the law was similar across ethnic groups where FGC is traditional and where it is not.

Figure 1: Prevalence of FGC by year of birth and ethnic group 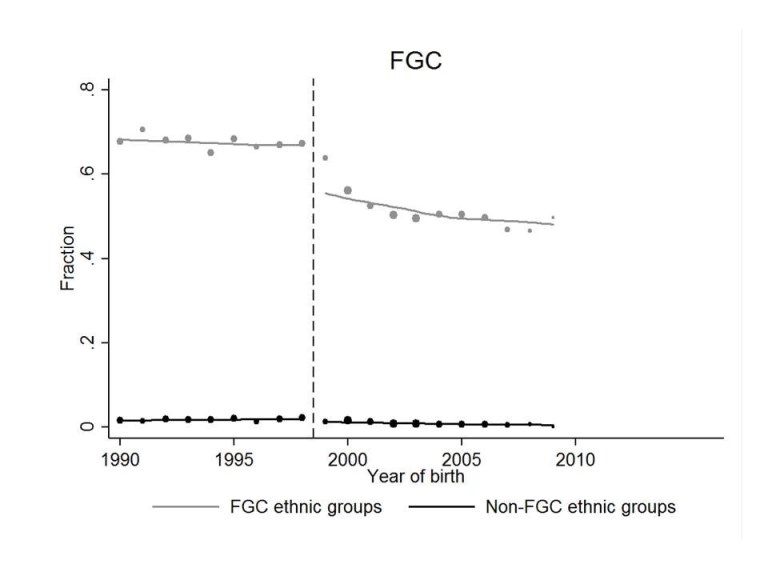 Figure 1 also suggests that the law, which is interpreted as an increase in the cost of cutting, had a large beneficial effect on the prevalence of FGC. The analysis conducted shows that girls from ethnic groups born after the introduction of the anti-FGC legislation that belong to ethnic groups where the practice of FGC was embedded in their culture experienced a drop of 16 percentage points in the probability of experiencing FGC. A large and statistically significant effect of the law on the prevalence of FGC is also an identification condition for the estimation of the effect of FGC on educational investments.

In Figure 2, we observe that the drop in the prevalence of FGC caused by the law led to a reduction in the probability of never having attended school among girls from ethnic groups that traditionally practice FGC. The two-stage least squares estimates show that FGC reduces the likelihood that girls have ever been in school (the extensive margin), an effect which is statistically significant at conventional confidence levels across the different specifications. On the other hand, Figure 3 suggests that the effects of FGC on how much education girls attained (the intensive margin of educational investments) was limited, and although it seems to affect the probability of receiving one or two years of education, experiencing FGC does not affect the likelihood of receiving three or more years of education.

Figure 2: Probability of never having attended school by year of birth and ethnic group 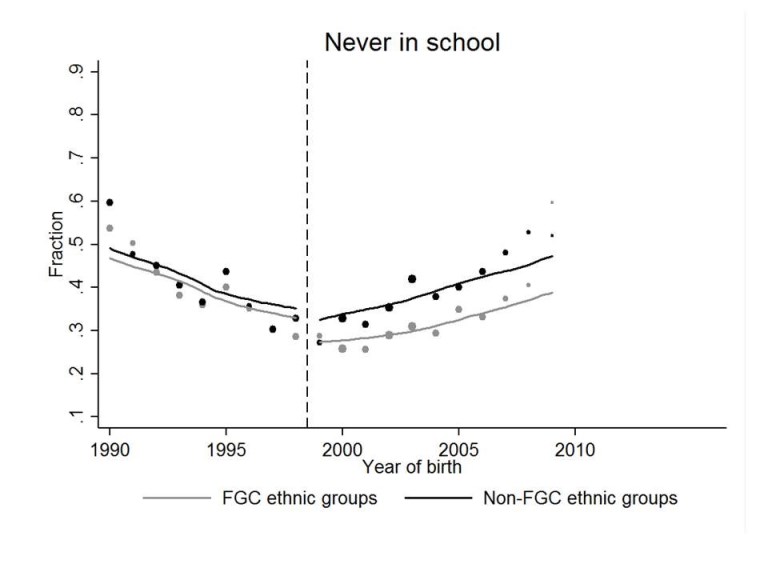 Figure 3: Probability of receiving at least X years of education by year of birth and ethnic group 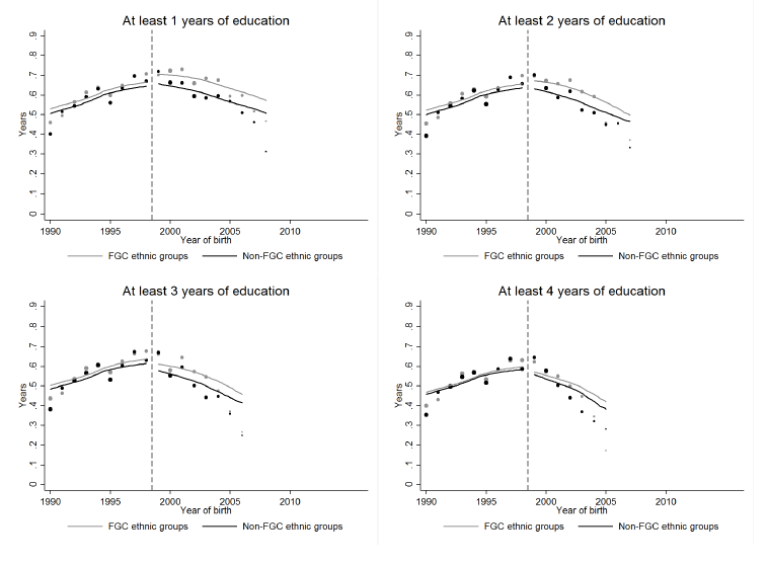 Consistent with the marriage market mechanism described above, we also find that the law affected educational investments only in rural areas, where the value of FGC in the marriage market is larger. On the other hand, the findings rule out alternative mechanisms to explain why the law raised educational investments such as better health, a broader change in gender norms or fewer adolescent girls leaving school to get married.

We then examine the robustness of the results to different falsification tests: we rule out the possibility that the effects are driven by a higher degree of underreporting of FGC among girls born after the introduction of the law, by pre-law differential trends in the prevalence of FGC or educational investments across ethnic groups, or by a larger percentage of late school initiation among ethnic groups where the practice of FGC is sparse. Furthermore, the results are also robust to a placebo test examining the effects of the law on boys without any sister born after the introduction.

The paper makes three contributions to the literature. Firstly, it shows that even in settings where the capacity of institutions to enforce the law is limited, legal reforms can contribute to tackling traditional practices deeply rooted in tradition, although they might not be enough to eradicate them. Secondly, the paper documents for the first time the causal negative effect of FGC on girls’ education. Interventions that successfully reduce FGC could also foster human capital accumulation among women. Finally, the paper contributes to widening our understanding of this practice by showing that household decisions on whether to cut their daughters seem to be sensitive to increases in the relative costs of FGC and education.

The full paper on which this blog is based can be found here.

Jorge García Hombrados is an Assistant Professor at the Universidad Autónoma de Madrid. He is also affiliated to the Max Planck Institute for Demographic Research.

Edgar Salgado is a consultant at the Inter-American Development Bank, within the Strategic Development Effectiveness division, where he conducts impact evaluations.