Precarious workers are among the group that the coronavirus crisis hit hardest. The UK prides itself on having a particularly unregulated labour market — which, in the aftermath of the 2008 financial crisis, facilitated an explosion of precarious work in the form of temporary work, agency work, unpaid internships, zero-hour contracts, self-employment and involuntary part-time work. Such insecure working contracts allowed corporations to take fewer risks in a more competitive and difficult post-crisis environment. Yet, such flexible working arrangements weaken workers’ rights and security. 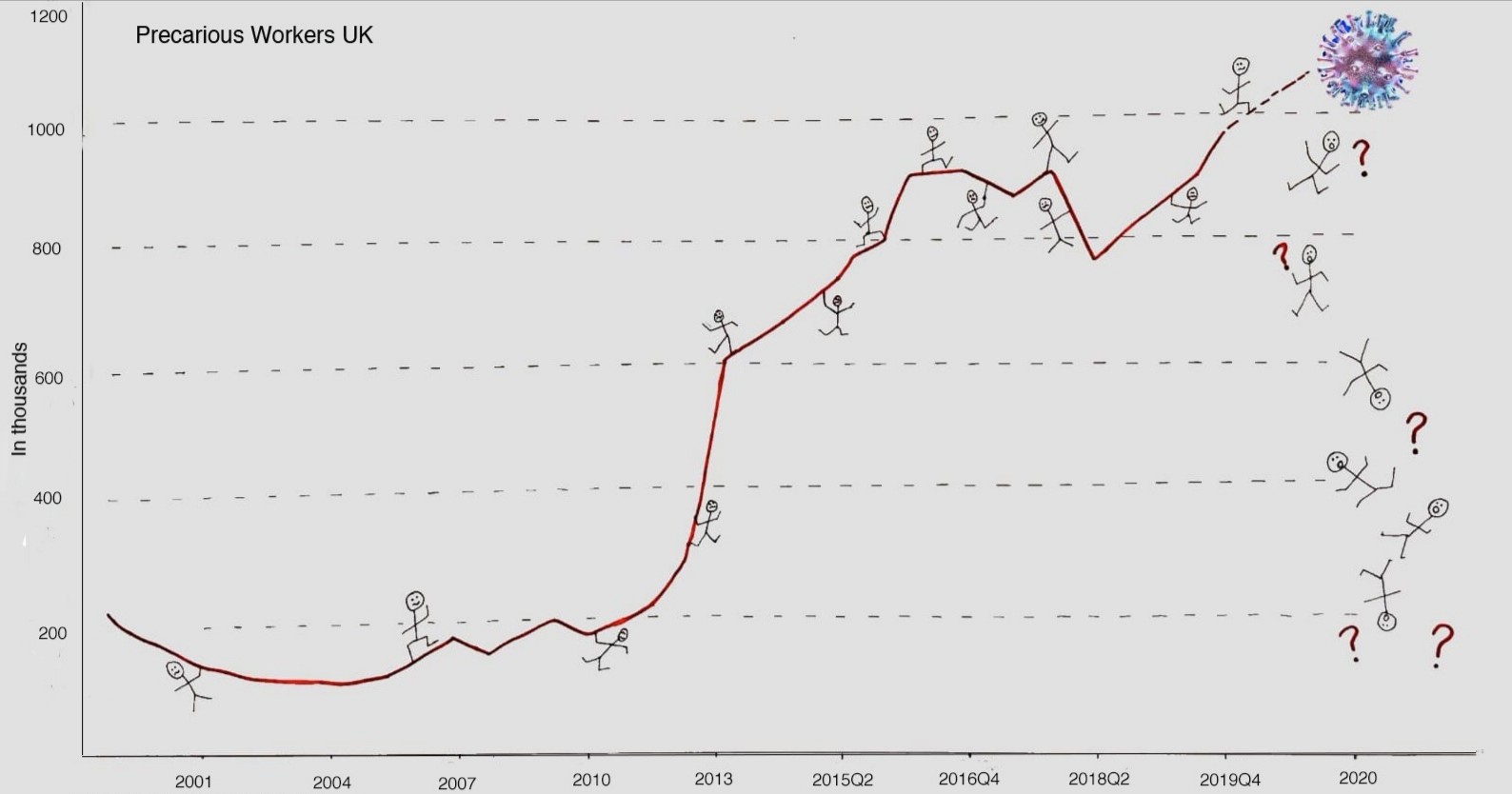 Illustration based on graph of the number of workers, in thousands, who report being in a zero-hour contract in Office for National Statistics Labour Force Survey 2019.

The coronavirus crisis invites concerns about welfare of precarious workers, many of whom qualify as key workers. Official National Statistics data show that women who are domestic workers, work in the caring, leisure and other service occupations are significantly more likely to die from coronavirus. ONS data also show that taxi drivers and bus drivers have some of the highest rates of death from Covid-19 among men. Many of these precarious workers risk their lives for low pay and few employment rights.

Furthermore, work precarity induces fear about refusing work. The coronavirus crisis amplifies those threats. If workers cannot afford to self-isolate, the virus is more likely to spread. Offering vulnerable workers more support is therefore crucial — as manifest in The Independent Workers Union of Great Britain (IWGB)’s suit against the Government for its failure to protect millions of precarious workers.

Despite the Government’s response to the coronavirus crisis, many precarious workers are still without adequate support. Normally, precarious workers would be ineligible for universal credit. Although the UK government revised this exclusion, the scheme remains meagre. One person I spoke to waited five to six weeks for her first payment.

Analogous schemes fall similarly short. The Job retention scheme includes those classed as an ‘employee’ under UK tax laws, which excludes many precarious workers. The scheme drew ire because it disbursed money to corporations rather than employees. Under the new self-employment scheme, many have not been receiving income for 3 months. The scheme excludes those who make less than half of their income through self-employment or who recently changed the basis on which they work and therefore covers only 62% of self-employed people. A woman I interviewed was ineligible for the self-employed scheme, as she had been self-employed for only a year. She was also not able to use the Job retention scheme due to the casual zero-hour contract she was on in her second job. She could afford to live off universal credit alone; however, large families, could not.

The coronavirus crisis is putting many more at risk of precariousness. Precarious work spread in the aftermath of the last financial crisis, and the International Money Fund (IMF) predicts this crisis to be the most devastating global economic crisis since the Great Depression.

However, there are reasons for optimism. First, the rhetoric of a ‘safety net’ may be returning to British politics for the first time in decades. Rishi Sunak, the Chancellor of the Exchequer, spoke in his first budget speech about a ‘strengthened safety net’. Given the previous cuts to social welfare and the shortcomings of government action so far, the possibility for a stronger safety net may seem doubtful; however, social solidarity shown across the UK is undeniable. On a Thursday at 8pm many were applauding NHS frontline staff, carers and all essential workers in this crisis (many of whom are precarious workers). Solidarity is also displayed through individuals coming together to help vulnerable communities. Thus, there is hope that this social solidarity will pressure the government to strengthen the safety net for all.

Finally, the coronavirus crisis undermines the neoliberal ideology which has dominated the UK’s politics for decades. The idea that we are each individually responsible for our own livelihoods and economic destinies has legitimised an increasingly unregulated labour market and drastic cuts to social welfare. Yet such ideas seem ludicrous when the coronavirus crisis has shown just how interrelated our society is.

Therefore, in the aftermath of this crisis, unlike the financial crisis of 2008, we should heed Polanyi’s (1944) warning: we ought to put human welfare and the natural world at the fore, and strengthen the safety net for all.